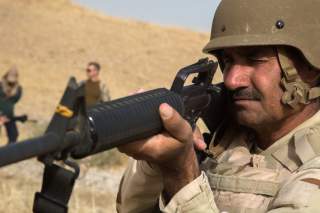 The United States and its local Arab, Christian and Kurdish allies—the Syrian Democratic Forces (SDF)—in northeastern Syria are preparing to attack Raqqa, the reportedly heavily defended last bastion of ISIL. The current plan is that U.S. forces will train, arm, advise and support the SDF, who will then bear the brunt of the direct fighting to liberate and then secure the city. There is an emerging risk, however, that U.S. forces will be drawn more directly into the fight and subsequent pacification of northeastern Syria. Though U.S. spokespersons have made clear their preference for the former, the risk of the latter is growing because Turkey is emphatically opposed to U.S. cooperation with the Kurds. Indeed, Turkey suggests that it should work with its own Syrian allies to liberate and pacify Raqqa. So, it would be a great irony if Donald Trump, who campaigned in part on his opposition to costly direct U.S. interventions into internal conflicts, lead the United States into yet another quagmire, to assuage Turkey’s concerns.

Though the United States has worked assiduously to cultivate the image (and presumably the fact) of a genuinely multiethnic and multi-confessional anti-ISIL SDF coalition, it is apparent that the most reliable fighters are the Kurds. It is not plausible that an attack on Raqqa can succeed without an enthusiastic, large scale Kurdish participation. And given what we know about how hard it is to overcome the prepared defenses that ISIL employs in city fighting, it is necessary to provide the Kurds with meaningful quantities of heavy weapons, including armored fighting vehicles, antitank guided weapons and heavy mortars—even if there is considerable U.S. fire support from artillery and airstrikes. After Raqqa falls, Kurdish forces will also be necessary to consolidate the victory and to pursue ISIL remnants as they try to exfiltrate the battlespace, burrow into smaller villages and organize for revenge. Put simply, if the Kurds are not better armed and do not participate intensively in the battle, Raqqa can probably not be taken without significant and direct U.S. participation at the forefront of the fight. After the fight, these same U.S. forces would be left holding the bag for the pursuit and suppression of ISIL remnants.

It is always difficult to predict how a battle with ISIL may unfold because, for its own reasons, the terror group fights intensely at certain times and places, but not at others. But presuming that there are several thousand fighters in Raqqa and ISIL plans to defend the town as intensely as it has defended Mosul, then it is likely that the United States would need at least a brigade’s worth of combat power—several thousand personnel with tanks and supporting armored fighting vehicles—to break the defenses. This assumes that local allied forces can hold the perimeter around the town and consolidate captured ground. If they cannot, it is entirely plausible that this estimate is too low. The second battle of Fallujah required two brigade-sized units of U.S. Marines, reinforced with two Army heavy-mechanized battalions, to take the city.

That 2004 battle resulted in a relatively high number of U.S. casualties—seventy dead and six hundred wounded. U.S. troop numbers in Syria have already risen to nearly one thousand, including special operations forces and a task force of U.S. Marines to provide artillery support. Given the incremental way that U.S. deployments to Iraq unfolded, we are entitled to suspect that additional U.S. forces will be dispatched to Syria even if the United States sticks with the SDF/Kurdish option. Without the Kurds, the United States would need even more troops.

Why would the United States choose to have its own forces bear the brunt of the Raqqa fight? Turkey mistrusts the Syrian Kurds and assumes that there is no difference between the Syrian Kurds and the Turkish Kurds, with whom they are at war. Turkey is a NATO ally, and the first instinct of establishment U.S. security officials, such as Secretary of Defense Mattis, is to protect the alliance as an institution, which includes Turkey’s loyal membership. Turkish officials have delivered increasingly vehement warnings that the United States ought not to rely too heavily on the Syrian Kurds for the Raqqa fight and the subsequent political and security stabilization of northeastern Syria. Turkey proffers vague and seemingly impractical schemes by which their Syrian-Arab allies, whoever they are, accompanied by Turkish troops should lead the Raqqa battle and presumably manage the aftermath. Judging from maps of the fighting, this could only occur if the United States coerced Kurdish forces into stepping out of the way and allow the Turks and their allies to reach Raqqa. Put another way, Turkey is demanding that the United States abandon and betray its Kurdish allies in the hopes that Turkey and its allies can do the job in Raqqa. Thus, the only alternative that ensures a victory in Raqqa, and keeps the Turks onside, is for the United States to bear the brunt of the Raqqa fighting and to remain thereafter to secure the victory.

Clearly, the United States is trying to persuade Turkey to accept the Kurdish role in the preferred U.S. plan. Presumably inducements, fig leaves and promises are on offer and the Turks may, in the end, accept the U.S. position. But if they don’t, President Trump may get a test of his “America First” principle. The U.S. national interest is that the local forces, including the Kurds, bear the brunt of the Raqqa fight and subsequent pacification effort. Turkey has a different interest. It claims a willingness to do the job itself alongside Syrian allies. Though the Turkish army is formidable, their Syrian allies are not, and their ability to deliver Raqqa is doubtful. Moreover it is implausible that the Turks would—or their allies could—stabilize northeastern Syria after Raqqa’s liberation. In the end, if Turkey cannot be assuaged and the Trump administration remains committed to the SDF lead attack on Raqqa, Turkey will need to be ignored, and perhaps even deterred from interference. Turkey presumably has unspecified retaliation in mind against the United States and its allies, in the event that their wishes are ignored. Turkey should be made aware that retaliation goes both ways. Alternatively, the United States can honor Turkey’s concerns, which means that U.S. forces could, by default, end up leading the fight for Raqqa. Turkey first, America second.

Barry R. Posen is the Director of the Security Studies Program at MIT.