Syria: The Case for Interest-Based Diplomacy 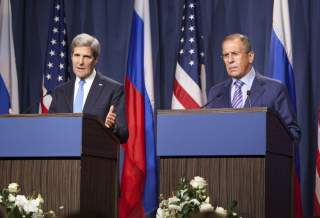 The undoing of the Syria agreement with Russia caps off a rough few weeks for American diplomacy. Historically, though, the United States has enjoyed great diplomatic successes when engaging in smart diplomacy with an eye towards achieving key interests. The peaceful reunification of Germany, the opening of China, and assembling the coalition for the first Gulf War were among the many achievements generated under this interest-based diplomacy.

It is only in the post-9/11 world that the U.S. has treated military power as the preferred and often only tool of statecraft, a policy which has been an abject failure.

Despite vast and prolonged military commitments in Iraq and Afghanistan, we are further from victory today than we were in the early years of those conflicts. Similarly, a massive aerial and drone campaign against terrorists in places like Yemen, Pakistan, and Iraq has not prevented the spread of either Al Qaeda or ISIS.

The bloody end of the recent Syrian ceasefire was the latest humiliating blow to U.S. efforts to broker a deal with Russia. After threatening to break off negotiations if Russia continued airstrikes in Aleppo, Secretary of State John Kerry was soundly mocked—by his own side no less.

Senators John McCain and Lindsey Graham sarcastically called his threat “a real power move in American diplomacy.” For their part, the Russians suggested the U.S. delegation was having an “emotional breakdown.”

While Secretary Kerry has made a herculean effort to produce a political solution to Syria, the criticism has a point. It is hard to see how a walkout would compel Russia to concede what it views as a winning strategy that preserves its core interests.

In framing the Syrian negotiations, the United States has so far been making moral arguments about Assad’s war crimes while the other parties are very much looking at their bottom line. U.S. diplomats have failed to articulate the key interests we are pursuing in Syria, define what an acceptable and realistic negotiated outcome might look like, or attempt to bridge the glaring divide with Russia on preserving Assad’s government. Without acknowledging that others only care about how Assad advances their objectives rather than his behavior as a moral actor, the talks were doomed before they started.

Nations generally speak in principles but act on interests, and U.S. diplomacy prospers when it acknowledges this reality.

Consider the Iran deal. Though the long-term outcome is far from guaranteed, and it would be naïve to think the administration acquired all possible concessions, it represents a unique instance in recent U.S. history of significant cooperation with an avowed enemy on the basis of mutual interest. Even senior Israeli military officials were pleasantly surprised. Gadi Eizenkot, the commander of the Israel Defense Forces, called it “a historic turning point,” and Ephraim Halevy, the former head of the Mossad, said it “blocks the road to Iranian nuclear military capabilities for at least a decade.”

The deal ultimately came to be because both sides were willing to shelve the rhetoric in meeting their core objectives. The United States ignored the Iranian government’s support of terrorist groups and Shiite militias across the Middle East to achieve its key goal – preventing an Iranian bomb. Similarly, the Iranians insisted for years that they had the legal right to pursue nuclear power. Ultimately however, they prioritized the tangible gains of economic relief and an end to the threat of a military attack over that “right.” So far, Iran has fully complied with the terms of the agreement, compelled by economic interest rather than goodwill.

U.S. efforts that have prioritized ideology over core interests have mostly yielded disastrous results. In the early stages of the Syrian revolt, the U.S. insisted that Assad must go, an unacceptable condition to him and his allies. This Pollyannaish stance arose from the “Washington playbook” derided by President Obama, which calls for bold proclamations followed by militarized responses, often with no consideration for national interests at stake. This policy not only encouraged opposition groups to take up arms with a mistaken expectation of direct U.S. assistance, but also led the regime’s allies to escalate their support in challenge to America’s stated goals.

That same year, the U.S.-led coalition went beyond its UN mandate in Libya to prevent a massacre in Benghazi and instead toppled Muammar Gaddafi’s government. This ultimately proved disastrous. Since 2011, the various rebel militias have fought each other for power, rendering Libya a failed state. The aftermath of this seemingly successful operation should stand as a warning about the folly of idealistically expecting to remake the Middle East by helping the “good guys” win internal struggles.

While hawks argue that diplomacy is also bound to fail, as they did repeatedly during the Iran negotiations, diplomacy, properly applied, can achieve much. Regardless of how one might assess the Iran deal as an agreement, it proved we can extract concessions from our adversaries and achieve key objectives without military force. While the subtext of force is important to give heft to diplomatic efforts, it is far more effective when used as a last resort and only to advance clear strategic goals.

A return to the smart, interest-based diplomacy that characterized U.S. foreign policy during the Cold War is essential for making progress on intractable problems.

Particularly in dealing with other nuclear powers, coming to terms through diplomacy is the only way to safeguard our interests while preserving peace.

Military strikes will not be the ultimate solution to terrorist groups like ISIS or rogue regimes like North Korea. Instead, these problems must be handled through savvy and pragmatic political solutions that align the interests of regional actors and the United States to produce lasting stability.