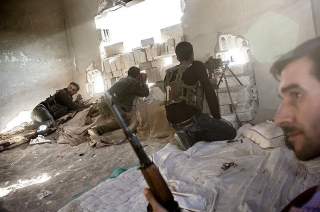 According to the Washington Post, there is already a lively debate among Secretary of State Hillary Clinton’s foreign-policy advisers about what is to be done in Syria if she becomes the next president. Arguments are between those who call for more U.S. engagement—specifically in support of a safe zone for refugees and/or a no-fly zone—and those who fear that these measures are fraught with risks and are ineffective to boot.

As I see it, the first step ought to be a declaration that the United States is no longer seeking coercive regime change, but rather—for now—only a cessation of hostilities, leading to a negotiated settlement among the main parties involved. For the first four years of this tragic civil war, the United States insisted that President Assad had to leave as a precondition for negotiations; for the last year and a half, the United States has continued to hold this position but rephrased it to allow for some wiggle room. The position was based on the neoconservative theory that the United States’ mission is to push over those regimes that stand in the way of the global march to democracy (in Francis Fukuyama’s words, those still “stuck in history”) and the belief that the Assad regime was teetering on the brink of collapse anyway. It turns out that Assad held on and is gaining. Above all, we learn—surprise!—that when you demand that the leader of the party you need to deal with remove himself from power, he is most unlikely to accommodate you. (Nor has anyone explained why the United States believed that whoever would have replaced Assad would be any better.)

The same ambition also led the United States to keep looking for liberal, pro-democracy rebels to ally itself with, which turned out to be the smallest and weakest group of the lot, and not a very liberal one either. The humanitarian purpose of saving hundreds of thousands of lives and stopping millions more from being displaced and driven into neighboring countries and to Europe, should be the United States’ first goal. There is no way to reach this goal in the near future and to avoid Assad being part of a settlement, if one can be reached at all.

The second reason to change the United States’ focus is Russia. In some right-wing fantasy, the next president “stands up to Russia” and pushes it back out of Ukraine and the Middle East. In the real world, Russia is deeply invested in Syria and in the Assad regime. After the United States occupied Iraq, Russia lost one of the few nations in the Middle East over which it had a considerable measure of influence. Next went Egypt. Assad’s Syria is the only ally that Russia has left in the region (if one disregards its warming relations with Iran) and the only place in the Mediterranean where it has a major naval base and now an airbase. Keeping Assad in place is much more important to Russia than his removal and the dismantling of his regime are to the United States. Moreover, there is—like it or not—no pathway to ending the civil war without Russia’s cooperation. This is another reason the United States should let Assad stay for now, if he agrees to end the civil war and negotiates the partition of the country. (Granted, if he keeps gaining ground, any such deal might be hard to negotiate. Hence, the urgency of moving ahead with the quest for a settlement, which involves working with Russia rather than castigating it.)

True, Saudi Arabia and Turkey will be displeased. However, the Saudis have done little to contribute to a solution in Syria, they badly need U.S. support in the troubled war in Yemen and they are struggling with the drive to enact significant domestic reforms. They will overcome their disapproval. Turkey has been such a troublesome ally that not yielding to one of its wishes might show them that the United States is finished turning the other cheek. If that means Turkey stops participating in the fight against ISIS, and stops bombing the Kurds and removes its troops from Syria, the Middle East may well be better for it.

Next, the United States, working with other parties in the region, should recognize the need to redraw the map of what is now Syria and Iraq. The Kurds (the only real ally the United States has in this region other than Israel) deserve at least a fully autonomous region, if not a state. The Sunni parts of Iraq should be given a high level of autonomy, including the right to form their own self-defense units. Syria itself ought to become a federation of “states,” whose borders should be the subject of the multilateral negotiations. Finishing off ISIS as a territorial entity will become much easier once the other various fighting groups find out that they will have a place in the federated Syria.

One may disagree about some of these suggestions but the main point still stands: the United States’ goal should be ending the civil war and negotiating a redrawing of the map, rather than regime change. And there is no hope for progress without working with Putin’s Russia, however distasteful this may be.

Amitai Etzioni is a University Professor and Professor of International Relations at The George Washington University. His newest book, Foreign Policy: Thinking Outside the Box, was recently published by Routledge.