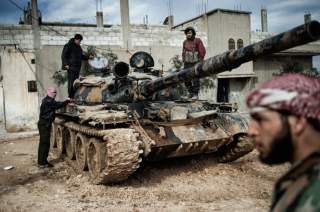 Two astute observers of the Middle East Robert Ford, former U.S. Ambassador to Syria, and Frederic C. Hof, senior fellow with the Atlantic Council’s Rafik Hariri Center for the Middle East, recently wrote two consequential articles on Syria. Both underscored that the Syrian regime has lately faced serious setbacks. Whereas Ford argued that increased dissent within the inner circle of the regime manifest signs of weakness that may spell the beginning of its end, Hof argued that the time has come for United States to exercise its leadership to put Syria on a path to stability and legitimacy. He explained that sustained U.S. diplomacy and leadership is required to assemble regional ground forces to sweep ISIL from Syria, permit a real government to emerge in free Syria, build a Syrian National Stabilization Force and stop Assad from terrorizing his population.

Ford and Hof’s arguments are sensible. But they leave out important questions related to not  inconceivable plans concocted by Iran on one side and Turkey and Saudi Arabia on the other. These questions deal respectively with the future nature of both the Syrian regime and the Syrian opposition, and by extension the future of the Syrian state. These apparently coterminous and simultaneous ongoing plans are consequential not only for Syria but also for the region.

Contrary to conventional wisdom, the Syrian regime cannot be narrowly explained as an Alawi regime ruled by the Assad dynasty. During the reign of the late Syrian president Hafiz al-Asad, the security of the regime rested on a military-merchant complex at the center of which had been a symbiotic relationship between Alawi military officers and Sunni merchants. The elder Assad steadied this relationship by checking and balancing the power of Alawi security officers against the patronage his state offered to Sunni merchants. In other words, Assad’s infamous iron fist rule was in no small measure predicated on preventing divergent interests among and between his officers and his Sunni merchant class base of support.

The assumption of power by Bashar al-Assad in 2000 inaugurated a short era of political liberalization that evolved into what came to be known as the Damascus Spring. Significantly, the swiftness with which the reform movement spread took the regime off-guard. The regime feared that the trickle of reforms it allowed could cause a flood, sweeping it away in the process.

The regime thus reverted to its “time-honored” method of using violence and arresting reformers in the name of defending national and Arab security and rights. What the regime failed to do was to cope with or adapt to the unfolding momentous events that swept the region. As a result, the edifice of the regime that more or less rested on the delicate balance among the security lords and their extended clans, upheld by the Assad family, began to crack.

The death of General Ghazi Kana’n started the slow disintegration of the regime. A former intelligence chief in Lebanon, director of Political Security Directorate, and interior minister (2004-05), Kana’n died in October 2005 under suspicious circumstances. The timing of his death coincided with the beginning of the probe of the murder of former Lebanese Prime Minister Rafiq Hariri.  Assad’s critics asserted that Kana’n was murdered because he was a liability for the regime in relation to the assassination of Hariri.

The next major event that shook the regime was the bombing of the National Security Headquarters in Damascus in July 2012, which took the lives of senior regime figures, among whom were General Asef Shawkat, brother-in-law of President Assad and deputy defense minister; General Dawoud Rajiha, defense minister; General Hassan Turkmani, assistant to the Vice President Farouq al-Sharaa and former defense minister; and General Hisham Ikhtiyar, director of the National Security Bureau. The regime was only able to withstand the murder of some of its security pillars and the multiple opposition offensives because of Hezbollah’s heavy military intervention, which seized the strategic city of al-Qusayr near the Lebanese border.

Since then, Hezbollah and the Iranian Revolutionary Guards’ military involvement on the side of the Syrian regime has steadily grown. In fact, the regime temporarily reclaimed the military initiative thanks in no small measure to the military help of its allies and the infighting among the Syrian opposition, especially among the Islamists. Nevertheless, the newly acclaimed confidence of the regime has been tampered by the reality that its survival has become more dependent on Iran (and its allies in Iraq) and Hezbollah’s military involvement and strategic guidance. More specifically, Iran and Hezbollah have become partners in, if not the proprietor of, the regime’s strategic decisionmaking process. In fact, the Israeli attack on a Hezbollah and Iranian high level convoy reconnoitering the Syrian-controlled sector of the Golan Heights in July 2015 underscored the strategic depth of their involvement.

This involvement widened the rift in the edifice of the Syrian regime. A series of events and developments provided enough circumstantial and concrete evidence about the deepening rift within the regime and consequently the disintegration of the Assad ruling dynasty. The fortune of the Assad dynasty sank to a new low when, in March 2014, Hilal al-Assad, a cousin of Syrian President Bashar al-Assad, was killed during fighting in the border town of Kasab in Latakia province. Hilal founded the National Defense Army, a group of pro-government civilians fighting alongside the Syrian army.

Muhammad was well known as the mob boss of the Assad family in charge of trafficking drugs among other illicit things. Significantly, on April 13, 2015, military police traveled over 140 miles from the Syrian capital Damascus to Latakia to hunt down Munther al-Assad, another cousin of the president. Reportedly, the president himself had ordered the arrest of his own cousin for alleged illegal activity. Even for someone with little knowledge about Syria the pretext of the arrest order was preposterous, for the Assad family has been engaged in illicit activities since the ascension of late president Assad to power. Reportedly, President Assad ordered the arrest of his cousin for making contact with his exiled uncle Rifa’t and his sons in Europe.

It is against this background that Rustum Ghazali, former intelligence chief in Lebanon and head of Political Security Directorate, died under controversial circumstances on April 24, 2015. The story most circulated and implicitly confirmed by the regime is that Ghazali had fallen out with General Rafiq Shehadeh, head of the Military Intelligence Directorate, over Iran and Hezbollah’s overarching influence over the regime. Reportedly, Ghazali was severely beaten at Shehadeh’s Directorate. President Assad lent credence to the story by removing Shehadeh from his position. Rumors and conspiracy theories abounded. But the fact remains that a powerful Sunni regime figure has been killed along other major Assad family members for apparently questioning the regime’s policy. More so, the death of Ghazale came in the wake of the defection of another major Sunni figure of the regime, General Manaf Tlas, son of late President Assad’s long-serving defense minister, Mustafa Tlas.

These unfolding setbacks and blows for the regime cannot be discounted as business as usual for the mafia family of the Middle East. They are consequential and certainly lead in the direction that President Bashar has irreversibly thrown his lot with Iran and Hezbollah. And while the regime may well continue to have an Assad face, one could safely argue that the leader of Hezbollah Sayyed Hasan Nasrallah cannot be discounted as the main pillar and driver of the regime. Nasrallah has consistently said he is ready to go to Syria himself to fight, should the need arise. According to the rumor mill in Beirut, Hezbollah is preparing a wide military campaign to rout al-Nusra Front and the Islamic State in Syria’s al-Qalamoun area near the Lebanese border in order to protect both its Lebanese flank and the approaches to the capital.

Paralleling these developments, the Syrian regime has faced serious military setbacks. In late March 2015, Islamist opposition groups led by the al-Nusra Front seized control of the Syrian city of Idlib, a major urban center with a population of around 165,000 people. Idlib is considered to be the second provincial capital to fall into opposition hands after Raqa, now a stronghold of the Islamic State. The al-Nusra-led Islamist alliance called itself Army of Fatah (conquest) in reference to the seventh century Arab conquests that spread Islam across the Middle East. No less significant, this alliance united anew and waged a battle for Jisr al-Shaghour under the name "Battle for Victory.” By taking the geostrategic town, the Islamists have edged closer to the coastal province of Latakia, President Assad's stronghold, and they are now a short distance from villages loyal to the government near the coast.

These major territorial acquisitions reveal that the Islamist groups have strategically cooperated and used sophisticated weaponry to outgun the regime. Given the history of the Syrian conflict, this wouldn’t have been possible without regional help. In fact, the initial impressions of this regional strategy can be traced back to al-Nusra’s February attack in on the American supported Hazm movement in the Western countryside of Aleppo. On the surface, the eventual defeat of Hazm at the hands of al-Nusra was related to severing all American ties to opposition groups as the U.S.-led international coalition began to target the Islamic State and al-Nusra. In hindsight, however, the attack on Hazm was apparently aimed at paving the way for the creation of a Syrian force capable of overtaking both the Islamic State and the Syrian regime. Al-Nusra and the Islamist Jaysh al-Islam constitute the nucleus of this force, which has been nurtured by Saudi Arabia and Turkey.