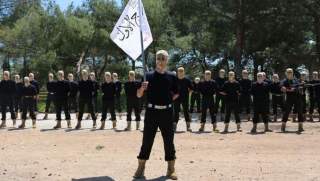 The Syrian regime is weakening militarily in the face of the rise of the Islamic State (ISIS) as well as the Islamist rebel coalition Jaysh al-Fateh that is sponsored by Saudi Arabia, Turkey, and Qatar; in addition, gains have been made by the moderate opposition coalition in the south known as the Southern Front. The regime’s strain means it is no longer able to fight all those groups directly. It has instead begun to indirectly use ISIS to fight them by not standing in the way of ISIS advances in their areas.

This new regime strategy aims at letting ISIS overwhelm the moderate opposition as well as other Islamist groups. Syrian president Bashar al-Assad’s calculation is that if the only actors left on the ground in the conflict are ISIS and the regime, he can then argue that Syria’s choices are either the Islamic State or his regime, and appeal to the international community on that basis. But there is a third way for the future of Syria that can happen if Syria’s only remaining moderate opposition coalition, the Southern Front, is empowered.

The Southern Front is a coalition of Free Syrian Army brigades that renounces extremism and only accepts moderates in its ranks. It has been making significant gains in the southern governorate of Daraa mainly because of its military capacity, supported by the United States and European countries as well as Saudi Arabia and Jordan, as well as its social outreach through working closely with civilian local councils in the area. The combination of military achievement and citizen trust has increased the legitimacy of the Front among Syrians in Daraa.

The Southern Front is crucial in the context of the Syrian conflict not only because of its rejection of extremism and its legitimacy but also because the area that is mostly controlled by it, Daraa, is only 100 kilometers away from Damascus. Whoever takes over Damascus can set the future trajectory of the war, though of course taking over the capital is no mean feat. The regime as well as Jaysh al-Fateh and the Southern Front all have their eyes set on Damascus.

Because of the strategic importance of the south, the regime has tried to stop the advances of the Southern Front in the area, first by fighting it directly then by deploying the National Defense Forces militia and Hezbollah against it. Now that the Syrian army has been reduced to only half of its human capacity, while Hezbollah has incurred thousands in losses in its ranks in its battles in Syria and Iraq, the regime has resorted to facilitating the access of ISIS to the south so that it attacks the Southern Front in the area. In the fall of 2014, there used to be no significant presence for ISIS in the south, and the Southern Front’s battles were mainly with the regime, the NDF, and Hezbollah as well as with Jabhat al-Nusra. Today, most of the Southern Front’s battles are against ISIS, though the Front is also continuing its offenses against regime targets, as seen in its recent takeover of the Syrian Army’s Base 52.

This and other losses by the regime have pushed it to change its strategy on the ground. Until recently, the regime had exercised control through being present in core urban centers across Syrian governorates, even if the rural peripheries in those areas were under opposition control. Now, Assad seems to be giving up many cities and is instead shifting the focus to holding core regime areas, mainly the Sahel (coast) in the west and Damascus. This is allowing ISIS to seek to expand its geographical presence in Syria in the areas abandoned by the regime. The more ISIS is strengthened, the more of a threat it poses to the Southern Front.

The Southern Front is also challenged by the rise of Jaysh al-Fateh. Saudi Arabia’s motivation behind the creation of Jaysh al-Fateh is not to empower Islamist groups because they are the preferred actors for Saudi Arabia (they are not), but to be pragmatic: Saudi Arabia has lost patience with the United States in seeking an end to the Syrian crisis, and is concerned about Iran’s embrace by the international community following the birth of a nuclear deal as well as about Riyadh’s own declining influence in the Middle East. Those concerns have spurred it to seek to put as much pressure on the Syrian regime as possible using the tools available on the ground so that Riyadh can set the trajectory of the transition in Syria and bolster its own regional influence.

It is therefore supporting the Southern Front because it is the only potentially viable actor against the regime in the south, but Riyadh and its allies are also creating a branch of Jaysh al-Fateh in the area as a way to work with the Islamist groups there, while they are supporting Jaysh al-Fateh in the north also because they consider its members to be the only viable actors there. Because of the membership of Jabhat al-Nusra—Al Qaeda's Syrian franchise—in Jaysh al-Fateh, Qatar has been attempting to rehabilitate it to try to push it away from its affiliation with al-Qaeda, as a rehabilitated Nusra would be a way to guarantee Qatari influence in post-Assad Syria. This poses a challenge to the Southern Front because Jabhat al-Nusra itself has political ambitions too and is eager to play a role in Syria’s transition. Although it is officially part of the Al Qaeda franchise, it is pragmatic in its operations on the ground. For example, it is not imposing its ideology on Syrians in areas under its control out of recognition that this would make it unpopular. Its leader Abu Mohammed al-Golani’s appearance on Al-Jazeera in June 2015 articulated a keenness to reassure the West that Jabhat al-Nusra’s ambitions are purely related to Syria and not the West.

If Jaysh al-Fateh continues to grow without the Southern Front’s being able to outdo this growth, the former will potentially become the most influential military actor on the ground in Syria, which paves the way for its members to later play a political role in Syria’s transition. Although Islamist groups that renounce extremism should be represented in the post-Assad Syrian transitional government, because they do have a significant following in Syria, having them lead this government would marginalize the moderates.

The Southern Front has already begun to prepare itself to play a political role through establishing a political wing, appointing a command council, creating ethical guidelines for its members, and increasing its engagement with civil society and local councils. If the Southern Front is empowered, it can then contain members of Jabhat al-Nusra and other Islamist groups. This containment is possible because many members of those groups have joined them not out of ideological conviction but out of fear, economic need, the desire to join groups that have delivered concrete results against the regime, or the desire for order and stability. So if Jaysh al-Fateh plays a leading role, they will follow its trajectory. Yet if they see a viable alternative, which is the role that a government led by the political wing of the Southern Front can play, those members are likely to be detached away from Islamist groups. In the interim, if the Southern Front can outdo the financial benefits offered by Islamist groups to their members, those members are likely to shift their allegiance to the Southern Front.

A transitional Syrian government should have wide representation from across the Syrian political spectrum, including the Syrian opposition in the diaspora as well as members from the current regime who accept the compromise. This wide representation would enable it to work to unify the Syrian army, and then seek the support of the international community to fight ISIS. In order to get to this scenario, the Southern Front today needs not only more military and financial support from its patrons but also to strengthen its governance ability so as to increase its local buy-in and form a “development zone” similar to the model developed by the United Kingdom in Afghanistan, which served to showcase the benefits of life under non-extremist rule.

That is why the current “train and equip” program supported by the United States and the United Kingdom is not enough; what the Southern Front needs in addition to more technical, financial, and military support is to increase its governance and political capacities. Without them, Syria will be at risk of losing its last hope for a moderate-led transition.

Lina Khatib is director of the Carnegie Middle East Center in Beirut. Previously, she was the co-founding head of the Program on Arab Reform and Democracy at Stanford University’s Center on Democracy, Development, and the Rule of Law. Her research interests include the international relations of the Middle East, Islamist groups, political transitions, and foreign policy. She has also published widely on public diplomacy, political communication, and political participation in the Middle East.