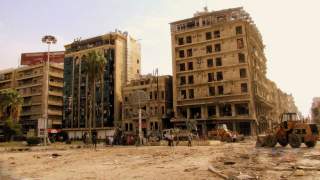 While much has been said about the dangers of Sunni foreign fighters returning home, the return home of the far more numerous Afghan and Pakistani Shia foreign fighters has received noticeably less attention. A major reason for the disparity is that most accounts of the Afghan and Pakistani troops fighting under the Hezbollah flag in Syria mistakenly tend to minimize their ideological motivations. However, the Shia foreign fighter phenomenon could have serious ramifications for South Asia, because it serves as a pretense under which Tehran trains and indoctrinates militant Shia populations.

The liwa’ fatimiyun (Fatimiyun Brigade) is composed exclusively of Afghans and fights under the auspices of Hezbollah Afghanistan. According to an Iranian news source, the number of Afghans fighting for the Assad regime is between 10,000 and 20,000, while other news sources put the number of Afghans at between 10,000 and 12,000. There is no doubt that Afghans have paid a heavy price in the fighting, as 700 Afghans are thought to have been killed in action around Aleppo and Deraa alone. Many of those tracking the number of funerals for Afghans fighting in Syria came up with numbers closer to the regime’s official narrative of 100 dead, because the bodies of Afghan fighters are often not recoverable and simply left to rot if they lie in rebel-held territory.

Though the number of Pakistanis fighting in Syria under the Hezbollah flag is impossible to gauge accurately, one thing is clear: it is rising. The Pakistanis were originally integrated with other units and now serve in their own distinct unit known as liwa’ zaynabiyun (Zaynabiyun Brigade). Thus far, there have been at least twenty funerals for Pakistani fighters in Syria, but there are no real estimates regarding Pakistani fatalities in Syria, and the actual number of those killed in action could be much greater the number of funerals documented.

When compared with other groups, the Shia foreign fighters have an unquestionable numerical significance. Whether taking the larger or smaller estimates, the Shia contingents from Afghanistan and Pakistan are significantly larger than the group of 4,700 Westerners fighting for ISIS.

It is widely accepted that compensation, not ideology, brings the Shia fighters to Syria. This perception is based on anecdotal evidence, as well as the idea that Afghans’ lot in Iran and Afghanistan is a tough one and the soldiers in this conflict receive relatively high salaries. Iran targets these vulnerable young men, unable to obtain work permits or establish legal residency in Iran, and incentivizes them with various forms of compensation to fight in Syria. If they refuse, they are sometimes threatened with deportation.

One regional expert quoted in The National noted: “Some are coerced to fight, others promised residency papers for their family, and a small salary. It demonstrates Iran’s exploitation of Afghan Shiite refugees.” Yet that same article described an individual who joined the fight to protect the Shia pilgrimage site of Sayyida Zaynab, quoting the recruit as saying “the Islamic State is a common enemy of Iran and Afghanistan… this is a holy war,” before going on to conclude that the foreign fighters were “mercenaries.” Similarly, The Wall Street Journal’s report on Afghans fighting in Syria in 2014 looked mostly at the material benefits provided to Afghan fighters in Syria. Though the article did briefly mention the sectarian rhetoric Iranians used to appeal to and recruit Afghans, it quickly moved on to quoting Professor Nader Hashemi as saying that Iran is “purchasing mercenaries to do the fighting for them.” These articles demonstrate both that otherworldly concerns are important factors in motivating Shia groups to fight in Syria and that experts seem to be glossing over that fact.

In contrast, the fixation on ISIS’ ideological appeal rather than the financial incentives of fighting with the jihadist group indicates a clear inconsistency. ISIS offers Syrians a salary that is at least four times what other rebel militias can pay in war-torn Syria, yet few people refer to its fighters as mercenaries.

The alliance between the Assad regime and Shia foreign fighters is built upon a convergence of Alawite political interests and Shia religious convictions in defeating Sunni rebel groups. As one Alawite Syria expert explained, the Assads have so hollowed out the religious elements of Alawite identity that the group’s defining characteristic has become ruling Syria, and its mobilization behind the regime is largely to defend its own privilege. Meanwhile, the Shia foreign fighters’ support for the Assad regime is based on a religious mandate to fight radical Sunni rebel groups that threaten Shia holy sites.

The threat to Shia shrines and mosques originates in one of the major doctrinal flashpoints between salafi-jihadi Sunnis and Shia Muslims: the controversy regarding the Muslim principle of tawhid, the unity of God. While Shia Muslims believe that Muhammad’s family and their descendants (including the twelve Imams) had an elevated status and that it is permissible to pray at their graves, radical Sunnis believe this to be shirk, or a heresy of associating or equating others with God. Therefore, the salafi-jihadis see the Shia and their places of worship as justified targets of jihad and the obligation to “enjoin right and forbid wrong.”

In the past, Shia communities beyond the Arab Middle East have mobilized in response to threats to pilgrimage sites in the Arab world. For example, The International Business Times reported that 30,000 Indian Shia had filled out visa request forms to fight in Iraq and defend the holy cities of Najaf and Karbala when it looked like ISIS might be approaching. While the Indian government prevented its citizens from going in order to avoid being entangled in the Syrian conflict, this incident points to potential ideological motivations for Shia Muslims fighting in Syria and Iraq. In this context, it is hard to understand why commentators have so boldly written off Shia concerns that groups like ISIS or Jabhat al-Nusra will take Damascus and destroy the pilgrimage site known as the shrine of Sayyida Zaynab, where Muhammad’s granddaughter is buried.

One could argue that since most of these recruits are from refugee camps in Iran, they will not serve Iranian interests in South Asia and many will simply return to Iran. After all, aren’t some even fighting in Syria because of Iran’s promises that upon return their families will be granted residency permits?

However, this argument is laid to rest by thorough scrutiny of Iranian recruitment tactics. Although it is scarcely mentioned in media reports on this issue, the Iranians are conducting recruitment inside Afghanistan and Pakistan. One German journalist chatted with Shia volunteers for Assad in Kabul while Shia leaders in Afghanistan noted that “the recruitment drive is co-ordinated by the Iranian embassy in the Afghan capital. It provides visas to ‘hundreds’ of Shia men each month willing to fight in Syria.” Similarly, residents of Pakistan are recruited to join the fight in Syria through Urdu-language websites. Thus, while some Shia recruits are undoubtedly rallied from the dismal refugee camps in Iran, at least hundreds—if not thousands—have left Afghanistan and Pakistan to fight in Syria under Iranian direction. Presumably, those recruited from Afghanistan and Pakistan will be returning to their home countries after serving in Syria.

Furthermore, the Iranians have already indicated a desire to extend their influence in South Asia through infrastructure projects and establishing branches of Hezbollah in Afghanistan and Pakistan. Iran hopes to ensure its own security and undermine U.S. interests with its meddling in Afghanistan. As the U.S. troop drawdown continues, training and indoctrinating a strike force similar to Lebanese Hezbollah in Afghanistan could allow Iran to expand its influence and fill the power vacuum in the midst of a deteriorating security situation.

Iran also has motive for fueling sectarian-based activity in Pakistan. Much like Syria and Yemen, Pakistan is a fault-line for the Saudi-Iranian competition for hegemony in the Muslim world and it is entirely plausible that this rivalry could bleed into Pakistan once more, recreating the dramatic escalation of sectarian violence the country experienced in the late 1980s. Therefore, Iran’s interests would be well served by the cultivation of a readily deployable proxy group under the control of the IRGC and based in Pakistan.

As the number of Shia foreign fighters in Syria from Afghanistan and Pakistan continues to rise, the potential ramifications for the Muslim world become even more severe. When these battle-hardened foreign fighters return home after being trained and indoctrinated by Iran and having built a network of likeminded people, it is no stretch to believe that they could serve as transnational networks to advance longstanding Iranian ambitions in South Asia.