Syria's Peace Talks Would Be Nowhere without the Iran Nuclear Deal 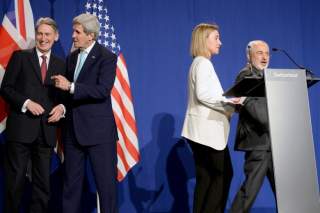 Critics of the July 14 nuclear deal with Iran railed against it on the grounds that it would embolden what they argue is Tehran’s destabilizing behavior in the Middle East. The reasoning goes like this: lifting sanctions gives Iran access to tens of billions of dollars that will flow to fund disruptive activities and lets Iran freely pursue its regional ambitions without fear of reprisals.

The cynics had a point. On the heels of the nuclear deal, Russia’s stepped-up military involvement in Syria came hand-in-hand with Iran’s redoubling of its armed support for the blood-soaked Assad regime. But to the surprise of many, Russia simultaneously opened up a parallel diplomatic track that now includes the United States, Turkey, Saudi Arabia, Britain, Egypt, Germany, France, Turkey, Qatar and the United Arab Emirates. Unlike previous diplomatic rounds on the fate of Syria, this time Iran was also invited. The participation of the Iranians—a pivotal player in the Syrian civil war—would not have been possible without the successful conclusion of the nuclear deal. And if, in fact, there is an eventual political settlement in Syria, it will have been made possible in no small part by the nuclear deal.

While critics of the deal in Tehran and Washington cringe at any public acknowledgement of this fact, the connection between the two diplomatic initiatives is undeniably strong. This doesn’t mean that the Iran nuclear deal will prove to be a panacea for Syria and the region’s other problems, and predicting such would be naïve. But it would be equally irresponsible to overlook how this historic deal just might be the catalyst that has enabled the current negotiations on Syria.

So how does concluding the nuclear deal feed into the current Syrian negotiations? First, the P5+1 arrangement serves as a model through which international coordination and cooperation can take place on working towards resolving the Syrian conflict. This coming together of the major world powers on behalf of the Iranian nuclear deal reinforced the reality that as the Middle East has morphed into a region of turmoil, the dynamic is no longer a zero-sum game, as there can be no winners in an environment of complete chaos and destruction. Yes, the Russian military ramp-up in Syria smacked of a Cold War–era conflict, and on its face was a repudiation of the spirit of cooperation that prevailed during the P5+1 negotiations with Iran. But Russia’s ease in opening up a parallel diplomatic track, and the positive response it received from the U.S. and Europeans as well as the Arabs and Iranians, would have been unlikely without the precedent set by the P5+1 model developed for the nuclear negotiations.

And while Russia’s foray into Syria is a challenge to the U.S. role in the region, it is a competition that is bounded by some common interests. Where at one level the U.S. and Russia are adversaries, at a higher level they share the interests of defeating the forces of regional disorder like ISIS, and resurrecting the Syrian state to the degree that is even possible. In other words, the U.S. differs with the Russians on what a government in Damascus would look like, but at a higher level, the logic of a P5+1 deal still prevails. That logic is that the “great game” is over in the Middle East, lest it lead to further destabilization that could engulf the U.S., Russia and Europe.

Moreover, both Russia and the U.S. seem to have internalized the notion that in a region adrift, alliances may no longer be as hardwired as they were during the Cold War, but instead consist of shifting coalitions. In the new reality of the Middle East which is implicit in a P5+1-type arrangement, U.S. opposition to Russia’s military involvement in Syria doesn’t necessarily preclude the two countries from working together to forge a diplomatic track. And while less likely, this same logic could extend to regional actors. It is possible that while Iran and Saudi Arabia are likely to cross swords on most regional issues, they could cooperate, albeit reluctantly, under the political cover provided by the Russian-instigated international diplomatic track.

Second, the nuclear deal and Russia’s sudden boldness in Syria are causing Iranians to do some soul-searching of their own. What does the regime want the nuclear deal to mean for Iran’s regional agenda and policies? To say there is no agreement on this point in Tehran is a colossal understatement. At the political level, the nuclear deal negotiated by the foreign ministry with the support of President Hassan Rouhani fell under the watchful eye of the Supreme Leader, Ayatollah Ali Khamenei. Khamenei ultimately gave his conditional approval, but the deal continues to be viewed skeptically by the hard-line factions in the country, like the Islamic Revolution Guards Corps (IRGC). And it is, incidentally, these very hard-line forces that are driving Iran’s political-military involvement in Syria. To put it mildly, the government of President Rouhani is far more open to compromise over Syria than are his domestic rivals in the hard-line camp.

And yet it is unlikely that we will see Iran’s moderate and hard-line factions battle it out on the Syrian question. As much as the hardliners dislike Foreign Minister Javad Zarif and resent the fact that he represents Iran at the Syria talks in Vienna, they are short on alternatives. They too are caught in the post–nuclear deal whirlwind and have no choice but to stay on board with Russia’s diplomatic initiative for Syria. Going it alone in Syria—particularly now, with the Russian air force providing critical support in the military arena against the anti-Assad rebels—is not a good option for the IRGC, and they recognize this hard reality.

They will therefore likely let Zarif and the Russians alone for now to pursue the diplomatic track. That said, beyond the Syria file, the IRGC generals that drive much of Tehran’s regional agenda might not feel the same constraints in places such as Iraq or Yemen, or on how to proceed in Iran’s otherwise highly hostile relations with Saudi Arabia. If they see Russia as an invaluable partner in Syria, and are henceforth open to engage in a broader political process of give-and-take, the same IRGC generals might feel differently on other regional hotspots where Iran’s hand might be stronger. It is therefore premature to assume that the nuclear deal has yielded a new Iranian regional outlook. That might become the case if President Rouhani and his foreign minister Zarif gain the upper hand as they did with the nuclear negotiations. But it is still too early to tell.

It isn’t clear at all yet what the current diplomatic track on Syria will yield. It could lead to new rounds of negotiations, renewed fighting on the ground, or a combination of the two. But what is clear is that the Iranian nuclear deal and the P5+1 mechanism that enabled it have shaped in no small way the diplomatic context for the Syrian conflict. Stay tuned: we will see in the coming weeks whether this is a positive or negative legacy, and whether it will extend out to the region’s other seemingly intractable problems.

Ross Harrison is on the faculty of the School of Foreign Service at Georgetown University and is a nonresident scholar at The Middle East Institute in Washington, D.C. Ross is also on the faculty of the political science department at the University of Pittsburgh, where he teaches courses in Middle Eastern politics. Harrison authored Strategic Thinking in 3D: A Guide for National Security, Foreign Policy and Business Professionals (Potomac Books, 2013)