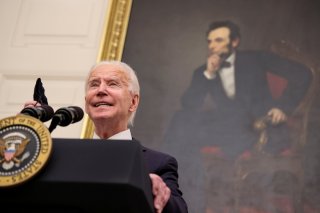 With this week’s inauguration of President Joe Biden, most Americans breathed a sigh of relief. Facing the most severe stress test American democracy has seen in over a century and a half, we passed.

While pictures of the mob storming the Capitol are the most vivid face of the challenge, the graver offense was the serious effort President Trump and his team made to disrupt the established constitutional process for transferring power from an incumbent to a challenger who defeated him in an election. Like the stress test our financial system faced when lax regulation and irresponsible risk-taking by many of the nation’s major financial institutions caused a Great Recession in 2008, the system certainly bent—and even wobbled. But confronting extreme risks, in both cases, extraordinary actions by extraordinary individuals saved the day.

As we give thanks for having escaped a real possibility that could have fundamentally undermined the character of American democracy, it is not too soon to begin a discussion of the factors and actors who made the decisive difference between success and failure in this case. Debate about that should inform new legislation to prevent a repeat.

First, in my assessment come the founding fathers. In their wisdom, they wrote a constitution and created institutions for a system of governance strikingly different from the British monarchy against which they had revolted, or autocracies that governed citizens through most of history. Instead, they created what the great American presidential scholar Richard Neustadt called not just a government of separated powers, but of “separated institutions sharing power.” While they made the president the most powerful individual in the country and the commander in chief, Congress and the courts each have their own share of powers in every realm, including elections to transfer power. Equally, if not, more importantly, each has its own power base—independent of the president. With the press as a virtual fourth estate and other institutions of civil society having licenses as well to think and act beyond the government’s commands, American democracy is often messy. But as Justice Brandeis observed famously about the American constitution, it divided power “not to promote efficiency but to preclude the exercise of arbitrary authority.” As the recent challenge reminds us, this was a price worth paying.

Second, however, this government and its institutions are not a machine that functions mechanically or is self-executing in governing of, for, and by the people. It consists of several million public servants, many of whose choices and actions under duress were decisive in sustaining American democracy in the recent test. These include elected officials, from senators and congressmen to governors and members of state legislatures, secretaries of state who are responsible for organizing elections, civil servants in many departments including those who organized elections in each state and counted the ballots, and those in the military and police.

On the basis of what we know now, it is clear that President Trump and his team made a serious attempt to disrupt the established, legal, constitutional process for determining the outcome of an election. Had they succeeded in persuading enough legislators in Pennsylvania, Georgia, and Nevada or Arizona to parrot their allegations about electoral fraud and thus call into question the outcome of the vote in their state, Biden could have been denied enough electors to be declared the victor in the Electoral College. Had Trump’s efforts to coerce individuals responsible for conducting a fair and free election—for example, Brad Raffensperger in the state of Georgia whom he tried to bully to “find 11,780 votes” at the last hour—succeeded, this could have triggered officials in other key states like Pennsylvania and Nevada or Arizona to, as Trump urged, “recalculate.” Had the president’s attempt to force the Republican leader of the Senate Mitch McConnell to openly challenge the certification of votes succeeded, the Congress could not have confirmed a Biden victory. Had Vice President Pence yielded to the president’s attempt to persuade him to go beyond the “ceremonial” function as presiding officer of the January 6 meeting of the members of Congress at which the Electoral College votes from the states are officially counted and the winner declared, the country would have been thrown into a constitutional crisis. And had the Chairman of the Joint Chiefs of Staff and his colleagues been willing to become instruments of the president were he to declare an insurrection, invoke martial law, and postpone the election or the inauguration, it is possible that President Trump might still be occupying the Oval Office.

To appreciate how each of these attempts could have been seriously damaging, it is necessary to recall the strategic paths available to Trump immediately after the election as it became clear that the vote count was against him and unlikely to change. These were previewed in my “Trump’s Stealthy Road to Victory”  here on November 6. The three most plausible scenarios were: sending competing slates of electors to Congress, asserting Vice President Pence’s authority over the Senate, or forcing a vote in the House.

In the first, state legislatures could submit to Congress slates of pro-Trump electors regardless of the popular vote. The normal practice in a state where Biden won the vote total would be for state election officials to certify the results and send a slate of electors to Congress. But the Constitution also grants state legislatures the power to appoint their own electors if they conclude that the popular vote has been corrupted. In that case, swing states with a Republican-controlled legislature (Georgia, Wisconsin, Michigan, and Arizona) could send electors to Congress who would vote for Trump, or any one of these states could send competing electors, setting up a clash between the House and the Senate.

If that occurred, the 12th Amendment to the Constitution specifies that the “President of the Senate shall, in the presence of the Senate and House of Representatives, open all the certificates and the votes shall then be counted.” This means that amid disputes from competing electoral slates, the President of the Senate—Vice President Pence—would appear to have the authority to decide which to accept and which to reject. After Trump’s best efforts to persuade him to do just that, Pence thought hard about the option. But when he reflected prayerfully on the Constitution and subsequent judicial decisions, he concluded that it would be wrong. As he wrote in a letter delivered to members of Congress on January 6 before the Joint Session began, “it is my considered judgment that my oath to support and defend the Constitution constrains me from claiming unilateral authority to determine which electoral votes should be counted and which should not.” Had he chosen a different path, Trump could have been right when on that same day, several hours before the Joint Session, he told thousands of his supporters at the White House: “If Mike Pence does the right thing, we win the election.”

A third torturous, but nonetheless possible path would have opened if the Trump team’s legal challenges claiming widespread voter fraud succeeded in Georgia, Pennsylvania, and Nevada. In that case, neither candidate would have had the required 270 electoral votes. At that point, the 12th Amendment stipulates, “the House of Representatives shall choose immediately, by ballot, the President. But in choosing the President, the votes shall be taken by states, the representation from each state having one vote.” In the current House of Representatives, even though Democratic members outnumber Republicans, the one vote per state rule would mean that Republicans have a majority with 26 of the 50 states. A vote of the states could then have elected President Trump for a second term.

Fortunately, none of these scenarios materialized. But recognition that they could have, and did not but for the courageous choices and actions by so many of our fellow citizens, is cause for thanksgiving. Yet as C. S. Lewis wrote: “if you do one good deed your reward usually is to be set to do another and harder and better one.” While American democracy prevailed in this stress test, its future remains, as Biden said in the inaugural address, “fragile.” The next, and even more difficult stress test of our democracy will be to reunite the country after the traumatic experience of the riot on January 6 and amid the deep divides it revealed. Abraham Lincoln captured a profound truth when he said, “a house divided against itself cannot stand.” Fortuitously, indeed providentially, five decades of public service have prepared Biden for this challenge—and he understands in his bones that it is his first and most important job. As he said on Tuesday, “My whole soul is in this: Bringing America together, uniting our people, uniting our nation.”