Taiwan’s Success Against the Coronavirus Could Spur Greater U.S.-Taiwan Cooperation 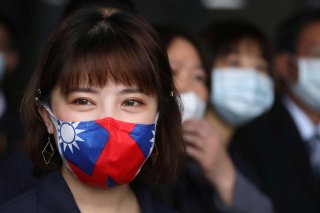 The bipartisan statute passed unanimously by Congress, is intended to strengthen Taiwan’s standing around the globe in response to China’s efforts to restrict international recognition of Taiwan. It is a timely gesture of support for one of America’s most willing and capable allies. More can be done, however.

In recent decades, Taiwan has transformed itself into a beacon of freedom, not only for the Chinese but for people worldwide. For example, it has shown that respect for human rights can be a powerful force for political stability and that free enterprise, free association, and free speech lead to entrepreneurship, prosperity, and security.

The Heritage Foundation’s twenty-sixth edition of the Index of Economic Freedom highlights Taiwan’s high degree of openness and competitiveness, ranking the dynamic democracy the eleventh-freest economy in the world. And in its latest edition of Freedom in the World, an annual report that assesses political rights and civil liberties around the globe, Freedom House classifies Taiwan as a “free” nation.

The TAIPEI Act, although introduced in Congress last year, is especially relevant in the context of the current global health crisis. Taiwan has had remarkable success in dealing with the coronavirus, with fewer than three-hundred confirmed cases and just two deaths as of March 28.

Taiwan’s record is even more noteworthy given its proximity to China and its exclusion from the World Health Organization (WHO), which has lately been excluding Taiwan to please the communist government in China. When Taiwan wrote to the WHO in late December asking whether there was human-to-human transmission in the virus outbreak in Wuhan, the WHO did not even reply. As a recent Wall Street Journal editorial noted:

From 2009 to 2016, the World Health Organization allowed Taiwan to attend its annual policy meetings as a nonvoting observer and sometimes let its representatives participate in technical meetings. But at Beijing’s behest, the WHO has given Taiwan the pariah treatment since Tsai Ing-wen was elected president in 2016….The WHO has held two emergency meetings since the coronavirus outbreak. Taiwan wasn’t permitted to attend…China’s bullying ought to be intolerable amid the coronavirus outbreak. As the single largest contributor to the WHO, the United States should make that clear to Beijing.

The TAIPEI Act is one way of conveying that message.

Taiwan has compiled an impressive record as a constructive member of the world community, despite efforts by mainland China to isolate it, and provides a positive example of a pathway to development and prosperity based on high degrees of both political and economic freedom.

In January, Taiwan’s President Tsai Ing-wen overwhelmingly won re-election with almost ¾ of eligible voters casting ballots. In his remarks at a recent Heritage Foundation event on Taiwan, Stanley Kao, Taiwan’s top representative in the United States, reminded us that the presidential election demonstrated that democracy works—and works well—in Taiwan because “[the people of Taiwan] don’t take it for granted.” In that regard, Taiwan is a model for Asia and beyond.

Taiwan’s free-market economic development is equally important. Steady economic growth in recent years has made the country one of the richest in Asia, and Taiwan is America’s twelfth largest trade partner, with two-way trade totaling almost $100 billion.

In many profound and enduring ways, Taiwan and the United States have become strong allies sharing powerful commitments to the values of democracy, the rule of law, and free markets. The relationship today is a fruitful partnership that is more constructive and forward-looking than ever.

More can be accomplished, however. The TAIPEI Act shows the goodwill that is present, and the Taiwan Relations Act, which celebrated its fortieth-anniversary last year, provides some strategic focus and clarity. What’s still missing is a bilateral U.S.–Taiwan trade and investment agreement, something long advocated by The Heritage Foundation.

That would be a worthy next step.

Anthony B. Kim is the editor of the Index of Economic Freedom and Research Manager in the Center for International Trade and Economics (CITE) at The Heritage Foundation (heritage.org). Terry Miller is the director of CITE and Mark A. Kolokotrones Fellow in Economic Freedom.