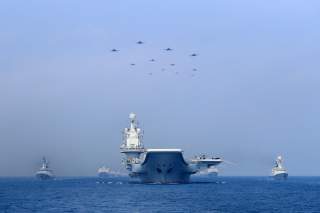 China on Monday accused the United States of “playing psychological games” and “harming peace and stability” after two U.S. Navy warships transited the Taiwan Strait over the weekend, the first such passage since July 2017.

The Japan-based USS Mustin and USS Benfold Arleigh Burke-class destroyers made the transit in international waters late on Saturday evening as part of routine freedom of navigation passages. U.S. Pacific Fleet spokesman Capt. Charlie Brown said that “U.S. Navy ships transit between the South China Sea and East China Sea via the Taiwan Strait and have done so for many years.”

Beijing’s response, as expected, was to decry the transits—notwithstanding their routine nature and the fact that in the past Chinese authorities had remained silent when they occurred—as “provocative.” On Sunday, Taiwan Affairs Office director Liu Jieyi accused Washington of “playing the Taiwan card,” while over at the foreign ministry, spokesperson Hua Chunying stated that “the Taiwan issue is related to Chinese sovereignty and territorial integrity” and “urged” the United States “to at once scrupulously abide by the one-China principle . . . and avoid harming China-U.S. relations and peace and stability in the Taiwan Strait.” (Note: the United States abides by its “one China” policy, which merely acknowledges Beijing’s contention that there is only one China, as well as the Taiwan Relations Act of 1979, the Three Communiqués and Six Assurances. The United States is under no obligation whatsoever to abide by Beijing’s “one China” principle. Saturday’s passage in no way contravened any of those policies.)

The reason for Beijing’s ire, of course, is that it is now clearly on a mission to rewrite longstanding rules of engagement in the Asia-Pacific region and to alter the status quo in the Taiwan Strait. Therefore, what was “acceptable” in the past is now treated as an attack on Chinese sovereignty and interference in its near-abroad, which besides waters within the first island chain also includes the East China Sea and practically all of the South China Sea. Beijing’s aim is nothing less than to expel the United States from the region through denial of access and the erosion of its security agreements with countries like Taiwan, Japan and the Philippines.

Beijing has invariably stated that Taipei and Washington have been undermining stability by tightening their relationship, and refuses to admit that this rapprochement is directly related to growing military activity by the People’s Liberation Army (PLA) near and around Taiwan, as well as in the East and South China Sea. The deepening of the U.S.-Taiwan relationship is therefore a consequence of Beijing’s military assertiveness and provides the reassurance, as per the Taiwan Relations Act, that Taiwan needs to hold the line against an encroaching China. The status quo in the Taiwan Strait can only be maintained if action is taken to balance against growing Chinese activity.

The Chinese leadership (as well as the opposition Kuomintang, or KMT, and many international media outlets) has also attributed rising tensions between Taipei and Beijing to the Tsai administration’s refusal to acknowledge the so-called “1992 consensus” and “one China” framework. This decision is largely due to two factors: the “consensus” is a fabrication, and Beijing no longer countenances, if it ever did, “different interpretations” of “one China.” In the past, this had given the KMT the linguistic flexibility it needed to make its case to the Taiwanese public. By doing all this, Beijing has created justification for its actions: its belligerence is merely defensive, in response to provocations by the democratically elected government in Taipei. Critics of the Tsai administration, including the opposition, have suggested that tensions would disappear if only she agreed to the “1992 consensus” and “one China,” as her predecessor, Ma Ying-jeou of the KMT did between 2008 and 2016.

The problem with this logic is that it fails to take Beijing’s true aspirations into consideration. Agreeing to the “consensus” only bought Taiwan time and removed one variable which Beijing could exploit to pressure Taiwan. But for the Chinese Communist Party (CCP), the ultimate aim remains the same: the annexation of Taiwan and the eradication, once and for all, of the Republic of China (Taiwan). In fact, during the alleged period of rapprochement under President Ma, the PLA also encircled Taiwan and occasionally violated its ADIZ, it conducted exercises simulating invasions of Taiwan and deployed new ballistic missiles aimed at its opponent across the Taiwan Strait; and just as now, it expressed anger at any sign of U.S. assistance to Taiwan, from arms sales to the (emergency) landing of a pair of F-18s in Taiwan in April 2015.

The reason we are seeing more PLA activity now is not because President Tsai Ing-wen of the Taiwan-centric Democratic Progressive Party is in office; that uptick in activity is simply the natural progression of a modernized PLA that is flexing its muscles within the region and which seeks to habituate its neighbors to a regular Chinese military presence, all with the objective, finally, of expelling the United States from the region. Thus, it doesn’t matter who holds office in Taipei (or Tokyo or Manila, for that matter): the Chinese are pushing outwards, beyond the first island chain and into the West Pacific. Taiwan is merely a casualty of geography, as it happens to be located smack in the middle of that expansion and between the East and South China Sea. Knowing Beijing’s ambitions, it’s difficult to imagine that the PLA would be any less active near Taiwan, or its activities any less threatening, if the KMT were back in power, as the PLA only has two direct pathways into the West Pacific: the Bashi Channel between Taiwan and the Philippines, and the Strait of Miyako between Taiwan and Japan.

In light of all this, policymakers with a stake in peace and stability in the Asia Pacific should recognize that Taiwan is merely one of several interconnected variables in China’s accelerating effort to assume control of its near-abroad. They should also bear in mind that such ambitions—and related military activity—would not cease if a Beijing-friendly government assumed office in Taiwan. The KMT can vaunt its ability to engage the CCP all it wants, what with visits to Beijing and willingness to embrace the “1992 consensus,” and can use this ostensible advantage for electoral purposes. But in the end, it too stands in the way of Beijing’s greater ambitions. A more pro-Beijing administration could assuage some of the pressure, perhaps, and buy Taiwan some time. But the idea that it could somehow convince Beijing to abandon its region-wide territorial ambitions is a dangerous one, as it would create a false sense of security in Taiwan.

In the end, we’re all in this together. Whether from the “blue” or “green” camp, the people of Taiwan, along with people from other nations in the Asia-Pacific, must learn to deal with a regime in Beijing that is dead set on altering the longstanding security architecture in the region and removing the security umbrella that has been in place since the end of World War II. For Taiwan, it would be to everyone’s advantage if they sought to meet this challenge together rather than perpetuate divisions that enfeeble the nation’s ability to stay afloat.

J. Michael Cole is a Taipei-based senior fellow with the China Policy Institute/Taiwan Studies Program at the University of Nottingham, UK, associate researcher with the French Centre for Research on Contemporary China and chief editor of Taiwan Sentinel. He is a former analyst with the Canadian Security Intelligence Service in Ottawa and has an M.A. in War Studies from the Royal Military College of Canada. His latest book, Convergence or Conflict in the Taiwan Strait, was published by Routledge in 2016.