Taiwan Has More to Worry About Than China's Latest Threat 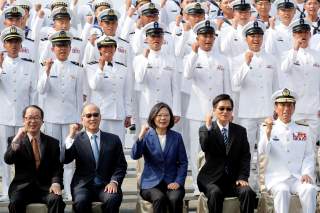 Chinese President Xi Jinping told the Chinese people that Taiwan “must and will return” to the mainland during a speech on Wednesday.

China’s Communist Party has claimed the self-ruled island of 24 million since the end of the civil war in 1949.

Xi increased invasion rhetoric after Taiwan’s 2016 election swept-out the pro-Beijing Chinese Nationalist Party (KMT) from the presidency and legislature, setting a deadline of 2020 for a final decision on whether to storm the beaches or return to the negotiating table.

It is Taiwan’s choice on whether it continues ignoring the “tide of time,” Xi said.

Time is something Taiwan might be short in supply. There are active fears in Taipei’s power elite that the Trump administration will cut a deal on trade issues that will include U.S. assurances not to continue protecting Taiwan’s democracy. This is a common conspiracy fear amongst Taiwan officials, but the recent resignation of Mattis from the Pentagon has not helped.

Even if the United States stopped supporting Taiwan, President Tsai Ing-wen has more to worry about than facing a Chinese firing squad at dawn.

She has already fallen on her sword and resigned as chairperson of the independence-minded Democratic Progressive Party (DPP) after her failed leadership during midterm elections in November. The KMT captured mayoral contests throughout the country, with major gains in traditional DPP strongholds in the south.

Electoral mismanagement showed the depth of Tsai’s failure in face of the growing economic problems in the south. Promoting progressive causes, such as same-sex marriage in a largely conservative Chinese culture and denuclearizing its power supply (costing billions), have too come with challenges. There is no evidence Taiwan’s populace is anti-progressive or homophobic, as Tsai has remained single her entire life.

The shutting down of nuclear power has also been criticized as a security threat, as a reliance on imported coal would place shipments at the mercy of Chinese naval blockades. Going green appears unattainable now, even with nuclear power the south continues to suffer brownouts.

While Tsai and her staff weeps and gnashes their teeth over the elections, the DPP’s electoral disaster gives Beijing hope for a future without Tsai and Company after the 2020 legislative and presidential elections.

The shift in the south could be a strong indicator of the overall mood of the country for the upcoming elections. A return of the presidency to the KMT or third-party candidate would give China an excuse to avoid invading the island and move back to the negotiating table.

During the previous KMT administration, China had a cozy relationship with then-president Ma Ying-jeou. In November 2015, before Tsai took power, Xi and Ma met in Singapore for a historic meeting.

However, the KMT has few presidential contenders for the upcoming elections, even though the party won big in November.

If Tsai loses the reelection for 2020, it might not be from either party, but instead an outsider, the popular and independent Taipei mayor, Ko Wen-je, who has gone so far as making a rap video to humor the electorate and win his second term in November.

Ko has been entangled in numerous scandals, including alleged involvement in organ transplants from China. In Taiwan, the ghoulish practice of preordering organs has been an open secret for twenty years, though the surgery is conducted in China. Computer databases allow for blood group and human leukocyte antigen matching between so-called “donors” and ailing Taiwanese customers.

President Tsai has also not been popular with the military brass. Cutting military pensions and reducing conscription, plus encouraging more wavers for alternative service, have not won Tsai many honest salutes.

Tsai’s decision to forego the purchase of a new advanced jet trainer (AJT) in favor of indigenous development of an unproven platform did not win hearts in the Air Force. Taiwan was expected to procure the M-346 AJT in a co-building contract with Italy’s Leonardo for sixty-six aircraft, but the deal was killed by the Tsai administration in favor of building an AJT from scratch.

Tsai’s policy when entering office was to wean Taiwan off foreign arms procurements in favor of creating a local industry that could later expand into export sales. The philosophy has led to the creation of an indigenous submarine build program, as well as an effort to promote Taiwan-built weapons, including everything from bullets to ships, at defense exhibitions around the world.

Should Tsai be reelected in 2020, the only “green” the President will be seeing is about half a million Chinese troops. Invading Taiwan would be a crowning achievement for Xi’s career, drawing comparisons to Mao Zedong on the Chinese strongmen scale of He-men. A Chinese invasion would be risky, but Xi considers himself a man of destiny.

There would no doubt be movies made about it. Pick your archetype: “Saving Private Chen,” “Black Eagle Down,” “China Sniper.” What the movies will fail to show is the impact of half-a-million “bare sticks” on the island enjoying the fruits of their labor. China’s One-Child Policy has resulted in the creation of 20-30 million lonely soldiers.