Taiwan Must Not Give Tsai Ing-wen Four More Years 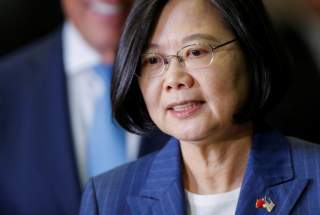 In January 2020, Taiwan will hold elections for its president and legislature. Campaigning for the presidency has long since commenced, and the prosperity of Taiwan's economy and the continuance of democratic freedoms might depend on whether voters will give President Tsai Ing-wen another four years or elect Kuomintang (KMT) candidate Han Kuo-yu.

The electoral campaign has entered a crucial moment; the developments of the farce of the Communist Spy Case became the talk of the town in Taiwan. Its dramatic developments have exceeded the tension of a "farce of espionage," making people associate it with the Bullet Gate Shooting Incident Case of 2004.

The Tsai government is indeed forcefully playing the anti-China card. With the catalysis of the protests and demonstrations over the extradition bill, the Fugitive Offenders Ordinance, in Hong Kong, it has all the more been pandering "a sense of losing one’s country," while commenting here and there on the Hong Kong question. Thus, it is being considered by the other side of the Strait as "external forces" on a par with the United States. Cross-Strait relations will be destined to further deteriorate, and Taiwan's economy and democracy will be in the doldrums as a result.

First, let's scrutinize Taiwan's economic relationship with China. Since the Tsai government came to office, it has restricted cross-Strait investments, coupled with the New Southward Policy, proclaiming to reduce economic reliance on China, but after implementing the policies for close to four years, the effect is zero, as the reliance of Taiwan’s exports on China has inversely increased to 41 percent. As seen from this, Tsai’s plan to use political force for reducing the reliance of Taiwan's economy on China can never succeed. The pragmatic approach is to handle cross-Strait relations properly, never allowing the economy to be impacted by negative cross-Strait ties.

Certain fundamentalist faction members believe the international trade war will devastate China's economy, thus delinking Taiwan’s economy with that of China. However, this kind of thing will not happen because the structure of China’s economy has changed, with exports occupying less than 20 percent of GDP, and exports to the United States occupying 20 percent of the entire export volume, coupled with the fact that large scale economies themselves have greater room for maneuvering. Therefore, although the trade war is impactful, it won’t devastate China’s economy.

Conversely, in the unlikely event that China’s economy really collapsed, it would truly be a disaster for Taiwan’s economy, because Taiwan’s economy is destined to rely on China’s economy. The scales of the cross-Strait economies are 20 to 1; China’s market occupies 40 percent of Taiwan’s exports, while Taiwan enjoys a trade surplus of more than US$80 billion. If a similar trade war should occur across the Strait, there is no doubt whatsoever that the Taiwan economy would immediately be mired in decline, while the effect on China would be minimal.

Secondly, we need to recognize that Taiwan's democracy is worth defending. Today, the existing Communist states in the world are in China, Cuba and North Korea. These Communist states often do not claim to have achieved communism in their countries—rather, they claim to be building toward the establishment of socialism in their countries and utilizing the evil tactics of democracy to realize political objectives. If the Taiwanese people could not see through the Tsai's government despicable political approaches, they would quickly become subjects of existing Communist states, regretting in the end, but too late.

People might doubt that today’s Taiwan, under the rule of the Tsai government, though with rampant political patronage and abuses of power, should still be a democratic society, which after all could be similar to the communist states. In fact, a democratic system relies on the esteem of the participants and self-restraint; otherwise, various kinds of distortions and abuses would erode the democratic spirit, leaving it in an empty shell. The original spirit of Taiwan’s evolving democratic system has long been hollowed out, step by step, by the Tsai government, devoid of democratic culture.

The democratic system relies on the separation of executive, legislative and judicial powers, with checks and balances amongst them, plus the preservative represented by the oversight of the media and public opinion. However, in its three and a half years of governance, Tsai, nevertheless, has blatantly, through the grasp of the Supreme Court, the Grand Justices and the Central Election Commission, firmly controlled “judicial power” in her hand. In addition, through various types of monetary means, the absolute majority of important media outlets have been one-sidedly slanted towards the ruling party, all day long scrutinizing and criticizing the opposition parties in violation of the normal state of democracy, causing the virtual “succumbing” of the media.

Because the Tsai government’s massive electioneering practices through issuing “attractive policies” have befuddled the Taiwanese people’s vision—just like Communist states’ march toward dictatorship—the general public may be bought by these short-sighted policies and elect a president and majority of legislators of Democratic Progressive Party (DPP) affiliation. If this occurs, then Tsai will take a further step to firmly grasp the Executive Yuan and legislative power, meaning the so-called "four powers of democracy" will entirely belong to Tsai. According to the experiences of the past few years, Tsai will substantively terminate Taiwan’s democratic system.

For the electoral campaign, the Tsai government has been publicizing that Taiwan's economy is performing extremely well, but in reality, the situation is absolutely not as the Tsai government has said. This year, Taiwan’s export growth rate is negative, and private sector investments are in the doldrums, with its a little over 2 percent growth rate belonging to the lower bracket growth. In the cross-Strait economic race, Taiwan has lost; in order to sustain growth, it should seek complementarity with China’s economy. To win the election, Tsai is using cross-Strait relations as a sacrificial offering; in fact, it is using the future of Taiwan’s economy as a burial sacrifice.

Since Tsai took complete control of the government, she has thoroughly used her powers to the extreme, concentrating power in the name of democracy. In the forthcoming general elections, she has been exhausting all means to safeguard her political powers. Under the atmospherics of "hating the DPP" permeating society last year, the DPP suffered heavy setbacks; however, facing electoral defeat, she did not stop using anti-China rhetoric, but conversely used it as the strongest medicine, even dispensing the maximum dosage at the crucial moment of the electoral campaign, catalyzing the public’s Sinophobic sentiments in order to help preserve political power.

Over the past several months, national security agencies have repeatedly released news about "China’s interference in elections"; now the time has arrived, verily a veritable human spy has appeared before our eyes, and does so through an international connection format. How fantastic! "Cutting the throat of one’s political foe to the end” has always been the DPP's approach to election campaigning and through these approaches, it has accumulated many successes. However, this time, by tossing out a fraudster communist spy, whether it could harvest the intended shocking and intimidating effect, all depends on whether the public would take the bait.

Taiwan is now situated in a critical moment: Are we going to allow Tsai to further grasp the executive and legislative powers, and then, through various chilling effects, allow the natural duty of oversight on the part of the opposition parties to encounter suppression and withering, creating one-party rule, or should we make Tsai step down, allowing cross-Strait exchanges and reconciliation, thus winning the opportunity for mutual respect and joint development? The voters must not give Tsai four more years.

Kent Wang is a research fellow at the Institute for Taiwan-America Studies. He writes on Asia-Pacific security and strategic affairs with a special focus on the Taiwan issue in the U.S.-Taiwan-China trilateral equations, as well as other topics on East Asian international politics and regional security.