Is Taiwan Ready for an Aggressive China? 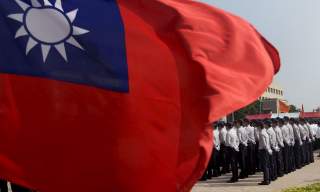 For all the harsh rhetoric coming out of China and growing frequency of exercises by the People’s Liberation Army (PLA), it remains far from convincing that the unification of Taiwan is the top priority for Beijing. But that could change, and when it does, Taiwan had better be prepared to meet that extraordinary challenge. The problem is that, sadly, there are few signs of serious preparation in Taipei for that day.

Things could be far worse. Notwithstanding Beijing’s saber-rattling and the lifting of term limits for President Xi Jinping, Taiwan remains one of a series of issues with which the Chinese Communist Party (CCP) has to grapple. Besides a looming trade war with America and spreading blowback by countries that feel threatened by China, there is every indication that the Chinese economy is headed for trouble. It is rife with contradictions and unsustainable in its present form. Although the economy will not contribute to the collapse of China or of the removal of the CCP from control, it is nevertheless sufficient to make President Xi uncertain as to his grip on power. In fact, Xi is increasingly paranoid about those who might want to unseat him—especially now that constitutional mechanisms for doing so have been dispensed with. The tightening of controls over almost every sector of Chinese society, as well as increased restrictions on the ability of Chinese to interact with their foreign counterparts, tells of a regime that feels insecure. In other words, China’s CCP and Xi is feared rather than loved. Therefore, state stability and regime survival, are the CCP’s top priority and will remain so for the foreseeable future.

Taiwan, therefore, has been lucky, having to contend with a regime in Beijing that is distracted. But, again, that luck could run out.

Despite claims by President Xi and the Taiwan Affairs Office, Beijing’s strategy against Taiwan has consisted of a mixture of efforts involving “sweeteners”—which thus far have failed—and a series of punitive measures. However, rather than discourage the Taiwanese, such coercion appears instead to have emboldened them in their resistance to annexation by its authoritarian neighbor.

Thus far the Taiwanese have weathered the storm because Beijing hasn't put its heart into it and remains incapable of acting on some of its more impressive threats. For instance, China has long maintained the possibility of an amphibious invasion, occupation and subsequent pacification of Taiwan.

Taiwan’s reaction to Chinese threats has been surprisingly pragmatic. Yet, commendable though this may be, Taiwan has also been plagued by a lack of imagination and the assumption that the situation will remain the same in perpetuity. Therefore, Taiwan has been coasting and doing the bare minimum to sustain its existence in the face of half measures by Beijing.

When the CCP has resolved its most pressing issues domestically, or, feeling threatened by those issues it decides it needs an external distraction—the challenged posed by Beijing risks being a much more formidable one, and one for which Taiwan is alarmingly unprepared.

Some areas that warrant much more significant investment if Taiwan is to be able to counter future Chinese threats pertain to domestic laws—antiquated, self-defeating laws that constrain individuals and organizations and that can only ensure the perpetuation of mediocrity. Unfortunately, almost two years into its first term in office, the Tsai administration has yet to tackle those issues. Dealing with those in a not-too-distant future when Beijing has gotten its act together will be too late. If reforms are to have any impact in helping Taiwan bolster its resilience, those need to be addressed as expeditiously as possible.

Ministry of Foreign Affairs (MOFA) rules on personnel and contractors need a complete revamp if state agencies and affiliated bodies are to attract the talent, local and foreign, that is so direly needed to meet the challenges of today and tomorrow. Current regulations condone underperformance while creating a series of obstacles to hiring—and properly compensating—outside contractors. Under existing rules, financial compensation for outside expertise is downright ridiculous. Most will refuse to conduct work under such conditions; those who do work do so out of a sense of duty towards their country. But Taiwan cannot afford to count on charity and goodwill to ensure its survival. Besides those ludicrously rigid rules, institutional resistance to external sources of expertise reflects fears that outside input will expose rampant failure. These shortcomings come in the form of internal “rules” which bar the employment of foreign nationals and has also undermined the ability of state institutions to attract talent.

Salaries and career progression opportunities to attract and retain foreign talent are also severely lacking and continue to trail well behind other economies in the region, including China. In addition to bringing necessary skills and knowledge, attracting and retaining foreign talent would further connect Taiwan with the international community and global institutions, and thereby helping to counter Beijing’s efforts to isolate the island-nation.

In many instances, the foreign talent that was hired by Taiwanese institutions will, after a few years, be abandoned. And with precious few other job prospects, those individuals, many of them embittered by their experiences, will either stagnate in Taiwan or go abroad where the opportunities are. Taiwan often burns those who are most disposed to helping Taiwan by cutting short their contracts or treating them like tools which can be dispensed with after a few years. Doing this is hardly the best way to make friends within the international community. Furthermore, word gets out and gives Taiwan a bad reputation. This acts as a disincentive for highly skilled individuals even considering Taiwan as a destination for work. Short-termism plagues Taiwan and is a dangerous blind spot, especially when China approaches its goals with a long-term perspective.

Additionally, universities, think tanks, state-run institutions, and foundations continue to offer meager salaries and employment packages. Some employees use creativity and hard work to bring to Taiwan experts in their fields who can make substantial contributions in Taiwan, in fields such as energy security, legal reform, economic strategy, global communication, national security. Yet these employees are often reprimanded by the very institutions they work for and the said experts they invited are then ignored by their Taiwanese counterparts. In fact, Taiwanese educated abroad who returned to Taiwan to help build their country continue to face discrimination and often cannot find employment, forcing them to emigrate and to bring their skills along with them.

There is no need for China's "31 incentives," unveiled by the Taiwan Affairs Office in February this year, to spark a "brain drain." That drain is happening now, without Beijing's help, in the form of Taiwanese academics, film-makers, scientists, child psychologists, and others. All of these experts, after years of frustrated efforts in Taiwan, eventually look elsewhere for an environment in which to pursue their dreams and raise their families. As in government institutions, protectionism helps cover for inefficiency and mediocrity. Opening up those sectors—universities, think tanks and so on—to foreign competition by making salaries and packages competitive internationally would not only help attract and retain much-needed talent but would also act as an incentive for Taiwanese employees to improve their game. It's hard to see how all of this could not benefit Taiwan.

Although President Tsai has often talked about new programs aimed at attracting foreign professionals, so far those initiatives appear to have focused almost entirely on individuals with technical skills. Unfortunately, little effort made to attract and retain the public intellectuals who can play a significant role in helping connect Taiwan with the international community.

The waste of finite government resources continues and is as endemic under a DPP administration as it was under the KMT. Agencies and bodies often are pressured by senior officials in government into giving large sums of money to individuals who, though well connected, are seeking grants for projects that simply are of no benefit to Taiwan. Former officials, and sometimes spouses of former officials, will not hesitate to do whatever it takes to get these grants. This includes coercion, threats, and blackmail to secure money from institutions that, ordered by senior government officials, have no choice but to make the funds available. Consequently, projects that stand to have an impact on Taiwan's future, or NGOs that struggle for money, remain underfunded and unable to perform to the best of their abilities. If only the Taiwanese public knew how much money is wasted just to appease large egos and grease political networks. If only they knew how frustrating it is to dedicated officials who are committed to making a difference see their precious, finite funds slip through their fingers because politicians continue to play games behind the scenes.

This is a cry from the heart, not to cheaply criticize Taiwan, which remains one of the best places on earth to live in, but instead because I care deeply about Taiwan, and I want it to do well. Over the years I have endeavored to remain positive about the prospects of this young democracy and to counter the pessimism that often characterizes discussions over its future. At the same time, I also realize that Taiwan has been lucky that Beijing has not focused on resolving the Taiwan "issue" by allocating the resources it could bring to bear if it chose to. (Perhaps Taiwan has benefited from the inefficiencies that, no doubt, also plague the Chinese system, though here again, Taiwan cannot count on those continuing in perpetuity.)