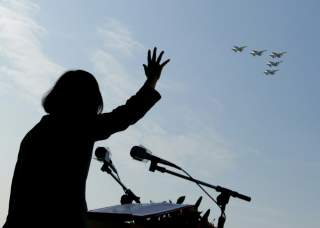 Taiwan has long been a dormant problem for the U.S.-China relationship, successfully shelved by the Three Joint Communiqués of 1972, 1979 and 1982, with the last serious incident being the 1995 Third Taiwan Strait Crisis. Nonetheless, Donald Trump’s actions in the Asia-Pacific region could signal an end to the modus vivendi that has existed for almost fifty years. While President Trump’s decision to accept a congratulatory call from Taiwanese president Tsai Ing-wen did not herald a new understanding of the “One China” policy, as many immediately thought, it is not clear yet what the new administration’s China policy will be. Under Obama, many strategists worried that the balance of power in the Taiwan Strait was moving in China’s favor, as arms deals to the island were delayed and China grew in strength. Trump’s administration appears to be seeking to redress this issue. A new arms package to Taiwan is on the drawing board and among the names being considered for undersecretary of state for policy is Randy Schriver. An Asia expert, Schriver served in the State Department as an aide to Richard Armitage and is currently the president of the Project 2049 Institute, an Asian security think tank based in Washington. Schriver would be a strong pick for any president intent on bolstering its ties with Taipei. However, critics are already pointing out holes in the president’s plan to strengthen relations. There are recent reports that Trump is actually continuing to perpetuate the United States’ lackluster support for Taiwan as the new deal has stalled, seemingly in an effort to appease China.

Beijing’s enduring hostility towards Taiwan has meant that Washington and Taipei have mutual-defense agreements to safeguard its “independence.” In 1979, the United States switched its diplomatic recognition from Taipei to Beijing as the legal representatives of China and acknowledged Taiwan as a part of One China. However, that same year Congress passed the Taiwan Relations Act, which had the aim of enabling “Taiwan to maintain a sufficient self-defense capability,” and the United States is mandated to provide that capability. Both Republican and Democrat presidents have been committed to the relationship and provided Taiwan with a variety of advanced military assets. For instance, in 1992, H. W. Bush sold Taiwan 150 F-16 jets at $6 billion, and the Clinton administration supplied missiles and radar systems to greatly improve Taiwan’s air-defense capabilities.

China always objected to the sale but was never in a position to offer any real opposition until recently. As a result of growing Chinese economic and military strength, U.S. deals have become smaller and met with stiffer backlash. In 2005, Beijing passed the Anti-Secession Law which formalized into policy China’s long-standing rule to use “non-peaceful means” to ensure its territorial integrity should the Taiwanese government declare independence. Signaling that Beijing was no longer afraid to voice its intentions openly and become more assertive in reducing U.S. influence with Taiwan. In 2010, Beijing did not only condemn a $6 billion package, but also sanctioned some participating U.S. companies. It would take until 2015 before Obama authorized another package and it would be a markedly smaller at $1.83 billion. Announced with little fanfare, it still attracted Beijing’s ire. Upon hearing of the deal, the Chinese vice foreign minister said the move “severely damaged China’s sovereignty and security interests.” A year later Obama would even block a smaller $1 billion sale, an obstruction that was reported by the Washington Free Beacon to have considerably damaged Taiwan’s defensive capabilities as it contained spare fighter-jet parts and additional missiles. The move coincided with Trump’s phone call with Tsai, giving the impression that the Obama administration prioritized good relations with China over U.S. obligations of the Taiwan Act.

Trump’s China rhetoric has signaled a significant break with Obama’s Asia-Pacific strategy. A new arms deal on the table could be one such indication that Trump has no intention of going soft on China, as some critics allege. According to sources, the administration may be considering providing to Taiwan rocket systems and anti-ship missiles, with companies such a Lockheed Martin being linked to the deal. Lockheed is the manufacturer of the THAAD missiles system currently being deployed to South Korea, this raises the possibility that the system could also be sold to Taiwan. Even discussions of THAAD could prove troublesome as Beijing has already raised considerable objections to the missiles system in South Korea, even going so far as to apply economic pressure on South Korean companies.

If the rumor mill is to be believed, then Secretary of Defense Jim Mattis is considering Randy Schriver, a prominent Taiwanese supporter, to fill the position of undersecretary of defense for policy. With a strong network among U.S. allies in the Asia Pacific, Schriver would be a reassuring figure for America’s friends in the region. He is also closely linked to Richard Armitage, having worked as his chief of staff and senior policy advisor when Armitage was deputy secretary of state. Schriver is known to be a vocal proponent of strong U.S. engagement with Taiwan and maintains a tough stance against Chinese expansionism. In a piece he co-authored in The National Interest, after the infamous Trump-Taiwan phone call, Schriver wrote that “higher-level engagement with Taiwan serves U.S. national interests and values,” arguing that the phone call was, in fact, “a good first step” towards rebalancing the trilateral China-Taiwan-U.S. relationship.

Schriver himself has called for the United States to provide submarine technology and vertical, short takeoff and landing fighter jets. If rumors about the new arms package are true, then Schriver could be well placed to carry this particular agreement through, as he is already familiar with the weapon systems and their capabilities. He has long been a proponent of balance as a means of deterrence.

The United States must ensure that deals are no longer deferred and it delivers equipment that fits Taiwan’s defense policy of stopping an invasion force before it reaches the island. Schriver’s appeal for the jets to be supplied to Taiwan could be a bad call. In 2010, Cross-Strait military analyst Mark Stokes told a U.S. congressional commission that “every citizen on Taiwan lives within seven minutes of destruction” and in 2015 Beijing bought from Russia several S-400 Triumf, an antiaircraft missile system. Expected to be fully operational by 2020, the missile launchers, which have a range of 400 kilometers, will allow China to strike aircraft over Taiwan, essentially giving China air supremacy in the territory. The Chinese ballistic-missile buildup was examined in a Taiwanese defense report, which stated that by 2020 China would be in a position to invade the island and successfully repel a U.S. counterattack. With the sheer amount of Chinese missiles pointed at Taiwan, it would be unwise for them to buy large amounts of expensive aircraft, which could be destroyed before getting the chance to take off. It is, however, encouraging that Schriver has also called for the sale of submarine technology to Taipei, something the country has been seeking for some time. Advanced submarine technology alongside the defensive missile systems, alleged to already be part of the arms package, would make a suitable combination for an over-the-horizon defense package. In a way, imitating China’s anti-access/area denial (A2/AD) might be Taiwan’s strongest approach to defense. What’s good enough for the gander should be good enough for the goose.

The administration is struggling at the domestic level. At the moment, while Trump’s foreign-policy focus is concentrated in the Pacific, he has gone over one hundred days and has failed to appoint key Asia policy positions across the U.S. government, hampering strategy and slowing relationship-building in an increasingly heated region. It might well be that the arms package never gets off the table, with figures inside the White House stalling the deal to appease Beijing. On the other hand, for an administration that negotiates across the board, the arms package delay might well be connected to the administration’s Korea strategy. As the situation in the Korean Peninsula is ongoing Trump could be using the prospect of a large Taiwanese arms package as leverage in the crisis. For instance, he could offer to remove items from the package or continue to defer it in exchange for tougher Chinese sanctions on the Hermit Kingdom. After the Syrian strike, Trump has developed U.S. foreign policy with Chinese characteristics, keeping Beijing guessing. China frequently caught America off guard in the past, Trump could be playing the Chinese at their own game.