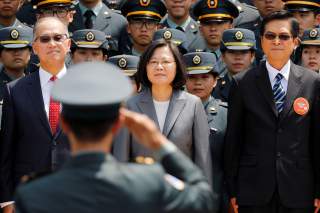 With the U.S.-China relationship descending rapidly into acrimony and indeed frequently characterized as a new Cold War, Taiwan remains a particularly dangerous flashpoint. Although maintaining peace in the Taiwan Strait has never been easy, it has now become even more challenging for several reasons. Taiwan’s economic prosperity and dynamic democracy have endowed it with increased confidence and an increasingly separate identity.  The leadership in Beijing, for its part, has acquired an unprecedented measure of self-assurance, thanks to China’s growing economic and military power. The United States and China have come to view each other as “strategic competitors,” and the Sino-American trade war shows few signs of fading.  To complicate matters, the U.S. Congress, reflecting a broader bid for foreign policy leadership, has inserted itself squarely into the Taiwan issue.

Dueling speeches in January 2019 highlighted the chasm between mainland and Taiwanese positions and the possibility of trouble ahead. Chinese President Xi Jinping, in his first major address on Taiwan, reiterated that “the future of Taiwan lies in the reunification of the country” and that the path to reunification (under a “one country, two systems” arrangement) lies in economic integration and dialogue. While “Chinese will not fight against Chinese,” he warned, Beijing would not foreswear the use of force against the “interference of external forces” or Taiwan separatists.  Both Taiwan’s president, Tsai Ing-wen, and the opposition Kuomintang party (KMT), quickly rejected the “one country, two systems” solution out of hand.

A full-blown Taiwan crisis would present all parties with unpalatable choices and unprecedented risk. But while a crisis would be in none of the actors’ interests, avoiding that outcome will require prudent diplomacy. That will be even truer in the future, as Chinese power continues to grow.  In this essay, we assess the challenges facing U.S. policy toward Taiwan and propose adjustments intended to improve the prospects for peace and stability in the Taiwan Strait.

Beijing has long maintained that only one China exists, that Taiwan forms part of it and that its legitimate government resides in the People’s Republic of China (PRC). China’s leaders have been equally clear that unifying Taiwan with the mainland ranks among their most cherished objectives and that while they prefer to achieve it through peaceful means, they reserve the right to use force if all else fails—and especially if Taiwan were to declare independence. Yet almost seventy years after the proclamation of the People’s Republic of China in 1949, Taiwan continues to be ruled by a government that does not answer to Beijing and that, if anything, is more determined to ensure that things stay that way.

Taiwanese president Tsai Ing-wen has been careful not to declare independence, realizing that doing so could precipitate war with China. Yet no one who has visited Taiwan recently and spoken with its senior officials, as we have, can doubt that Tsai and other top foreign policy and national security officials in Taipei are determined to protect Taiwan’s political system and do not even feign interest in eventual reunification. Indeed, Democratic Progressive Party (DPP) leaders remain wedded to maintaining Taiwan’s distinctive identity and political order, even though they realize that China has vowed never to accept indefinite separation and is more distrustful of the DPP than it ever was of the KMT, which ruled Taiwan from 1945 until 2000 and between 2008 and 2016.

Washington’s “one China policy” acknowledges China’s position that there is only one China, and in 1979 the United States established formal diplomatic relations with Beijing and severed them with Taipei. But, unlike Beijing’s preferred “one China principle,” successive American governments have taken no position on whether Taiwan is a part of China. Moreover, Washington’s policy of “strategic ambiguity” seeks, through specific statements tailored to the circumstances, to discourage unilateral changes to the status quo by either party. For example, George W. Bush sought to rein in Taiwanese president Chen Shui-bian in December 2003 when he stated,

But some American critics have assailed this strategy as too accommodating to China. They insist that the United States must not, for moral and strategic reasons, treat Taiwan as a bargaining chip that can be sacrificed someday in order to placate China, and that the island should be allowed to decide its future, even if that means full-blown independence. For the last two years, pro-Taiwan activists in Congress and elsewhere have seized on the opportunity, especially during times of worsening Sino-American relations, to push for measures that would blur the distinction between diplomatic ties and other forms of relations with Taiwan.

Although Washington should not sacrifice Taiwan to placate Beijing, it must also refrain from using it as a stick for beating China. In recognizing the People’s Republic of China, the United States agreed to eschew statements or actions that signal recognition of Taiwan. The United States must not dictate outcomes to Taiwan, but it should also not have to pay the price—in blood and treasure—if Taiwanese leaders decide to seek de jure independence. Redefining the terms of U.S.-Taiwan relations, especially on the security front, will increase the probability that Taiwanese politicians will do precisely that. If they do, the United States will be dragged into a crisis that could escalate and prove catastrophic. Continued strategic ambiguity, therefore, remains Washington’s best course. Maintaining it will, however, require adjustments that adapt to changing circumstances.

Taiwan’s success in creating a prosperous, vibrantly democratic society has produced a distinctive identity. In addition to nearly seventy years of separate political existence from the People’s Republic of China and the consolidation of democratic rule, the International Monetary Fund ranked Taiwan’s 2018 gdp twenty-second in the world in terms of purchasing parity—extraordinary considering that the Taiwanese account for a mere 0.3 percent of the world’s people and rank fifty-sixth in population size. All of this has made for a Taiwan that has an identity quite separate from China, especially among individuals who are forty or younger. Annual polls by Taipei’s National Chengchi University reveal that whereas only 17.6 percent of the respondents saw themselves as “Taiwanese only” in 1992, the first year the survey was conducted, 55.8 percent did so in 2018. During the same period, those who regarded themselves as solely Chinese fell from 25.5 percent to 3.5 percent.

Furthermore, for nearly two-thirds of those who identified as Taiwanese only, preserving Taiwan’s sovereignty was more important than maintaining economic ties with China, in comparison to 36 percent for those who considered themselves as Chinese as well as Taiwanese. The poll also found that 65.5 percent of respondents under thirty-nine years old supported preserving the status quo in the Taiwan Strait but that 63.4 percent of them also favored fighting a war in the event of a Chinese attack.

Taiwan’s China policy has evolved to reflect these changes in national identity, though not in a linear fashion. President Lee Teng-hui, who led a KMT government, proposed in 1999 that Taiwan and China should engage in “special state-to-state relations,” while his DPP successor, Chen Shui-bian, described cross-Strait relations as involving “one country on each side.” In 2008, KMT leader Ma Ying-jeou backed away from such “two-state” formulations and embraced the so-called “1992 Consensus,” under which both sides accept that there is only one China but agree to disagree on its definition. But since her election as president in 2016, Tsai Ing-wen has pointedly avoided explicitly recognizing the 1992 Consensus even as she has attempted, with only marginal success, to assuage Beijing’s ire over her apparent departure from a “one China” framework.

China, for its part, has vastly more wealth and military muscle than it once did, and thus more options for coercing Taiwan. In inflation-adjusted dollars, China’s economy today is ten times larger than it was in 1992. Its defense expenditure, twice that of Taiwan in 1992, is now roughly eighteen to twenty-three times larger, depending on the methods of calculation used. Although China’s military still suffers from several shortcomings that might make a successful amphibious invasion of Taiwan difficult to pull off in the immediate future, the local balance of power no longer overwhelming and unequivocally favors the United States. The day is fast approaching when China will have a full range of military means to use against Taiwan, making possible large-scale counter-intervention by the United States even more important to the island’s security. In the meantime, Beijing now has many more economic and political levers to pull in order pressure Taiwan.

The United States has long insisted that it would welcome a peaceful reunification on terms acceptable to China and Taiwan; and, from a strategic as well as a moral standpoint, this remains the best position for Washington to adopt. Were China forcibly to reunify Taiwan and the mainland, Washington’s allies in East Asia would conclude that they cannot count on the United States to defend them. And while the United States and its allies might partially compensate for the setbacks that would follow China’s absorption of Taiwan, their relative strategic position would nevertheless suffer. Chinese submarines and aircraft would be in a position to sortie directly into the Philippine Sea and, from there, into the Western Pacific and Japan’s vital sea lanes directly from Taiwanese bases.