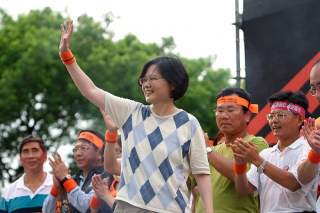 Tsai Ing-wen, leader of the Democratic Progressive Party (DPP) and her party’s candidate for president of Taiwan, will have her work cut out for her when she arrives in the United States at the end of May. She will aim to show voters back home that she can represent Taiwan effectively on the international stage, can advance the island’s interests, and can competently handle Taiwan’s relationship with Washington, Taipei’s most important security partner.

Tsai’s task is particularly tricky as she must convince Washington that, as president, she would not pursue de jure independence, while being careful not to stray too far from her party’s pro-independence leanings. Although Beijing continues to view Taiwan as a “renegade province,” separated from the mainland at the end of the Chinese civil war in 1949, the island is for all intents and purposes an independent state, completely autonomous from the mainland and a representative democracy to boot. Even so, the current Taiwanese administration, headed by the Kuomintang (KMT), retains the view that there is only “one China," which includes the island of Taiwan.

Unfortunately for Tsai, whether her visit counts as a success will not be entirely up to her. The Chinese Communist Party (CCP), which maintains a party-to-party relationship with the ruling Kuomintang, has long been wary of the independence-leaning DPP. Beijing has already begun warning Tsai not to engage in “pro-independence” activities while in the United States. Just last week, China’s Taiwan Affairs Office issued a statement, explaining “we firmly oppose any person engaging in any form of ‘Taiwan independence’ separatist activities in the international arena.”

But Tsai is not necessarily the primary target of such admonitions. These statements from Beijing are as much about shaping American reactions to the candidate as they are about shaping the candidate’s own positions. China has succeeded in convincing much of U.S. foreign policy officialdom that cross-Strait relations will remain stable as long as Taiwan does not rock the boat. Statements like the recent one from the Taiwan Affairs Office are designed to remind U.S. policymakers of the difficulties that arose between Washington and Taipei the last time a DPP politician, Chen Shui-bian, was president of Taiwan (2000-2008). Indeed, Chinese diplomats are undoubtedly repeating the message ad nauseum during in-person meetings with Washington officials. Beijing will pounce on any remarks from her that suggest a divergence from Taipei’s current conciliatory approach to the mainland.

Unfortunately, the Obama administration has proven itself susceptible to this sort of Chinese shaping operation. While Tsai Ing-wen was visiting Washington during her last run for president in 2011, a senior administration official went out of his way to undermine her campaign, telling Financial Times, “she left us with distinct doubts about whether she is both willing and able to continue the stability in cross-Strait relations the region has enjoyed in recent years.” Worse still, according to the official, Tsai and her team did not “fully appreciate the depth of [Chinese] mistrust of her motives and DPP aspirations.”

But one wonders in turn if the Obama administration fully understands the depth, within Taiwan, of popular mistrust of Beijing, which has made no secret of its intention to unify the strategically located island with the mainland, by force if necessary. It was a little over a year ago that the “Sunflower Movement”—a coalition of student and civic groups in Taiwan—brought the Taiwanese government to a virtual halt in protest of a cross-Strait trade agreement that it believed was being pushed through the legislature without serious review. It might be conventional wisdom in Washington that the island and the mainland are headed toward an inevitable convergence, but, if election results and polls in Taiwan are taken seriously, this would be news to the people of Taiwan.

Tsai is undoubtedly in a difficult spot. Because the relationship with the United States looms so large in Taiwan, Tsai has to visit Washington as part of her presidential campaign. On the other hand, she has reason to worry that a less-than-amicable reception might be in store for her in what should be the friendliest of foreign capitals.

Ironically, Tsai’s best bet to ensure the visit is a success may be to make the case that cross-Strait relations are not nearly as stable as they appear; that she has a realistic understanding of how far and how quickly Taiwan’s domestic politics will allow ties with the mainland to advance; and that a policy based on such an assessment is the most likely to avert miscalculations and unrealistic expectations in Beijing, thus contributing to greater stability. As she has put it, if president, she intends to manage cross-Strait relations on the basis of “maintaining the status quo...in a way that avoids surprises,” but to do so on “a more sustainable, more democratic track.”

Still, the onus is on the Obama administration to avoid taking sides in Taiwan’s presidential election as it did so publicly in 2011. The United States should value its democratic partners precisely because they are democratic. Undermining the democratic processes in friendly states will only serve to undermine, over the long-term, a U.S. foreign policy that supposedly favors freedom’s global advance.

Michael Mazza is research fellow in foreign and defense policy studies and Gary Schmitt is director of the Marilyn Ware Center for Security Studies at the American Enterprise Institute.