Taiwan's National Security Is at Risk 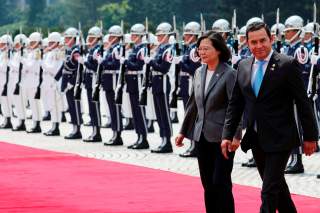 Taiwan’s military must feel pressured on two fronts these days. Chinese People’s Liberation Army jets and ships routinely menace, while the Americans routinely nag—with the best of intentions of course.

Beyond the advice always gushing forth from Washington-based think tanks and pundits, Americans are shuttling through Taipei offering guidance: Spend more on defense . . . become a “porcupine” . . . buy this . . . don’t buy that . . . do this . . . don’t do that . . .

Taiwan might feel like saying: “We get it . . . now how about letting us train and exercise with you?”

U.S. policy has—even if not always intentionally—isolated Taiwan’s military over the forty years since Washington shifted diplomatic recognition from Taipei to Beijing. Arms are grudgingly doled out—as typified by the Obama administration’s single arms sale to Taiwan in eight years. And there are strict American-imposed limits on military to military interaction—to the point Taiwan and U.S. service members wear civilian clothes when visiting each other’s countries.

Taiwan military personnel do attend U.S. service schools and there are frequent consultations and discussions between the militaries, along with observation teams sent to watch each other’s exercises. And American trainers conduct skills training in Taiwan, while Taiwan Air Force F-16 pilots receive training at Luke Air Force Base in Arizona.

But the Americans won’t actually do joint exercises or operations—and that’s a necessity for Taiwan’s military—as it is for any military seeking to maintain or improve capabilities. This is particularly so for a small force that depends on outside support.

As a result, Taiwan’s armed forces are something of a “Galapagos military.” Against the odds, they are still highly professional, but not as capable as they should be. And one wonders how well Taiwan and U.S. forces can defend Taiwan if they never practice outside tabletop exercise—and sometimes seem afraid to be seen together.

This brings to mind a baseball team that never plays other teams. Instead, it’s “chalk talks” and intra-squad games using equipment that it scrounged up.

This decades-long isolation also demoralizes the Taiwan military—while reducing public confidence in the military. And both the Taiwan government and the public wonder if the Americans can really be counted on.

Even worse, Beijing reckons that if it keeps tightening the screws on Taiwan and creates an overwhelming military imbalance the Americans will back off when the time comes—figuring the price is too high.

And by now, Taiwanese might even feel numb to these American professions of support—without more tangible evidence of commitment—particularly joint exercises. And they may even think, “why bother defending ourselves?”

Washington took a step in the right direction in 2017 when a platoon of Taiwan Marines trained with U.S. Marines in Hawaii. But then the Trump administration squandered an opportunity to invite Taiwan to the RIMPAC 2018 exercise after withdrawing the PRC’s invitation. Indeed, local representatives from the Taiwan Economic and Culture Office in Honolulu were not even allowed the watch the exercise.

U.S. government officials might usefully remember that they represent the United States of America—still the world’s most powerful nation—and can decide who they associate with.

The PRC will complain. It always does. But Washington’s fear of joint training is evidence Beijing still has a veto on U.S. behavior towards Taiwan—and has for decades—aided and abetted by the U.S. State Department and U.S. administrations (of both parties) and the “business lobby.” The Pentagon hasn’t exactly fought hard to change things either.

Paradoxically, support for Taiwan is practically the only subject for which there is overwhelming and bipartisan congressional support. The Taiwan Relations Act (TRA) was in fact enacted in 1979 out of fear a President might sell out Taiwan.

And National Defense Authorization Acts (NDAA’s) since at least 2017 specifically call for joint exercises with Taiwan. Yet almost nothing has happened.

Meanwhile, U.S. forces conduct military exercises in the Baltic States that Russia appears to covet. And Vladimir Putin is no less scary than Xi Jinping. But Russia doesn’t make what Wal-Mart sells—nor is it viewed as a magical place where foreign businessmen believe they will get rich selling one of something to every Chinese person.

The United States must take the first step. It’s the big guy backing up a smaller friend facing a powerful bully. Indeed, treat Taiwan like a real ally and the Taiwanese public just might start thinking the Americans are serious.

Sending generals and admirals to visit Taiwan and holding more consultations and gift exchanges isn’t what’s needed. That’s a bigger deal to the Americans than to Taiwan or China.

What’s needed is something substantial that demonstrates commitment and draws Taiwan’s military out of isolation.

Here is a suggestion:

Create a Central Pacific Humanitarian Assistance/Disaster Relief (HA/DR) Force—using U.S. and Taiwan amphibious forces to plan, train, and exercise for HA/DR operations—and respond when disasters occur—as they always do in the region. Locate the outfit in Taiwan and attach U.S. officers—perhaps from the U.S. Navy’s Seventh Fleet and 31st Marine Expeditionary Unit that are well-versed and prepared for disaster response.

While making use of civilian resources, this should be a military to military based effort. For one thing, militaries have the necessary personnel, hardware, equipment, and organization. And if it’s exclusively a “civilian” effort—in hopes Beijing won’t object—that suggests ongoing fear of Beijing and that Chinese deterrence is working nicely.

An advantage of using amphibious forces is that it’s the equivalent of CrossFit training—exercising air, sea, and ground capabilities at the same time. And it exercises skills that are the same as for “regular” military operations—except for the shooting.

Do some of this joint training and Taiwan military skills will improve in short order—while also improving the ability to operate with American forces—and vice versa.

The U.S. territory of Guam is a perfect training location, and there are other locales elsewhere in the South Pacific where Taiwan still has diplomatic allies.

To bring this to fruition will require Taiwan liaison officers at American headquarters in Hawaii. And the Americans can assign Chinese-speaking Marines and Navy officers as liaison officers to Taiwan forces. And each nation’s amphibious ships making port calls in each other’s ports will be a natural outcome as well.

Expect political and psychological knock-on effects in Taiwan, Washington, Beijing, and regionally. People will see Americans are serious. Adversaries might reckon they’ve underestimated U.S. resolve. And friends like Australia, Japan, or the French and British might get involved. And maybe a few “undecided” nations will come down off the fence.

There is precedent for all this. Taiwan Navy ships and Air Force C-130s delivered emergency supplies to the Philippines in 2013 after Typhoon Haiyan. And more recently, Taiwan military medical staff joined in U.S.-led HA/DR exercises in Kiribati in 2017 and the Solomon Islands in 2018—both nations that recognize Taiwan. In 2009, the USS Denver amphibious ship with heavy-lift helicopters provided assistance to Taiwan following Typhoon Morakot.

A Central Pacific HA/DR Force also addresses an oft-heard complaint in Washington that “Taiwan won’t fight.” But how does anyone know—until Taiwan’s military is treated like an ally and gets a fair chance to show what it can do?

Taipei’s government does need clearer thinking on defense strategy and to spend more money on defense—and to spend it properly. Making military service an attractive and respected profession ought to be as much a priority as new hardware.

But the United States can encourage and bolster Taiwan’s effort by inviting the military to “come out and play.”

Even before an HA/DR force comes to pass, with some effort and imagination it’s possible to arrange joint training between the U.S. Seventh Fleet and Taiwan Navy, or even have Republic of China Air Force aircraft train with U.S. forces on Guam.

A couple examples: Each fall since 2006 the U.S. INDOPACIFIC Command has conducted exercise Valiant Shield near the Marianas Island Range Complex. The purpose of the exercise is bring together U.S. joint forces to train together in the high-end of combat operations. Including Taiwan in this training would make sense as they would have to operate alongside their American counterparts in any invasion effort by the PLA.

Or the United States could invite the Taiwan Navy to participate in Annual Exercise, the bilateral maritime exercise with the Japanese Maritime Self Defense Force and the U.S. Seventh Fleet. Doing so would ensure that the Taiwan Navy is not just expected to sit in port should Beijing decide to conduct a “short, sharp war” attack against the Senkaku Islands or Taiwan. Japan might well resist, but Tokyo is also aware that “Taiwan’s defense is Japan’s defense”—as JSDF officers have been saying for years.

This all should have been done a decade or two ago. It’s scandalous that it has taken so long. In fact, one sometimes suspects the U.S. Department of Defense, the State Department (and maybe the U.S. government) really do not want Taiwan to come to its own defense and would prefer their aircraft stay in their hangars, their warships in port and their tanks and ground forces in garrison.  Maybe it is this issue that is really at the core of why the United States hasn't done more to exercise with their counterparts in Taiwan.