Taiwan's New President Will Have to Play Nice with China 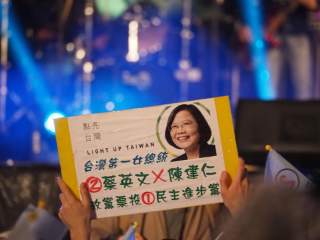 The Democratic Progressive Party (DPP)’s return to power signifies shifting political preferences among the general public in Taiwan, but contradictory preferences and circumstances surrounding Taiwan threaten to face the new government with a dilemma.

As demonstrated by recent polls, as well as social movements such as the Sunflower Movement, people in Taiwan display an increasing trend toward a Taiwanese identity, and a general hope for the island to move toward being a normal sovereign state, or at least retaining de facto independence from China. Obviously, Taiwanese identity is in conflict with the Chinese nationalism that dictates Taiwan should be unified by China. The failure of the Chinese Nationalist Party, also known as Kuomintang (KMT), in the last elections can be partly attributed to its China-friendly attitude, which was realized through cross-Strait integration, while the DPP is usually seen as a promoter of Taiwanese identity. However, Taiwanese people also hold certain universal goals in common, such as prosperity and well-being, which may preclude promoting Taiwanese identity in economic and military dynamics across the Strait.

Growing cross-Strait economic ties have become a useful source of leverage for Beijing to exert power on Taipei. Since the early 1990s, cross-Strait economic ties have developed rapidly, eventually being institutionalized during Ma Ying-jeou’s two presidential terms. Currently, China is Taiwan’s largest trading partner, both in exports and imports, while Taiwan’s role in the mainland Chinese economy is shrinking. Thus, the bilateral economic interdependence between the two is in fact asymmetrical, providing excellent conditions for Beijing to launch an economic war on Taipei. In its disputes with Japan and the Philippines in 2011 and 2012, respectively, China demonstrated its willingness to use sanctions to exert pressure on its rivals. China’s large economic capacity, authoritarian regime and various social control mechanisms are likely to absorb most side effects of such economic warfare. Tight cross-Strait economic ties, including more than one million Taiwanese employees and various companies’ investment in China, will endow Chinese leaders with broader economic options. Unlike military actions, Beijing’s nonviolent economic reprisals would leave no third party, such as Washington, able to intervene.

In the face of economic warfare, popular support for the DPP administration could be in doubt. A major reason voters backed the DPP rather than the KMT in the last election also has to do with the latter’s poor economic performance. Those economic voters, salient in most Taiwanese elections, would not bear hardship for the sake of an identity, as evidenced by their previous support for Ma’s openness to China in exchange for interest in cross-Strait economic ties. As for members of the younger generation, who form the base of supporters for a Taiwanese identity, their generally fragile economic status and lack of tough experience may lead them to retract support in a recession. Both public opinion in the short term and elections in the medium term would serve as sources of pressure on the DPP administration for people who prefer economic stability with China to a Taiwanese identity.

Despite the relative improbability of an attack, military defense is indispensable for Taiwan, especially in promoting an identity separate from China. But the DPP administration may face difficulties in improving its defense outlook. Taiwan’s defense budget has been insufficient compared with the threats to its survival. Since the 2000s, Taiwan’s defense budget has been lower than 3 percent of its GDP; in the last two years, it has even dipped below 2 percent. For a potential enemy of the second strongest military power in the world, Taipei’s commitment to defense is unbelievably low. Due to limited investment, a range of World War II–era weapons is still in service, not to mention other, later types that have not been upgraded. Current military-modernization projects, such as upgrading F-16 and Indigenous Defense Fighters (IDF) as well as stealth corvettes, may not be sufficient to maintain Taiwan in a favorable position in the cross-Strait balance of forces. As the DPP administration claims to launch several major indigenous projects to development sophisticated weapon systems, such as submarines and trainer aircraft, the defense budget may see modest increases. But the Taiwanese government’s narrow financial capacity, due to rising deficits and the heavy burdens of social welfare and health insurance, could constrain investment, since people would also oppose increasing taxes for defense.

The poor performance of recruiting volunteer soldiers, and the popular negative attitude toward conscription, are human-resource problems that plague defense. Considering Taiwan’s location in range of various Chinese weapon systems, an “all-volunteer force” (AVF) is not suitable for Taiwan, because all Taiwanese residents would be involved into warfare during wartime, rather than just the military. Furthermore, thanks to policies that provide multiple open channels for Chinese visitors to enter Taiwan, sabotage and other irregular tactics are likely to be applied. Therefore, Taiwan requires sufficient troops to respond to both internal and external security threats. If the DPP administration is unable to resume conscription, an AVF that struggles with recruitment may cause low readiness due to lowly manned units, or even a further downsizing of the armed forces. Either outcome would worsen the unfavorable military balance across the Strait. However, conscription is unpopular among Taiwanese people, since it disrupts personal development, while there is no robust martial culture, and the military provides inadequate training. In short, the DPP administration may have to make a difficult choice between defense and popularity.

So far, the DPP’s solution to those contradictory preferences seems to concentrate on the economy and other issues of well-being, rather than Taiwanese identity, through its statements of policy since January. For examples, DPP officials and legislators have welcomed further Chinese investment and tourists, while accepting the title of “Chinese Taipei” in the World Health Assembly. However, when the DPP was an opposition party between 2008 and 2016, it criticized similar policies carried out by the previous KMT administration. Furthermore, with the DPP’s pro-independence reputation, Beijing is unlikely to wholeheartedly pursue integration with the DPP administration, as it did with the KMT one, evidenced by the closure of bilateral channels after May 20 unless the latter satisfies the former in issues of sovereignty, such as the 1992 consensus. Once the DPP accepts China’s conditions, its differences with the KMT would be trivial.

As a result, the DPP administration faces a dilemma: to be more like the KMT, or to suffer from economic or even military vulnerabilities. Although President Tsai Ing-wen emphasizes the Southward Policy to build up economic ties with Southeast and South Asia as alternatives to present economic integration with China, such a major transformation would be impossible to achieve in four years. In Tsai’s first term, the dilemma will not disappear, and Taiwanese people will have to decide whether a DPP administration with less focus on a Taiwanese identity is acceptable or not.

Wu Shang-su is a research fellow in the Military Studies Programme of the S. Rajaratnam School of International Studies (RSIS), Nanyang Technological University. He previously worked in the Legislative Yuan in Taiwan.