Taiwan's 'One Country, Two Systems' Is as Good as Dead 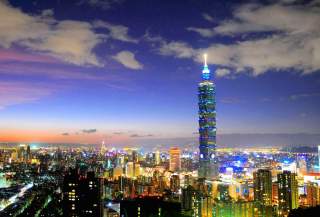 The latest round of protests in Hong Kong following Beijing’s disqualification of two pro-independence lawmakers isn’t only a symptom of the territory’s growing volatility: it once and for all closes any possibility of the “one country, two systems” formula ever being applied to Taiwan.

As police hit protesters with truncheons and attempt to disperse them with pepper spray, across the Taiwan Strait in democratic Taiwan, twenty-three million people are taking note, aware more than ever since retrocession in 1997 that “one country, two systems” is not a viable option for them, if indeed it ever was.

The slow erosion of the Special Administrative Region’s freedoms over the years, along with the displacement of Hong Kong as China’s economic epicenter and now the direct involvement by China’s top legislature in the territory’s electoral politics, have dispelled any illusion that the Chinese Communist Party (CCP) was committed to upholding two separate, and sometimes contradictory, systems under “one country.” As long as Hong Kong did not challenge the central government’s control over China’s disparate regions or put that control into question, Beijing was willing to countenance the illusion of “two systems.”

The emergence of pro-localization and -independence politicians in the wake of the Umbrella Movement in 2014 has put an end to all that. There never was any doubt that such movements would immediately be targeted by the pro-Beijing Hong Kong authorities and ultimately Beijing itself. Allowing the existence of secessionist elements in Hong Kong would take the territory down a slippery slope and could eventually encourage pro-localization elements in other parts of China to go down a similar path. So when Sixtus Baggio Leung Chung-hang and Yau Wai-ching, the two young elected lawmakers at the heart of the ongoing crisis, tinkered with the oath before joining the Legislative Council, committing to defending the Hong Kong nation and unfurling a banner reading “Hong Kong is not part of China,” they sealed their fate and that of their followers along with them. Both would have been very naive if they thought they could get away with challenging Beijing, which regards their actions as a threat to national security.

The outcome—the likelihood of tightened security laws and a crackdown on civil society are two likely scenarios—may in fact be what the two lawmakers were hoping to achieve. The gamble may not pay off: critics could point out that the pair have gone too far and are putting social stability at risk. Conversely, Beijing’s intervention could harden pro-localization elements and spark a new confrontation, with renewed, and perhaps more serious, violence a very real prospect for the territory. This is a confrontation that the independence movement in Hong Kong has little hope of surviving. That its members are nevertheless willing to take the risk is indicative of how untenable the situation has become for them. By looking at it this way, the seemingly irrational decision to challenge Beijing starts to make more sense: whatever happens, anything is better than the status quo.

This development is perhaps what will have the greatest impact on Taiwan’s willingness to unify with China. In less than twenty years, “one country, two systems” has not only run out of steam; it has given rise to a movement—seen as hard-line by some—that would have been unthinkable just a few years ago. Most of those who opposed rule by Beijing from the outset left prior to 1997; others remained behind, waiting to see how retrocession would affect the former colony’s liberal, albeit never democratic, way of life. Ironically, many of the youth who are leading the more radical anti-Beijing groups were too young to have made such calculations at the time Britain returned Hong Kong to China. The disillusionment is therefore indigenous and the result of the immediate experience of growing up in Hong Kong under “one country, two systems” rather than the result of a contrasting with prior experiences under British rule. For Beijing, that is a big problem. Hong Kong’s activist youth isn’t even conscious of a taking away, with little if any direct experience of what it was like to live in Hong Kong prior to handover. Their only experience as citizens of the People’s Republic of China is untenable, “two systems” a fantasy that they seek to debunk.

Beijing’s problem when it comes to Taiwan, which is also to be “reunified” under “one country, two systems,” is that the twenty-three million people there would very much be conscious of the taking away, of the cost of becoming a satellite of the central government. Still, no matter how generous Beijing’s terms might be (a federal-style formula is about as generous as it could get), unification would by necessity involve some loss in terms of Taiwan’s ability to chart its future. Whether the majority of Taiwanese would willingly absorb such costs in exchange for the “benefits” of unification is very much in doubt. Moreover, while the pro-localization and -independence elements remain a minority in Hong Kong, they constitute a clear majority in Taiwan as a result of the island nation’s idiosyncratic experiences over several decades, island geography, and embracing of a liberal-democratic way of life that is now intrinsic to its citizens’ self-identification, regardless of their voting preferences (less than 10 percent support unification, and those numbers continue to drop).

Thus, whether under the Democratic Progressive Party (DPP) or Kuomintang (KMT), and unless all the skeptics abandoned Taiwan as many Hong Kongers did prior to 1997, the costs of unification would be felt and known by all, especially Taiwan’s youth, whose only experience as citizens is that of being part of a liberal democracy. Few are those who would willingly give up this way of life. Thanks to Leung and Yau, the costs can now be observed in Taiwan: anyone who espouses localism or independence would be disqualified, which tellingly would include several lawmakers from the “pro-Beijing” KMT who under “one country, two systems” would themselves be regarded as threats to national security. It would moreover be foolish to imagine that Beijing could ever offer better, more permissive terms to Taiwan than it is willing to extend to Hong Kong; similar restrictions—and in Taiwan’s case those would be losses—would apply.

It’s never been a secret that the “one country, two systems” formula offered to Taiwan as Beijing’s term for unification had little appeal to the Taiwanese. Nevertheless, the Hong Kong experiment represented a chance for Beijing to convince skeptics across the Taiwan Strait that a federalist-style approach was a viable option and that the central government would respect local preferences and conditions. The real sign of failure is not the frustrated old guard in Hong Kong that remembers better days under British rule, but rather the emergence of a frustrated, activist and defiant indigenous movement opposed to Beijing’s rule in direct response to “one country, two systems,” the very system that was supposed to be attractive to the territory’s new Chinese citizens. Unless the CCP demonstrates that it can countenance people like Leung and Yau playing a role in Hong Kong’s politics, which goes against everything that the party stands for, “one country, two systems” is dead on arrival in Taiwan. While their actions are for the betterment of their own society, Leung and Yau are helping to drive the nails in that coffin.