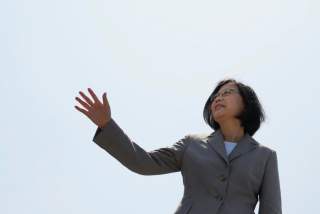 Tsai came into office understanding the challenges facing the nation and set out to meet them with all the attention to detail she pursued as a World Trade Organization negotiator.

First item: Taiwan’s government pension plans were teetering on the edge of bankruptcy. The need for reform was desperate. Cutting payments has never been easy, but going to zero was a real possibility if nothing were done. So the president and the DPP legislature moved to address the issue. In a recent blog in the National Interest, Kwei-Bo Huang called this reform “rude.” Real “rudeness” would have been to do nothing and leave pensioners high and dry.

Also “rude” states Huang was the Tsai government’s move to implement “transitional justice”—dealing with past state sponsored human-rights violations. The law’s objectives include truth seeking, compensation for victims, and bringing about social reconciliation.

The Kuomintang (KMT) kept Taiwan under severe martial law for thirty-eight years. Thousands were jailed or executed for pursuing democratic reforms and human rights. The record clearly shows the brutal authoritarian rule of the Chiangs, yet Huang whines that “no clear definition of ‘authoritarian’” is in play and the DPP has gone too far as it seeks to remove public symbols of the authoritarian past, read statues of Chiang Kai-shek, and deal with assets stolen from state coffers and individual citizens.

While the Labor Standards Act has stirred up intense debate in Taiwan, revisions have been made based on input from a wide cross section of labor and business leaders, and the government stands ready to listen and amend the law as needed. Balancing demands and moving to compromise is the name of the game in governance and President Tsai knows this full well.

The president’s 5+2 major economic development programs are designed to meet the serious issues of wage stagnation and the widening wealth gap by providing new opportunities in industries across the board as well as in agriculture.

The DPP government understands the need for a secure energy supply and reduction of carbon pollution. There are plans underway to bring renewable energy up to 20 percent of Taiwan’s supply by 2025, to add LNG into the energy mix and to get serious about conservation measures. While sectors of the business community might feel “unease” over the energy supply, as Huang indicates, the greater sense of unease that permeates the body politic is the dangers inherent in nuclear power plants sitting on earthquake faults. The nightmare images of the Fukushima disaster haunt Taiwan’s citizens and a nuclear-free homeland is their dream. Getting there demands Tsai’s attention to detail—and gets it.

With the KMT in power for fifty years, the bulk of government funding was concentrated in the KMT’s northern Taiwan base. The Forward-looking Infrastructure Development Program that Huang laments is designed to balance development throughout the island. This economic stimulus project includes investment in rail transportation, water environment, urban and rural development, digital development and green energy.

Huang shows his true-blue colors when he blames President Tsai’s “nonchalance” for the current state of cross-strait relations. All was well, Huang insinuates, when the KMT bowed to the 1992 Consensus, but now all is lost because Tsai refuses to kneel. Ginned up by the KMT’s Su Chi in 2000, this consensus was a “convenient fiction” that claimed both the PRC and the ROC agreed there was “one China” but that each had their “own interpretation.” One small problem, however, is that the PRC side has never agreed to the “different interpretations” part of the equation. There is one China and the PRC is it. There is no way President Tsai, a democratically elected official of the sovereign entity known as the Republic of China, can agree to being a minion of the PRC.

So, yes, the PRC has cut off all official exchanges with Taiwan, cut down the number of Chinese tourists, flown its aircraft around the island and floats its aircraft carrier around Taiwan’s periphery. And that is Tsai’s fault for not kowtowing? President Tsai has gone out of her way to not be provocative and to call for dialogue with China. She has been rigorous about maintaining the status quo across the strait—with Taiwan’s democratic way of life preserved. She has been rebuffed through no fault of her own. The shoe, Dr. Huang, is on the Chinese foot.

A final note: the New Southbound Policy is not a tactic to con the Taiwan public away from cross-strait issues. Rather it is a detailed policy of integrating Taiwan into the wider Asian region through cultural, education, economic and political links.

Dr. Huang and the KMT continue to look longingly to China. President Tsai’s vision is much wider, seeking to move Taiwan into a broader, more constructive role in the Indo-Pacific region. Don’t underestimate her.

Michael J. Fonte is director of the Democratic Progressive Party’s Mission in Washington, DC. He has worked for the DPP since 2002. Fonte holds a degree in Asian Studies from the University of Michigan.