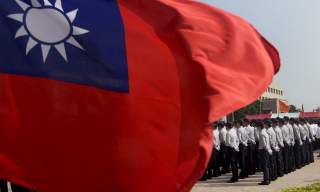 For the past few years, U.S. foreign policy has refocused on the Asia-Pacific region due to its increasing geopolitical significance. The most recent U.S. National Security Strategy released for 2018 stated that Washington’s objectives should include “maintaining favorable regional balances of power in the Indo-Pacific.” But this concept is not new, as the United States has long maintained strategic relationships in the area that have worked to support stability and growth.

It was thirty-nine years ago that the United States signed into law the Taiwan Relations Act (TRA), which was aimed to help “maintain peace, security, and stability in the Western Pacific.” TRA has not only enhanced peace and prosperity across the region, but has also served as a steadfast foundation for Taiwan and the United States to enjoy strong ties for nearly four decades.

The robust bilateral relations promoted by the TRA in the past, present and future were recently highlighted by a Department of State spokesperson who noted that “Taiwan is a vital partner, a democratic success story, and a force for good in the world.”

The profound legacy of TRA is also evident in the legislation of Taiwan Travel Act (TTA), which had overwhelming bipartisan support in Congress, and which President Trump signed into law on March 16, 2018. TTA, passed by both chambers of Congress with unanimous consent, encourages visits between the two countries at all levels. It is a significant step forward, but would not have been possible had there been no TRA to provide the groundwork for such continuing vigorous exchanges.

Another example of enriching the bonds was the inclusion of Taiwan in the U.S. Global Entry Program in November 2017. This allowed for Taiwanese passport holders, including hundreds of thousands of tourists and businessmen each year, to expedite their entry into the United States, five years after Taiwan joining in the U.S. Visa Waiver Program.

Furthermore, Taiwan’s government recently announced that it would assess the feasibility of establishing a United States border preclearance system at its main airport to speed up travel by citizens from both countries. All of these efforts continue TRA’s objectives of strengthening people-to-people relations.

By the same token, the United States and Taiwan continue to work together to address mounting challenges facing the international community. The two countries have forged the Global Cooperation and Training Framework, which brings Taiwan and the United States together to solve global and regional issues by tackling pandemic diseases, sharing experiences in humanitarian assistance and disaster relief, bridging the digital divide, promoting women’s entrepreneurship and political participation, and promoting our core values of democracy and human rights.

TRA embodies the fundamental U.S. commitment to Taiwan, including continued sales of defensive weapon systems and services, and has served as a key to regional peace and stability.

The Taiwan Relations Act, like a sturdy bookend, has firmly held Taiwan-U.S. relations in place for thirty-nine years and will continue to serve as a bedrock of a close and impeccable partnership between the two countries.

Image: Members of the National Security Bureau take part in a drill next to a national flag at its headquarters in Taipei, Taiwan, November 13, 2015. REUTERS/Pichi Chuang