Take It from 3 Former Ambassadors: Neglecting Diplomacy Will Hurt America 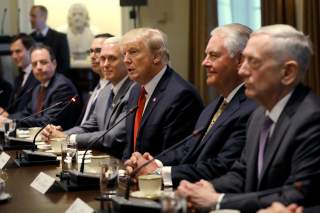 “Our military leaders and our diplomats not only represent a symbol of America’s enduring commitment to the region, but they also build trust through partnerships that have an important stabilizing effect when trouble looms.”—General James N. Mattis, March 1, 2011

The Trump administration’s budgetary proposals and decisions reflect a growing gap between strong support for increased military action and capability, and a significant reduction in budgetary support for diplomacy. Military force alone cannot secure America’s national-security objectives; they can only be met through a solid fusion of force and diplomacy.

Without a robust political and diplomatic component, no foreign- and security-policy strategy can succeed.

The numbers only partly explain the new priorities. The administration proposes a 10 percent increase in the Pentagon’s budget and a 29 percent decrease in State’s.

In the first hearings explaining President Trump’s national-security budget, Secretary of State Rex Tillerson told Congress, “The first responsibility of government is the security of its own citizens, and we will orient our diplomatic efforts toward fulfilling that commitment.”

To be sure, protecting American citizens must be the president’s first responsibility. But if the United States is to invest in greatly increasing its hard power to sustain the most powerful military in the world, it must expend greater resources to strengthen America’s smart power and its stature as the global leader of humanitarian causes, cultural exchange, and international economic cooperation and development. These are powerful tools in today’s diplomacy.

It must fund and better deploy the world’s premier diplomatic professionals to support the president’s national-security goals and to help reach diplomatic solutions that protect the homeland as well as the tens of thousands of Americans serving and fighting abroad.

The secretary of defense has been given broad authorization to conduct air strikes, deploy larger numbers of support troops in Iraq and Syria, increase support for Saudi military action in Yemen and raise the level of military forces in Afghanistan. There has been no parallel diplomatic effort. Even if the U.S. were to deploy hundreds of thousands of troops, political solutions to thorny foreign-policy problems will remain elusive without a focus on diplomatic strategy.

The U.S. military succeeds only when it fights in support of clear national objectives. Without such clarity, America’s highly skilled armed forces cannot know when they have achieved their mission. The U.S. military has been engaged heroically and expertly for over fifteen years in Middle East conflicts with ever shifting objectives. Most battles have been won, but not one war. For decades America’s top military brass has argued that a national strategy must be defined by complementary diplomatic and military tracks. Those tracks now seem headed in different directions.

These oft-contradictory national objectives, however, cannot be achieved by military action alone. Here are some building blocks for an integrated military and diplomatic strategy:

First, prioritize objectives, work with all partners and engage opposing governments (when possible) to defeat common enemies (particularly ISIS) and to seek political resolutions to conflicts.

Second, recognize that ending the conflicts in Syria, Iraq and Yemen will not be possible unless Saudi Arabia and Iran reach a modus vivendi. The long-term objective of the United States and others, such as Russia and Turkey, should be to reduce Sunni-Shia tensions and diplomatically encourage a compromise between Saudi Arabia and Iran—as opposed to a policy designed to inflame passions and drive them toward another regional conflict.

Third, pursue a follow-on agreement to the JCPOA that will remove the threat of Iranian nuclear weapon long into the future. A regional crisis would be exponentially more difficult to manage if Iran acquired a nuclear weapon. The JCPOA removes that threat for the present.

The Trump administration has now committed additional American military forces to the longest open-ended and exhausting set of wars in American history. Without a defined political, diplomatic and military strategy these wars will lack clear purpose and remain condemned to stalemate at best, possibly for the next decade.

Secretaries Mattis and Tillerson, who appear to be building an important partnership, should urgently encourage the White House to match increased American military power in the region with an equally robust diplomatic and political strategy that points toward defined end games in the violent Middle East.