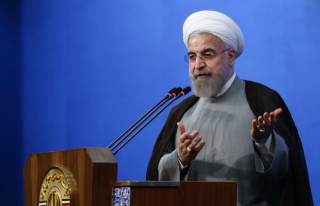 The best approach to Iran in the wake of President Obama’s deal is to recognize the complex nature of the problem, and the absolute need for a well-considered and comprehensive approach. The agreement cannot and should not be simply repudiated on the next president’s first day in office, as some Republican presidential contenders have suggested. The agreement is terrible, but once concluded, the national interest requires that it be undone only with care, patience, and masterful diplomacy—an approach championed by Gov. Jeb Bush and Senator Lindsey Graham. Indeed, to suggest otherwise, is to fail to appreciate the full extent of the damage done by the deal and the difficult foreign-policy legacy President Obama is leaving for his successor.

First and foremost, simply abrogating the deal—which already has been enshrined in a Chapter VII UN Security Council Resolution binding on the United States and all members of the United Nations—would actually put the United States in violation of its international obligations and will hand tremendous strategic benefits to Tehran. This may be inevitable, since Russia and China will certainly take advantage of any American action against Iran to score diplomatic and strategic points against us. But, we do not have to make it easy for them, and we should not.

In addition, whatever action the new president takes on January 20, 2017, Iran will remain free of the vast majority of the sanctions that brought it to the bargaining table in the first place. While the next president will be able to vitiate promptly President Obama’s waivers of the existing statutory sanctions—some of which are certain to go beyond his lawful waiver authority—thereby making the existing domestic statutory sanctions available, it would still make sense to consult with Congress on whether the sanctions regime needs adjustment in light of new circumstances.

Although President Obama has ignored Congress, or affirmatively sought to curtail its constitutional prerogatives, the next President should work with Congress and must seek to build a bipartisan consensus on how to meet the Iranian challenge. As Supreme Court Justice Robert Jackson wrote in the landmark case of Youngstown Sheet & Tube Co. v. Sawyer (1952), a president acts at the height of his constitutional authority when working with, rather than against, Congress.

Second, even if international sanctions can somehow successfully be “snapped back,” as the Obama administration claims, it is far from clear whether our allies will follow—even after the case is made to them. They most certainly will not blindly follow some inauguration day stunt and put themselves in violation of their international obligations too. While the United States can, of course, lawfully proceed with unilateral sanctions, this would not be an optimum approach. Nor will threatening at the outset to sanction the banks, other businesses and citizens of third countries, including our key allies, for continuing to deal with Iran help the United States convince its allies to reinstitute these programs. Unilateral U.S. action should be our last, not first, response.

Moreover, it has taken nearly forty years of various sanctions regimes, and at least a decade of intense and nearly complete sanctions, to give the United States and its allies the leverage they now have. That leverage cannot and will not be restored overnight. As a consequence, if the Iran deal is renounced by the United States on the new president’s first day in office, the certain result will be an Iran free of both sanctions and whatever obligations it has undertaken, and the United States isolated and humiliated. Everyone can agree that this is not the way to serve the country’s interests, or to begin a successful presidency.

In addition, simply renouncing the deal and imposing sanctions cannot end Iran’s regional and global ambitions—nuclear and otherwise. Iran’s nuclear program—for obvious reasons—has been the most important issue in that country’s relations with the West, but it is very far from the only issue. Iran remains one of the most prolific state-sponsors of terrorism in the world. It has and will certainly continue to seek hegemony in the Middle East, to deliberately destabilize its neighbors and other states in the region, and to promote ballistic missile proliferation and human-rights abuses throughout the Near and Middle East and beyond.

Only a comprehensive strategy, led by the United States and supported by our major allies, can neutralize Iran’s malign activities, and this will take time. In particular, that program must take into account the views and interests of U.S. allies in the region, including Israel and those Arab States that understand and fear Iran’s ambitions and capabilities.

Finally, a simple renunciation of the Iran deal will involve the inevitable risk of a military confrontation with Iran, perhaps a confrontation in which the United States would be unable to count on many allies beyond Israel. Like potential international opprobrium, this may be inevitable. However, no responsible president would set foot on that path without first having a sound national-security team in place and reviewing the military options and the nation’s capabilities at that time. A president who has pledged simply to abrogate the Iran deal on his first day in office, and who then decided to behave responsibly and make these assessments, will be seen as having “backed down” even before his first full workday. There simply is no reason to do this. Such an action certainly cannot be justified as a matter of sound statecraft and is nothing more than an opportunity for some pre-primary chest thumping.

President Obama has negotiated a bad deal, and he very likely will impose this deal on the country. The next president will have to clean up the mess, but must do so through a considered and measured strategy that actually has some real chance of success.

David B. Rivkin, Jr. and Lee A. Casey are constitutional lawyers at Baker Hostetler, LLP and served in the Justice Department under Presidents Reagan and George H.W. Bush. Rivkin is also a Senior Fellow at the Foundation for The Defense of Democracies.