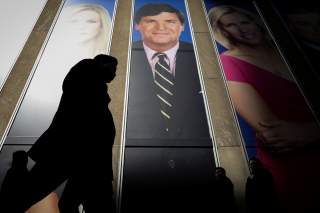 Over the past few years, an unusual political-philosophical realignment has appeared in the United States, one which brings together a certain kind of Christian conservative and a certain kind of secular leftist.

Judging from their public pronouncements, what unites these contrasting camps is a concern for ordinary workers, their families and their communities, and a refusal to worship at the altar of profit maximization and technological change. And that is just by way of first approximation. This is still a moving target. By far the most well-known member of the group to which I am referring is Fox News host Tucker Carlson. His show is the second most popular news show on American television today. With a figure like Carlson finally championing these ideas, a “new” strain of conservative thought has finally pushed its way into the public square.

Some intensely dislike this controversial Fox News host, others lionize him. Love him or loathe him, the fact remains that—especially by comparison with the rest of mainstream news punditry—he is often remarkably courageous and honest.

Two months ago, for example, on a segment called What is destroying rural America?, Carlson looked into how hedge funds such as Paul Singer’s Elliot Management have been destroying manufacturing jobs, industries and even entire cities all over America. Carlson contrasted vulture capitalists like Singer with the likes of Andrew Carnegie who, during America’s Gilded Age, used some of their wealth to build attractive libraries for ordinary people.

For today’s capitalists, by contrast, noted Carlson, “the model is ruthless economic efficiency: buy a distressed company, outsource the jobs, liquidate the valuable assets, fire middle management, and once the smoke has cleared, dump what remains to the highest bidder, often in Asia.” That is what has happened all over the country, making a few people “phenomenally rich” even as entire communities are destroyed. He goes on to provide all the excruciating details regarding how the once-thriving small town of Sidney, Nebraska, was brought to ruin by Singer’s hedge fund.

It was a brilliant and important piece of reporting, to be sure, but it was also an example of a sea-change in American politics. Here was an American conservative making the kind of critique of untrammeled capitalism formerly associated only with the Left. That part of the Left, that is, that cares about communities and ordinary people more than it cares about identity fluff and political correctness.

Six months earlier, Carlson had invited to his show Johnny Burtka, executive director of The American Conservative. Burtka lamented that neoconservatives and neo-liberals had pushed through trade policies that transformed America’s once-great manufacturing towns into impoverished wastelands—not unlike the wastelands this same baneful coalition had created in the Middle East thanks to its policy of forever war. Carlson agreed. He then asked why America can’t have a party that, without being “socialist,” and without being “crazy on social issues,” for example by abetting late-term abortions, puts the economic well-being of its country and its workers first.

In asking this question, Carlson has set the terms for defining the next American political alignment—the one that will replace the increasingly grotesque duopoly of Tweedle-Dem and Tweedle-Repub.

On domestic economic and foreign policy dimensions, the conservatives like Carlson and Burtka align closely with many on the Left. By “Left” I am referring to a media-savvy group who, at least for the most part, supports the foreign policy views of Democratic presidential candidate Tulsi Gabbard and the economic policy views of the “socialist” presidential candidate Bernie Sanders.

Carlson, to be sure, has tried to tar Sander by association with the late USSR (“where Sander’s spent his honeymoon,” as the Fox News host recently laughingly put it). And yet neither Sanders nor his typical supporter is interested in the state seizing the means of production and abandoning market economics altogether. What they want, for the sake of concrete communities, is to place some limits on markets. Carlson, for his part, similarly calls for limits on capitalism. During a YouTube debate with Ben Shapiro about automation in the trucking industry he stated, “Capitalism isn’t a religion—there’s no Nicene Creed of capitalism that I have to buy into.” He said he wouldn’t hesitate for a second to ban driverless trucks if it means assuring good jobs for the millions of men whose families depend on it.

Carlson, to his credit, has been equally bold, and truthful, in his critique of America’s permanent policy of permanent war. To my knowledge, he is the only mainstream media personality to have given any air-time to recent revelations about how the UN OPCW, responsible for investigating chemical weapons issues, faked the results of its own inspections in order to support the storyline that Assad’s government was at fault.

Carlson has repeatedly called out the arch-neoconservative John Bolton, once comparing him to a tapeworm that, despite all the pain and suffering he causes, is impossible to dislodge from America’s foreign policy establishment. Carlson, furthermore, never bought the storyline about Russiagate and he doesn’t see the logic of promoting a new Cold War with Russia over a bunch of Facebook ads. After the debacle of the Mueller report, he expressed anger about how long this for-the-most-part manufactured scandal has distracted America’s “ruling class” from dealing with the country’s massive, real problems.

Carlson is not a theorist. He is not even, not really, as he readily admits, an intellectual (an “egghead” as the popular phraseology would have it). He has something in common with Tulsi Gabbard, an increasingly frequent guest on his program, and someone Carlson clearly greatly respects. Both have a combative streak. Instead of hiding behind the security of polite opinion, both regularly insist on saying out loud the obvious truths they can see with their own two eyes. In this sense at least, both are philosophers.

A coalition, to be viable, obviously has to have more than one member. Who else is in this purported Carlson Coalition? It seems that this incipient realignment includes such journalist-activists as Jimmy Dore (The Jimmy Dore Show), the Grayzone broadcast’s Max Blumenthal, Aaron Maté and Anya Parampil. Also Krystal Ball and Saagar Enjeti of The Hill’s YouTube news show “Rising.” Two prominent voices from across the pond—the English essayist Peter Hitchens (like Carlson, a Christian and a conservative) and former British Amb. Craig Murray (a libertarian of sorts)—also make a nice fit. And one could easily name a number of others.

What does this mixture of conservatives and lefties have in common? For one thing, they agree on the unproven status of Russiagate, consider it an overblown and dangerous distraction. Of perhaps greater interest here is their epistemological warrant for not believing it: they don’t see any good evidence for it. In other words, it is not from some innate affection for “Putin’s Russia,” as the inevitable attack phrase goes.

They also agree that the wars the United States has fought these past twenty years were disasters based on lies. They agree on this because it is true. I won’t tire the reader with footnotes here. Look it up. Start, if you haven’t already, with Timber Sycamore (the secret operation organized by the CIA to equip an insurrection to overthrow Assad in Syria). Better yet, watch this segment of the Jimmy Dore show where Columbia professor Jeffrey Sachs tells you about it.

And finally, the members of this ‘coalition’ agree that American (and British, etc.) workers have been shafted by run-away capitalism shorn of commitment to nation and community.

There are also important areas of disagreement. Among the American contingent, these relate, probably first and foremost, to issues of race and immigration policy. Blumenthal has castigated both Trump and Carlson on this very issue. But disagreement in this area has not prevented Blumenthal (or Anya Parampil or Aaron Maté) from appearing on Carlson’s show. What is striking is how often all of these journalist-activists refer to one another’s work, quote each other’s statements, appear on one another’s shows.

On social issues like abortion and gay marriage, the sides are undoubtedly at odds. Dore, for his part, has occasionally ridiculed his former Catholic faith (he refers to himself as ‘a jaggoff nightclub comedian’), especially as regards sexual morality, abortion and the like. If Christian faith is important in a positive sense to any of the leftists in this group, they have given no indication of it. Meanwhile, Carlson, Burtka and Hitchens are all Christians. Possibly so is The Hill’s Saagar. Given all these areas of disagreement, I may be jumping the gun in calling this network a coalition.

And yet if something other than “liberalism”—in the dual sense of extreme capitalism and extreme individualism/voluntarism—is going to have a future in this country, these are the cultural traditions we are going to have to build on. And for the moment, at least, these traditions are already united in an unlikely “coalition.”

I am referring, of course, to the socialism of a healthy sort. And likewise Christianity of the healthy sort. What is meant by ‘healthy’ here is a subject for books, not essays, and for “eggheads”—the likes of Alasdair MacIntyre, Karl Polanyi, John Milbank—not activists.