Talking Tough to Pakistan Is Not a New Strategy 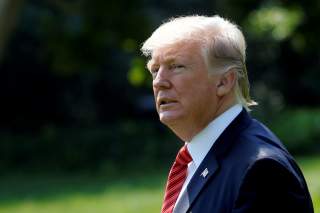 While there are a lot of missing pages in President Donald Trump’s new policy on Afghanistan (how many U.S. troops will be deployed; how much will this all cost; what conditions does he expect the Afghan government to meet?), he couldn't have been clearer on Pakistan. Trump essentially read the Pakistanis the riot act during his address, reminding Americans that the country has sheltered and supported the same terrorist groups that have killed Americans during the course of the war. “But,” Trump said, “that will have to change, and that will change immediately.”

Regardless of what Pakistani military officials say in public and Islamabad’s dismissive attitude to those comments, the truth is that no nation wants to be on the other end of a tougher U.S. policy. Washington has a lot of leverage with a lot of countries around the world, and Pakistan is just as susceptible to America’s long economic reach.

The question, though, is not whether Pakistan would experience pain if the Trump administration significantly decreased military and economic assistance or sanctioned top Pakistani officials for being connected to designated terrorists. The question is whether that pain will be strong enough to push Pakistan where we would like them to go. Based on the last decade and a half of Pakistani foreign policy, Trump shouldn't be surprised in the end if even a complete break in diplomatic relations with Pakistan is insufficient to compel a change in its behavior.

Despite what the Trump administration would like us all to believe, talking tough to the Pakistanis or threatening economic consequences if they don't cut bait with the Afghan Taliban or the Haqqanis is not a new strategy. Nor is it a new goal. Presidents George W. Bush and Barack Obama always wanted the Pakistani military to be more assertive against the terrorist groups and extremist enablers operating, proselytizing, and recruiting on its soil. Sometimes, the Pakistani security forces would arrest a few senior Al Qaeda operatives to shut the Americans up, but a nationwide, systemic campaign against every Pakistani terrorist outfit was never an option. The Inter Services Intelligence Directorate, after all, helped establish many of those groups to begin with to combat the Indians in Kashmir.

As the conflict in Afghanistan wore on, a pervasive feeling hovered over both administrations—and eventually throughout Washington—that Islamabad was either a duplicitous, backstabbing partner playing us for fools or a country whose leadership wasn't willing to sacrifice the political capital required to launch a full-scale and brutal war against jihadists who had the capacity to retaliate. Pervez Musharraf and the army high command preferred to negotiate truces with these groups and warlords rather than fight them in Waziristan.

After seven years of trying to work with Musharraf on Pakistan’s terrorism problem, President Bush’s patience ran out. During the remaining months of his presidency, Bush approved an order authorizing covert U.S. special operations raids on terrorist targets in Pakistan without Islamabad’s advanced permission. By the time Obama left office, the United States tried pretty much everything, from passing a $7.5 billion economic support package for the country and continuing coalition support payments, to cutting back on that support and calling Pakistan out as an exporter of violence. When the Pakistani military did conduct a military operation in the tribal regions—one that would last for two years—the offensive concentrated on militant groups deemed a threat to the state. The Haqqani Network and the Afghan Taliban were either allowed to flee to safer location or were left undisturbed.

No amount of griping from the United States and no amount of cash from the wallets of the American taxpayer have been strong enough or large enough to move Pakistan in the direction of being a full-throated counterterrorism ally—one that doesn't distinguish between useful terrorists and bad terrorists. President Trump may believe he has more tricks up his sleeve and wields the stamina, boldness, and negotiating ability to force Pakistan to stop being two-faced, but forgive us all if we are skeptical. Americans have heard this all before.

Even for a country like the United States, it can be very, very hard to coerce another country to pursue policies that don't serve its interests. Americans may rightly interpret Islamabad's financial and military aid to certain terrorist groups as immoral and unconscionable acts. Indeed, the very idea that a government can label some maniacal terrorists as deserving of aid and others as deserving of death is almost beyond the capacity to understand.

But whether we accept it or not, Pakistan working by, with, and through terrorist groups to put pressure on India; prevent a strategic Indian-Afghan alliance that would encircle Pakistan and impact the region’s balance of power to its disadvantage; and ensure that it possesses influence in Afghan politics has served Islamabad’s policy of strategic depth quite well.

India has been and—pending a peace agreement that nobody seriously believes will happen in the near future—likely will always be the Pakistani security establishment’s top national security priority. In fact, curtailing India is not just a top priority, but an obsession. As long as courting some bad dudes in turbans who hold extremist ideologies helps Pakistan meet that objective, the army and intelligence services will continue to lend these groups shelter and allow them to openly fundraise, recruit and plan attacks from within their borders.

After almost sixteen years of war in Afghanistan, the United States must finally acknowledge that America’s definition of success in Afghanistan is not the same as Pakistan’s. When will Washington stop holding out the slim hope that Pakistani leaders will one day discover their inner-American, align their interests with ours, and do our bidding in a region that is far more important to them than it is to us?