Tammy Duckworth: The Next Vice President of the United States? 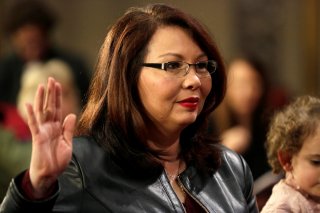 Sen. Tammy Duckworth (D-Ill.) is still in the running for presumptive Democratic nominee Joe Biden’s vice-presidential pick, despite her lack of recognition in the press, as other candidates surface to the national spotlight.

As an American hero and Iraqi War veteran, Duckworth brings a focus on veterans’ affairs to the Democratic ticket, a trait that Biden and his wife both admire.

Duckworth received the Purple Heart and lost both legs while in combat during the Iraq War—making her the only contender with military experience. Despite her intense injuries, Duckworth served for the Illinois National Guard until 2014.

“Anyone who knows him well knows what the United States military means to him,” a confidant close to Biden told The Hill. “And the fact of the matter is, she doesn’t just check the boxes, she has an incredible story and it represents not only who the vice president is at his core but the narrative he's been talking about since his campaign began.”

The Illinois Democrat formed a relationship with Biden’s wife, Jill, when she worked under the Obama administration in the Department of Veterans Affairs as an assistant secretary. During her time in this position, the Bidens and Duckworth convened on a number of issues, especially relating to homeless veterans.

In 2012, when Duckworth won a Chicago House seat, she worked with Jill on more veteran protection issues.

Duckworth also introduced Beau—Biden’s son who died of cancer and a member of the Delaware National Guard—at the Democratic National Convention in 2008.

Advocates of Duckworth’s candidacy also mention her early life as her family was once on food stamps. If chosen as vice president, Duckworth could rally support from voters who’ve also experienced what it’s like to be on food stamps, as she is a relatable candidate to poorer and less privileged communities.

She “has one of the most extraordinary stories in politics,” David Axelrod, a political strategist and former adviser to President Barack Obama, told the Chicago Sun-Times. “Obviously it’s a heroic story, but it’s also an incredible story of resilience and perseverance, of patriotism and about empathy. It’s the stuff of movies, it’s the stuff of novels, her life story, and there are not too many people like that around.”

The senator emerged into the national spotlight in recent weeks after Fox News host, Tucker Carlson, criticized her for considering removing statues of George Washington. Duckworth had told CNN she was open-minded about taking Washington’s monuments down but never adamantly said it.

Carlson said she is a Democrat who “hate[s] America” and referred to her as a “coward,” proposing questions about her patriotism.

Duckworth quickly responded to Carlson’s comments via Twitter, “Does @TuckerCarlson want to walk a mile in my legs and then tell me whether or not I love America?”

As the presidential election approaches, Biden has seen spikes in support across the country. To secure the presidency and gain more voter support, Biden has sought to rally votes from key swing states, and Illinois isn’t one of them.

The state has been blue for multiple past elections, making Duckworth a candidate who can’t really swing an entire election or a group of voters.

Strategists have speculated how much more Democratic and moderate support Duckworth would gather if chosen as Biden’s running mate.