A Tangled Web of Corruption Is Strangling Moldova 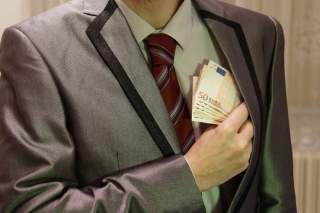 Until few years ago Moldova, a small country nestled between Romania and Ukraine, was predominantly Western-oriented. Sadly, this support for Euro-Atlantic integration is quickly fading.

To some degree, this is the fault of the current Moldovan political leadership. If the country turns away from the West in the October’s presidential elections, it will be because of their handiwork.

This could easily happen. If the most recent International Republican Institute poll is right, Igor Dodon, a pro-Russian socialist, is poised to win.

Of all the countries of the former Soviet Union, Moldova probably suffers most from endemic corruption and economic turmoil. This double affliction has led to the rise of oligarchs who run the country without being held accountable to the voters.

Perhaps the top oligarch running the show from behind the scenes is Vladimir Plahotniuc, Moldova’s richest man. He currently serves as vice-chairman of the ruling Democratic Party, but that mundane title masks his true hand in Moldovan affairs. In a report on U.S. Assistant Secretary of State Victoria Nuland’s controversial meeting with Plahotniuc, The New York Times describes him as “Moldova’s most-feared figure,” a man with a politically “toxic” reputation.

Tellingly, former Moldovan prime minister Iurie Leanca, thought to be a Plahotniuc ally, said that the State Department was right to meet with Mr. Plahotniuc because “They talk with the people with real power all over the world…And he is the person with the real power in this country.”

Moldova’s oligarchs have been robbing the country blind. Exhibit A is “the theft of the century,” a kleptocratic foray that has bankrupted three large Moldovan banks, plundered National Bank reserves and left $1 billion “missing.”

The theft was mind-boggling: After gaining a majority control stake in three major commercial banks by unscrupulous means, corrupt oligarchs instructed loans to be made to fake companies owned by people whose identities remain veiled in a maze of offshore corporations.

The money promptly disappeared to offshore havens, as well as to the United States, EU and the UK. According to whistleblowers now in the West, Moldovan judges and prosecutors were involved. So were senior politicians.

After so much money “disappeared,” the National Bank of Moldova stepped in, injecting hundreds of millions of dollars into the conspiring commercial banks to keep them afloat. The process was then repeated.

Unbelievably, the National Bank reserves used to prop up the commercial banks came, in part, from a $1 billion tranche from the IMF. This means that U.S. and European taxpayers are on the hook for part of the “theft of the century.”

The tangled web of those who have been, or are thought to have been, involved keeps growing. Former prime minister Vladimir Filat and his sidekick the banker Ilan Shor are currently in jail for their connection to the “missing” billion dollars. It remains to be seen what exact role Mr. Plahotniuc had in the “theft of the century” or other money laundering schemes. But U.S. law enforcement authorities, the UK Parliament, Romanian security services and the Interpol have started to ask questions— not just about Moldovan politicians, but also their former counterparts in neighboring Romania.

Late July, a new twist to this Eastern European House of Cards plot occurred in Ukraine when Moldovan businessman Veaceslav Platon, who had Ukrainian citizenship since 2004, was arrested in Kyiv immediately after Moldova’s Prosecutor General's Office submitted a request to extradite him back to Moldova. The timing was curious, as it has been reported that Mr. Platon was going to cooperate with the United States and release information on the money trail left behind by his former business partner—Vladimir Plahotniuc.

If this abuse of legal procedure of the Ukrainian law enforcement was the behind-the-scenes work of Mr. Plahotniuc's allies in the Moldovan prosecutor's office and in Ukrainian government, it would show how much control this oligarch has.

Around the same time that Mr. Platon was being arrested in Ukraine, Russian police raided the house of Andrey Belyaninov, the former head of Russia’s Federal Customs Service (who also served with President Putin in East Germany and was part of Putin's inner circle) and the home of Sergei Lobanov, a former close advisor to Belyaninov. It was a big payday for the anticorruption investigation: the cops seized more than $850,000 in cash from Belyaninov’s mansion.

How does this all connect back to Moldova? Mr. Lobanov owns 39 percent of Victoriabank, one of Moldova’s largest banks, which he bought from Mr. Platon. It is worth noting that the majority owner of Victoriabank is one Vladimir Plahotniuc.

When it comes to corruption in Moldova, a connection to Russia is never far away. Russian officials, organized crime leaders and, terrorists and corrupt officials have used the country as one big money laundromat for years. The Organized Crime and Corruption Reporting Project (OCCRP) claims that in total, $20 billion has been laundered from Russia through Moldova. This makes Moldova even more vulnerable to Russian influence.

If the West is truly committed to a Europe that is whole, free and at peace, it can no longer ignore countries like Moldova.

Some opposition Moldovan politicians are trying to save the reputation of their country. For example, Andrei Nastase, a presidential candidate for the “Dignity and Truth Platform Party,” recently visited Washington and called for active Western involvement in his country's civic renewal and anticorruption efforts.

Western law enforcement and international financial institutions need to improve cooperation to hold accountable those who have ripped off the Moldovan people—and U.S. and European taxpayers, as well. Bad actors on both sides of the Atlantic must be brought to justice, regardless of their wealth and status.

Luke Coffey is the director of The Heritage Foundation’s Allison Center for Foreign Policy Studies (heritage.org).

Image: A man in a suit putting money in his pocket. Public domain photo by Kiwiev.