Tanking Together: Why Biden and Trump are Both Underwater 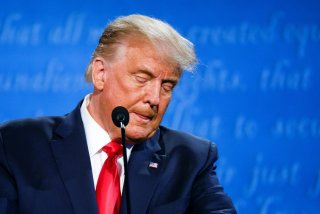 Even by today’s grotesque political standards, Joe Biden and Donald Trump are strange bedfellows indeed. Yet there they are—the tired old liberal hack from Delaware and the blustering, bullying billionaire bumpkin from Queens—tanking together in a spectacularly bipartisan political collapse. You might call it the “Biden-Trump Slump.”

Most current polling qualifies both the sitting Democratic president and his Republican predecessor as what The Donald would describe as “loo-sahs.” Despite approaching politics from opposite entry points, this seemingly disparate duo may be drifting toward a common destination: oblivion.

Why? Perhaps because, for all their differences, both men represent dead ends to an American electorate sick and tired of both the tone and the content of “politics as usual” as conducted today. No one can lower the tone of a political debate quite like Trump can, and no recent administration has come close to Biden’s bad content. From day one in office, Team Biden has ruthlessly but clumsily pursued a ruinously radical domestic agenda and disastrous foreign and immigration policies in what can only be described as a tragedy of errors, from the economy to crime, from Afghanistan to the Rio Grande.

But while the country and most Republican and conservative officeholders and opinion leaders have focused on present and future policy battles, Trump still spends most of his time with his eyes—not to mention his mouth—focused firmly on the past. His continuous “I was robbed” litany may still raise the hackles of fanatic fans, but most people, including most Republican and right-leaning independent voters like myself who narrowly elected Trump in 2016 and voted for him again in 2020 as the lesser of two evils—are getting sick and tired of his self-centered, backward-looking sound loop.

That trend is showing up in the polls. In the most recent Pew Research Center figures, gathered in mid-September, 54 percent of Republicans and Republican-leaning independents don’t want Trump to be the Republican nominee in 2024 and 32 percent of them don’t even want him to play a major political role in the future. What this tells us is that since the election and the subsequent riot at the Capitol, even a majority of Trump’s political base is now looking elsewhere for leadership.

Meanwhile, the electorate as a whole, which narrowly and often reluctantly went for Biden in 2020—mainly out of aversion to Trump—is beginning to suffer from buyer’s remorse. According to Eli Yokley, a senior reporter with Morning Consult, the international opinion and intelligence analysis service, four in ten voters now “say Biden has accomplished less than they expected since taking office.” That, as reported in the Washington Times, is up twelve points since June. Following that trend, “independent and Democratic voters who say Biden has underperformed expectations have doubled in the past three months,” while 52 percent of all voters disapprove of Biden’s job performance, “his worst rating in a Morning Consult/Politico poll so far.”

So there we are. The electorate as a whole seems to be turning against the Biden presidency (and the Schumer-Pelosi-led Congressional agenda). Simultaneously, a majority of Trump’s own base would rather not see him run again.

Welcome to the Biden-Trump Slump.

Aram Bakshian Jr., a contributing editor at the National Interest, served as an aide to Presidents Nixon, Ford, and Reagan and writes frequently on politics, history, and the humanities.