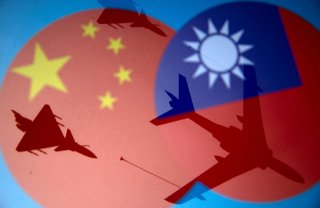 On the eve of President Joe Biden’s unofficial delegation arrived in the self-governed nation of Taiwan, in mid-April 2021, the Chinese military began live-fire drills in waters off the island’s southwest coast for the duration of the visit. China also sent a “record number” of twenty-five military aircraft—including fighters and nuclear-capable bombers—over the island’s Air Defense Identification Zone (ADIZ) on the first day.

When the United States switched its diplomatic recognition from Taipei to Beijing in 1979, the U.S. Congress also enacted the Taiwan Relations Act, in which deterrence would be achieved by a policy of “strategic ambiguity.” However, current U.S.-China tensions have risen to an unprecedented scale, which now appears to be drifting away from the forty-two-year-old policy of peaceful co-existence.

Beijing continues to assert itself aggressively not only around Taiwan but also around the Philippines and Vietnam in the South China Sea as well as Japan’s southern island chain around the Senkaku (Diaoyu) islands in the East China Sea. Many nations in the Indo-Pacific region and around the world now question whether the United States has either the will or the means to respond should China decide to invade Taiwan.

Indeed, the security interests of the United States and Taiwan are virtually impossible to decouple given their ideological and historical legacies. The Biden White House will have to respond, militarily if necessary, to preserve American credibility and its founding vision and democratic values. In his first global message in February 2021, Biden assured the world that “America is back” after the tumultuous four years of the Trump administration.

With its explosive economic growth in the decades after market liberalization, China has enabled the Communist Party of China (CPC) to become more assertive in its geopolitical posture. It has allowed the CPC to now seriously contemplate a forced unification with Taiwan. This is a well-known historical objective of the post–World War II milieu, according to a declassified CIA National Intelligence Estimate in 1951, in which Beijing’s objective is “eliminating Nationalist Chinese [i.e., Kuomintang in Taiwan] and Western power from China and contiguous territories as rapidly as possible” and aiming at “the final victory of world communism and at Chinese leadership of a Communist Far East” with the support of the Soviet Union.

These objectives have not changed. For Beijing, it is an emotional saga that the ideological conflict has remained the “greatest unresolved legacy” since the founding of the People’s Republic of China in 1949. The CPC believes it is time to bring this issue to closure once and for all. It is also personal for President Xi Jinping who is determined to bring to fruition what Chairman Mao Zedong had envisioned in a “unified” China. At the beginning of his second term, Xi reminded thousands of delegates to the 19th Party Congress in 2017 when he said, “Don’t forget the original intention. Stick to the mission.”

This vision is an integral part of Xi’s “rejuvenation of China” agenda, whose mission is carried out through his ambitious Belt and Road Initiative. Indeed, the CPC General Secretary Xi is deemed a “closet Maoist” who is reviving many of Mao’s “norms and ambitions with gusto.” Thus, it is urgent that as the People’s Republic of China approaches its centennial in October 2049 (and as China celebrates the founding of CPC in July 2021), the unification of greater China will not only be Xi’s crowning achievement to cement his legacy as the great unifier but also to represent the apotheosis of Chinese history.

U.S. leadership under former President Donald Trump over the past four years have led Beijing—as well as other countries—to conclude that America is in “irreversible decline.” Despite Biden’s victory in the 2020 election, the American electorate is still riven by nationalistic populism. Many others have even questioned whether the United States is still the “indispensable nation.”

Thus, Beijing has concluded that China’s time has now come to pursue its original objective: Taiwan. Since 2013, China has engaged in fortifying and militarizing twenty outposts in the Paracel Islands and seven in the Spratly Islands in the South China Sea and aggressively intruded on the ADIZs of Japan and Taiwan. Most recently, China has been gathering its maritime militia at Whitsun Reef in the Spratly archipelagoes under the pretext of inclement weather—despite the apparent absence of any such meteorological conditions. These are the predicates of seizing Taiwan.

Heretofore, U.S.-China policy with respect to Taiwan had been guided by a policy of strategic ambiguity. Prior to the departure of the Trump administration, however, strategic ambiguity became less ambiguous when the National Security Council released its declassified Strategic Framework for the Indo-Pacific region. The timing of the release of the document is particularly noteworthy. It suggests that the purpose of Trump White House was to commit the Biden administration to a continuation of Trump’s Taiwan policy. In fact, the framework is no more than a restatement of the obvious because the security of Taiwan is inextricably tied to America’s own security interests in the Western Pacific and Asia for three primary reasons.

First, one of the objectives of the framework would be to deter China from the use of military force against the United States and any allies or partners. It would not only deny China’s air and sea dominance within the First Island Chain in a conflict but would also defend nations within this island chain as well as controlling all domains beyond the first chain of islands from Japan to Indonesia. The framework is designed to deny China’s ability to project power beyond the First Island Chain. It would likely mean that China has control of the South China Sea, seized Taiwan, and it is now able to use the island as a point of departure. In a top-secret memo in 1950, Army Gen. Douglass MacArthur had described the island as an “unsinkable aircraft carrier” for Washington. The memo emphasized “the importance of denying Formosa [Taiwan] to the Communists” to project power out into the Western Pacific and directly threaten the United States.

Second, as just as the Chinese communists have a historical tie to Generalissimo Chiang Kai-shek’s Nationalists, so too does the United States. But unlike the atheistic communists, the Republic of China in the 1930s and 1940s under the Kuomintang Party was far more aligned with the American vision of a future China. Chiang was also a convert to Christianity who, along with his American-educated Christian wife Soong Mei-ling, were seen as the very validation for the generations of American missionaries who had gone to China to save Chinese souls. That ideological and religious alignment in “promoting joint values” remains to this day.

The third and most paramount reason is America’s long-term credibility. The defense of Taiwan is a far greater issue than simply the defense of a democratic partner and ally. As Biden has asserted in his Interim National Security Strategic Guidance, it is a “historic and fundamental debate about the future direction of our world” and whether or not autocracy is the way of the future; a system that former President Trump has remarked that he would like to “give that a shot someday.”

It would not be an overstatement to suggest that America’s credibility declined significantly during the Trump administration. From alienating our closest friends and allies abroad to the mishandling of America’s myriad domestic issues, including the coronavirus pandemic, many leaders around the world are wondering if perhaps the “China model” isn’t a more effective system of governance for them. Indeed, China’s V-shaped economic recovery from the pandemic has given Xi’s numerous opportunities to promote his “socialism with Chinese characteristics” model of governance.

America’s Asian allies and partners no doubt appreciate Biden’s announcement that “America is back.” Yet, these Asian nations are loathed to “pick sides” because ultimately, they are the ones that must deal with Beijing’s coercive diplomacy on a daily basis—irrespective of whether “America is back” or not. For them, there is no guarantee that the United States will be there in eight or even four years from now.

The Biden team now has a monumental task in rebuilding the trust and confidence lost. Part and parcel of that must be a sustained and enduring commitment of support for Asian allies and partners that transcends domestic politics. Maintaining a free and open Indo-Pacific region means the United States must not only strengthen and expand the Quad Alliance with Australia, India, and Japan—but also re-engage with the Indo-Pacific region countries diplomatically with defense enhancements to send a clear and unambiguous strategic message to Beijing that the perceived costs to China would be exceedingly high. It is “a delicate balancing act,” as Brian Atwood, an original architect of the Taiwan Relations Act of 1979 at the State Department, has recently argued. As the governing “strategic ambiguity” has lost its deterrent value, Atwood has now maintained that “abandoning an impressive Asian democracy, whether sovereign or not, is not an attractive option” for the United States.