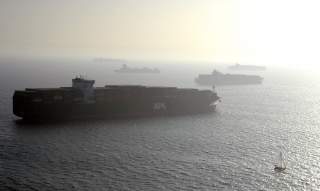 The wise American policy architects of the Cold War who successfully walled-in the expansionist Communist Soviet Union behind its Iron Curtain didn’t need any tariffs in their tool kit. The only thing the USSR exported in any quantity was tyranny. Like their other products, it was an inferior good—dangerous and destabilizing.

To maintain and promote a stable and prosperous postwar world, America contained and pushed back against Moscow by leading the West in building and maintaining a robust international institutional infrastructure for policy coordination and dispute resolution.

To wage the hot peace of the twenty-first century against a newly expansionist Communist China, however, the United States must develop another tariff-free menu of options for an increasingly interconnected world that is extremely allergic to trade wars. The mid-twentieth century containment strategy should be the Trump administration’s model.

Communism in practice has always failed. To stay in power amid the inevitable economic ruination it produces, the Soviet Union’s fascistic leaders grabbed land from neighboring territories and projected power at key geostrategic points around the globe. The goal was to ensure cheap imports of food and commodities from vanquished neighbors and to stoke Russian nationalism at home and fear among their foreign enemies.

Chinese products are far superior to Soviet ones, but only because a generation of pragmatic leaders in Beijing were willing to honor the principles of Marxist-Leninism in the breach—averting their eyes from the animal spirits of the efficient private actors who drove the economy and tolerating enormous corruption to allow them to use state assets to turn a profit.

Beijing has also had to prop up heavily indebted and inefficient—but job-creating—state-owned enterprises. The social costs of the Chinese regime’s hypocrisy are growing, as resentment of massive corruption and waste builds and undermines its legitimacy.

Let’s not kid ourselves, then. Behind the placid and confident façade of wannabe Chinese president-for-life Xi Jinping lurks a Communist Party of China that is increasingly anxious, bedeviled by the same worries that confronted first Stalin and now Putin. The self-contradictory hybrid of mutually exclusive governing philosophies—capitalism in practice but communism in theory—is simply not tenable in the long term. But Xi and his large cohort of party faithful want to cling to their power and ill-gotten gains, so they have doubled down on communism, re-branding it as “Socialism with Chinese Characteristics for a New Era.”

The social contract that Emperor Xi struck this year with his subjects is pretty simple: in exchange for their consent to his unlimited hold on authoritarian power, they get “China 2025,” which is a blueprint for China to become a global leader in the cutting-edge technologies that will define future American economic and military power (e.g. aircraft fabrication, robotics, semiconductors, electric vehicles, biotechnology, artificial intelligence and quantum computing).

The promise of China 2025 slakes the Chinese people’s historic appetite for international prestige. But to make good on that promise, Beijing must continue doing what it has done for years: engage in cyber-theft of intellectual property and unfair trade and investment practices that force U.S. companies to transfer their proprietary technology.

President Trump has diagnosed this threat correctly. But he must recalibrate his policy response so that it inflicts punishment on China’s leadership and without penalizing American workers, farmers, and consumers.

Instead of implementing his initial response—a slew of counterproductive and economically destructive tariffs—the president should consider pursuing a tariff-free containment strategy.

For example, the White House could wage an aggressive campaign at the International Monetary Fund, the World Bank, the global regional development banks (e.g. the Asian and Inter-American Development Banks), and other international financial institutions to penalize unfair Chinese practices.

This could begin with President Trump directing U.S. Executive Director-designate Mark Rosen to commission IMF-led audits of the one-sided, nontransparent loans China has made to strategically located developing countries as part of its “Belt & Road Initiative.” Critics of BRI argue persuasively that these loans are structured to set those countries up to fail, which will allow the Chinese to declare them in default and move in to take ownership of vital assets such as ports, railroads, and airports.

The United States should then use its power to impose loan conditionality on any unrepentant BRI beneficiary countries that refuse to renegotiate their BRI loans if IMF audits expose their flaws.

America should also work with democratic, like-minded, and free-market member countries of the World Trade Organization that benefit from robust rule of law to use their own court systems to impose and enforce their own, tougher and quicker sanctions on China when the WTO finds China guilty of engaging in unfair and illegal trade practices.

These steps would be in addition to some excellent actions already taken by the White House and Congress, including more aggressive challenges of Chinese intellectual property practices under the WTO’s Agreement on Trade-Related Aspects of Intellectual Property Rights and through the Committee on Foreign Investment in the United States (CFIUS).

Despite’s Xi’s outward bravado, China has serious problems. It would be quite vulnerable to these pressure tactics. And while this tariff-free menu might cause indigestion in Beijing, it would improve the health of the U.S. economy and avoid the risks it currently faces from a trade war.

James M. Roberts is research fellow for economic freedom and growth in The Heritage Foundation’s Center for International Trade and Economics.

Image: Ships gather off the ports of Los Angeles and Long Beach, California as a sailboat makes it way past them in this aerial photo taken February 6, 2015. The loading and unloading of cargo freighters has been suspended at all 29 U.S. West Coast ports this weekend because of chronic slowdowns on the docks that shippers and terminal operators have blamed on the dockworkers' union, the companies said Friday. Picture taken February 6, 2015 REUTERS/Bob Riha Jr