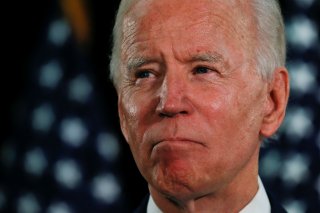 Joe Biden is not much present in the media these days, however, when he is, one is forced to ask: If you cannot run your basement, then can you run a country? After the pandemic began spreading around the United States, Biden’s staff members took their time turning a recreation room in the basement of his home into a studio. Late in March, this project—which should not be particularly challenging for a team that is marshaling a national campaign for the presidency of the United States—was still very much a work in progress. The same, we learn, is still true in May.

During a conference call with reporters on March 20, Biden announced: “They tell me there’s ways in which we can do teleconferencing via us all being in different locations. The bottom line is that everything from providing better access to where I physically live and be able to broadcast from there as well as our headquarters is underway.” Now, this is headline-making news. Biden tried to reassure us by stating, “We’ve hired a professional team to do that now. And if you excuse the expression, it’s a little above my pay grade how to do that. But that’s desperately what we’re trying to do because I want to be in daily or at least, you know, significant contact with the American people.”

This was not the first or second time that Biden has fumbled forward. Despite Biden’s wealth of experience with campaigning, he is slow to react, has no effective war room, and his responses to President Donald Trump are often feeble. Thus, after Trump started referring to Biden as “Sleepy Joe,” it took Biden several news cycles to respond, and he chose to call Trump “a clown,” which is what you call a harmless entertaining figure. When Trump stated that, compared to Joe Biden, “I just feel like a young man. I’m so young. I can’t believe it . . . I’m a young vibrant man.” To this, Biden responded with “If he looks young and vibrant compared to me, I should probably go home.”

Recently, much was made about the fact that Biden had to apologize when he told a black man that if he did not vote for him, he was not black. Well, what do you make about the following? Linda Hirshman wrote, “I believe Tara Reade. I’m voting for Joe Biden anyway.” Biden, instead of letting his staff share this op-ed with one and all, stated “If they believe Tara Reade, they probably shouldn't vote for me.”

On March 13, Biden held his first virtual town hall event, replacing a canceled Chicago rally. CNN called it “a technical calamity” and noted that it involved “[t]echnical glitch after technical glitch.” The event did not begin until fifteen minutes after its scheduled start time, even after the campaign moved the start time to make it two hours later than initially planned. When it finally began, those tuning in via Zoom were unable to see a visual of Sen. Dick Durbin (D-Illinois), who introduced the former vice president. When Biden appeared, his audio broke up so much that his comments were unintelligible. During the question-and-answer portion of the event, the first person called upon said, “Mr. Biden’s speech was garbly [sic] the entire time.” The next person who was called upon never spoke up, seeming to have left the call, which the Biden team did not note. As the next two questioners began their queries, Biden inquired, “Am I live?” and “Am I on camera?” A few days later, Biden’s March 17 primary-night speech, filmed at his home. It featured a “poorly lit backdrop and grainy footage,” which, according to the Washington Post, “made even some of his supporters wince and compare it to a hostage video.”

Some technological glitches and challenges are to be expected and are understandable, especially during the early transition to remote campaigning. However, the Biden campaign’s virtual issues have continued, two months later, into May. His campaign held its first virtual rally on May 7, targeting voters in the battleground state of Florida. By some accounts it was an “unmitigated technological failure.” The Guardian reported that “[t]he video stream was glitchy and pixelated. The audio was choppy, rendering some remarks nearly incomprehensible. And there were lengthy delays between speakers and at one point, the feed went dark for several minutes.”

I spend my evenings watching the news on PBS. Biden was interviewed in his open backyard but I had a hard time following because of a chorus of crickets drowning out his words. Meanwhile, Antony Blinken, senior foreign policy advisor to Biden, looked like a zombie, illuminated by garish white light, in sharp contrast to a well-presented Trump supporter from a small think tank.

Fast forward and there has been little change.  According to the New York Times, as of May 13 “interviews with more than two dozen donors, advisers, activists and party strategists portray an operation that is exhibiting . . . slow decisionmaking processes and multiple power centers across Mr. Biden’s sprawling political network, generational differences between some longtime Biden advisers and younger operatives, inadequate staffing and a tendency to be reactive in the face of controversy.”

Several of these problems have been corrected in recent days. On June 2, Biden delivered the kind of speech one would hope a national leader to deliver. However, a new problem has received attention. His campaign manager is white. His chief strategist is white. His three chiefs of staff as vice president and four of the five people who have been deputy campaign managers are white, as are the leaders of his economic team, according to a recent report in the New York Times.

That said, if Biden becomes the Democratic party’s presidential nominee as expected, then I will vote for him even if he goes on Fifth Avenue and shoots someone, to draw on Trump’s loyalty test. I would do so because if Trump is reelected, then his capricious mismanagement of the response to the pandemic will cost many more lives. However, as Biden is fond of saying, “come on.” Is there no one among the many Democratic movie stars and Hollywood moguls who can get Biden a top-of-the-line studio? And can his supporters in Silicon Valley not get him the tech support necessary so he can work his Zoom as if it is within his paygrade level?