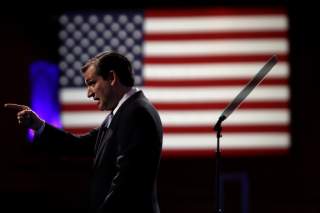 Donald Trump, Sarah Palin and Ted Cruz all went to Iowa. This is not the set-up of a joke, but the beginning of the 2016 presidential race.

All three are conservative celebrities; the first two are celebrities even in the broader sense. Having any of them at your conservative gathering excites attendees and generates media attention. All three say they are mulling runs for the White House.

Cruz is obviously different from Trump and Palin in many important ways. The senator from Texas is a current officeholder. Trump has never been elected dog catcher, and Palin is a long way from her days as governor of Alaska.

Cruz's appearance at the Iowa Freedom Summit received rave reviews, while Palin's was widely panned. In fact, the 2008 vice-presidential nominee is being criticized in conservative circles in ways that once seemed unthinkable.

But Cruz does share one problem with Palin and Trump. Mama Grizzly and the eccentric billionaire are able to exert some influence over the process by threatening to run, but if either of them took the plunge and did poorly, it would hurt their reputations as people who represent grassroots conservatives.

George W. Bush was quoted dismissing the conservative movement by saying, "I whupped Gary Bauer's ass in 2000." Bauer is still an important conservative activist, but his ill-fated presidential campaign definitely made him seem less representative of the religious right.

Cruz is still a freshman senator. A lot of his influence in that chamber stems from the perception that he speaks for a lot of conservatives. But he clearly doesn't want to stick around as long as past conservative boat-rockers like Jesse Helms, nor does he want to drop out of electoral politics like Jim DeMint or Tom Coburn.

Lots of Republicans, and even many conservatives, disagreed with Cruz's defund-Obamacare strategy. This was especially the case after the government shutdown briefly turned public opinion against the GOP. But large segments of the conservative base appreciated that Cruz was fighting for them at a time when so many other GOP leaders seemed ready to fold.

When Cruz looks at 2016, he likely thinks of two other presidential elections. One is 1980. Ronald Reagan bonded with conservative activists during the fight against the Panama Canal treaty. Republican leaders like Howard Baker and even eminent conservatives like William F. Buckley, Jr. thought Reagan was wrong. He also failed to stop the treaty.

Reagan was nevertheless the conservative movement's choice and a two-term Republican president of the United States. He is still revered on the right to this day and is now grudgingly accepted by some liberals in the pantheon of great 20th-century presidents.

The other election Cruz is looking at is 2004. Bush's reelection campaign team concentrated on turning out the conservative base, rather than fighting John Kerry for a small slice of independent voters. The election was close, but their bet paid off.

Cruz is a purer conservative than Bush, a president whose legacy included the Medicare prescription-drug benefit and No Child Left Behind. But he has to get to the general election before he can try to replicate Karl Rove's fall campaign strategy.

The big question for Cruz is whether he has the state-by-state organization to go the distance. Currently, most observers suspect the answer is no. But perhaps he can build one on the fly.

To win the nomination, Cruz will not only have to battle establishment heavyweights like Jeb Bush, Chris Christie and Mitt Romney (should they all run), but he's also likely going to have to emerge from a crowded field of conservatives that may include Rand Paul, Marco Rubio, Scott Walker, Mike Pence, Bobby Jindal, Ben Carson and who knows how many other people as the year progresses.

Some of those potential candidates have supporters and donors that will overlap with Cruz's. Can the Texas senator not only bring crowds in Iowa to their feet, but also win over the financial backers and campaign professionals he'll need to help him translate the applause into votes? What happens to Cruz's reputation as a conservative dynamo if he can't?

Ted Cruz may be willing to take that risk.