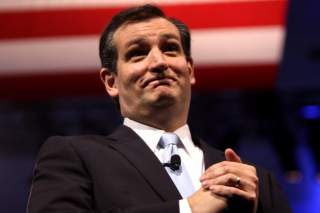 Texas senator Ted Cruz is one of the more interesting of the potential 2016 Republican nominees. He’s an Ivy Leaguer who enjoys strong support from the Tea Party. He was a collegiate debate champion, yet his most famous public appearance saw him reading Dr. Seuss’s Green Eggs and Ham on the Senate floor. And he’s consciously trying to beat a new path for the GOP on foreign policy, explicitly stating that he’s “somewhere in between” the party’s hawkish and dovish wings, and arguing he draws lessons from both. It’s hard not to see political tactics here: in a presidential primary, Cruz would be competing with Rand Paul for Tea Party votes and thus needs to distinguish himself from the Kentucky senator. Taking a more aggressive line on foreign policy than Sen. Paul is probably the least risky way to do that—it makes him more palatable to the Republican establishment, and it’s unlikely to cost him many primary votes. Cruz’s new direction might be good politics. But is it conservative?

The Ted Cruz foreign-policy approach appears to have two distinctive features: an increased emphasis on moral leadership, particularly on matters of human rights, and a decreased emphasis on nation building. Cruz, writes the Daily Beast’s Eli Lake, “is an American exceptionalist who is wary of remaking the world in America’s exceptional image.” Cruz’s words to Lake: “It’s not the job of the U.S. military to do nation building or produce democratic utopias.”

This comes out in his critique of the Obama administration’s quick abandonment of Egypt’s Hosni Mubarak: “His human-rights record was not good, we had a responsibility to speak out against it,” but Obama “went further than that to topple him and replace him with the Muslim Brotherhood, whose interest and animus was rabidly anti-American.” Cruz is right: the fall of Mubarak accomplished nothing more than a few years of chaos: Egypt is once again a military autocracy, only this time with more volatile politics. Obama pushed Tahrir Square; Egypt paid the price.

Lake suggests that this approach echoes Ronald Reagan. In Reagan’s time, there were many Mubaraks. America supported anti-Communist dictators from South America to Seoul. But Reagan also saw Soviet abuses as a point he could attack, and had watched Jimmy Carter’s quick criticism of autocratic allies produce a new Soviet client state (in Nicaragua) and undermine a key pillar of American policy in the Middle East (in Iran). How could we speak up for human rights without setting back our national interests? Reagan squared this circle with the help of Jeane Kirkpatrick, his ambassador to the United Nations. Kirkpatrick had written an article in a 1979 issue of the influential neoconservative journal Commentary which suggested that not all autocracies are equal, that “although there is no instance of a revolutionary ‘socialist’ or Communist society being democratized, right-wing autocracies do sometimes evolve into democracies–given time, propitious economic, social, and political circumstances, talented leaders, and a strong indigenous demand for representative government.”

In other words, abuses by America’s autocratic allies, provided they were preventing the spread of Communism, existed in a different moral category than abuses by America’s Communist enemies. A lesser evil. History seems to have proven Kirkpatrick right. Pinochet’s Chile became democratic and prosperous; Castro’s Cuba is now Castro’s brother’s Cuba. South Korea gave up its military dictators; North Korea built concentration camps. Greece had a much smoother transition to democracy than its neighbors in the former Yugoslavia. Places where America, under Carter, pushed for friendly autocracies to change—like Iran, for example—have not fared as well.

It’s quite reasonable, then, that Cruz’s national-security adviser Victoria Coates has interns read the Kirkpatrick essay. Yet so many of Kirkpatrick’s points—and so much of Reagan’s foreign policy—rested on the existence of a massive, organized, global and well-funded threat: the Soviet Union. No such threat exists today. China acts more like a traditional great power; Russia is an economic and geopolitical husk of its former self; radical Islam is dangerous but lacks the resources and the internal order to present a true systemic threat. Revolutionary autocracies like those Kirkpatrick decried are all but nonexistent. Even the world’s last really revolutionary state, Iran, has personalistic internal politics that look a lot like the traditional autocracies with which Kirkpatrick thought we could do business.

Yet Cruz, his advisers and his interns can still look to Kirkpatrick for advice. In the fall of 1990, as the “evil empire” of Communism was collapsing on itself, Kirkpatrick wrote here in the pages of The National Interest about what America’s purpose in the world would be after the Soviet fall. Like Cruz, she sees a place for morality in American foreign policy. Encouraging democracy, she argued, “is enormously desirable...Democratic institutions are not only the best guarantee that a government will respect the rights of its citizens, they are the best guarantee that a country will not engage in aggressive wars.” Yet she was very careful to bound this claim: “It is not the American purpose to establish ‘universal dominance’...not even the universal dominance of democracy....It is not within the United States’ power to democratize the world.” With this in mind, America “should not seek to manage the political evolution of the Soviet Union,” because “it is a large, sovereign country, very different from our own, with whom we have no special influence, and in which we have no special interest (except as a military threat).”

Instead, suggested Kirkpatrick, America’s task was to figure out how to become “a normal country in a normal time...to give up the dubious benefits of superpower status” and focus on forming a more perfect union at home. “One of the most important consequences of the half-century of war and Cold War has been to give foreign affairs an unnatural importance. The end of the Cold War frees time, attention, and resources for American needs. America’s chief collective purpose should be to make a good society better.”

This might have a whiff of progressivism, of Obama’s “nation building at home.” Yet it’s rooted in a deep conservatism, a true, philosophical conservatism that is skeptical of grand ideological designs, whether at home or abroad. America should support human rights and democracy, but it is not tasked with vindicating them. “There is no mystical American ‘mission’ or purposes to be ‘found’ independently of the U.S. Constitution and government,” writes Kirkpatrick. “Our purposes in the world are merely human, not transcendental.” (“Merely human, not transcendental” might as well be a motto for all authentic conservatism since 1789.)

And Kirkpatrick’s Commentary essay draws from the same conservative roots: she repeatedly acknowledges the long, difficult, halting path that has characterized the emergence and evolution of democracy in the West, and criticizes the progressive (and neoconservative) view that history has a direction, and a positive direction at that, and that the government should be “a ‘midwife’ to history” as democracies readily form “anytime, anywhere, under any circumstances.”

Does Cruz’s actions hold to Kirkpatrick’s conservative vision? Is it as pragmatic as his disavowal of using the military to “produce democratic utopias” or his proclamation that his foreign policy “is not the simplistic version...that if the United States stands up and speaks on human rights, it means we cannot deal with another nation”?

Hardly. Cruz does not hold to these conservative ideals in practice. He has, for example, been a leading voice in favor of freezing the Iran nuclear talks, in part on human-rights grounds. How different from the “simplistic version” of human rights in foreign policy is his proclamation that “there should be no further discussion while [Americans held in Iran] are languishing in prison,” or his complaint that “some in the Obama administration believe human rights issues can be compartmentalized, or rather marginalized, in their quest to get a comprehensive deal on Iran's nuclear program”?

Cruz has suggested that another precondition on the Iran talks should have been an Iranian affirmation of “Israel's right to exist as a Jewish state.” There is not even a hint of pragmatism in that, for it would be holding Iran to a standard to which we do not even hold our Arab allies, who “expressed full rejection” of this formulation in the declaration of the Arab League summit this March. We still arm them and even base troops on their territory, yet we cannot even talk with Iran?

And Cruz’s approach to the Ukraine crisis seems to be similarly “transcendental”: his speeches offer no evidence that he sees anything other than ideals (self-determination, democracy, etc.) at play there. He seems to see no strategic risk, no unforeseen consequences, if Ukraine “is allowed to be free, allowed to join the West, allowed to be an ally and stand with the United States.” Contrast this view of alliances with Kirkpatrick’s as the Cold War drew to a close: Most of our anti-Soviet alliances “are now outdated”; those that remain “should be alliances of equals, with equal risks, burdens, and responsibilities.” A Western-aligned Ukraine certainly couldn’t bear equal burdens—it was a poor, corrupt and disorganized country even before the recent chaos. The risks (and the gains) aren’t equal, either: Ukraine would be backed by the world’s strongest military; America would get a defensive liability right on a rival’s doorstep—and increase the risk that this rival would feel cornered and lash out.