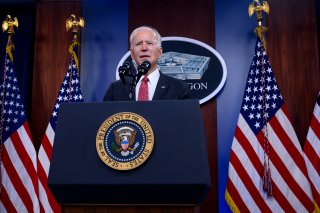 As President Joe Biden finalizes his defense budget for FY2024 and his defense program for FY2024–2028, he needs to address at least the following ten major. How he handles these issues will significantly impact U.S. national security, the federal budget deficit, and his legacy. Moreover, given the political realities of the upcoming 2024 election, the FY2024 budget, which goes into effect on October 1 and lasts until October 2024, and Biden’s FY2024–2028 defense program may be his last, best chance to significantly reshape U.S. national security policy.

First, in deciding on the top line, or the size of the FY2024 defense budget, will Biden use the $813 billion he proposed for FY2023 as a base? The $813 billion represented an increase of $73 billion, or 10 percent, over the FY2021 budget, the last complete budget of the Trump administration, and $60 billion, or 8 percent, above what he proposed for FY2022. Or, will Biden use the $860 billion approved by Congress in the National Defense Authorization Act (NDAA) for FY2023? This congressionally approved budget was $110 billion, or about 15 percent, above the Trump administration’s FY2021 budget level, and $82 billion, or 11 percent, over the enacted FY2022 level. In real terms, Biden’s initial proposal for FY2023 essentially represented a 4 percent increase, while the NDAA proposal had a real increase of about 9 percent. This total does not include military assistance to Ukraine but does include $2 billion for Taiwan.

Second, after deciding on the base, which rate of inflation will the Biden administration use to determine whether to maintain the current level in real terms, as it did last year, or provide a real increase, as Congress did previously? The yearly inflation rate in January 2022 was 6 percent, the second highest in forty years. Even with no real growth, a 6 percent increase above the amount Biden requested for FY2023 will mean an FY2024 budget request of about $870 billion. Using the NDAA level as a base will result in a budget request of approximately $900 billion. Both these amounts would be significantly more than what the Biden administration projected last year it would spend on the Department of Defense (DOD) in FY2024.

Third, in addition to deciding on which base and which rate of inflation to use in determining the top line for FY2024, Biden must decide on how to deal with those members of the Freedom Caucus in Congress who want to return the FY2024 defense topline to the FY2022 level of $775 billion. While many see this as an extreme measure, it is important to keep in mind that a defense budget topline of $775 billion for FY2024 would be $35 billion, or 5 percent, above the Trump administration’s last budget and about the same amount Biden himself had projected in his first year in office that he would propose for FY2024. While many would argue that the Russian invasion of Ukraine and China’s aggressiveness toward Taiwan have significantly changed the international environment, it is important to remember that U.S. support for Ukraine is funded separately from the regular defense budget. In addition, Taiwan is paying for most of the weapons we are providing.

Fourth, will the Biden administration finally release its budget in a timely manner? During Biden’s first two years in office, the administration released its budget, including the defense portion, more than a month later than the normal practice. This makes it much more difficult for Congress to pass the budget before the start of the fiscal year. This is particularly difficult for the DOD. Until a budget for the new fiscal year is passed, the Pentagon can only spend at the previous year’s level and cannot start any new programs.

Fifth, in addition to deciding on the base and the inflation rate, the president must decide on the rate to increase military, active duty, and retired pay. The basis for raising active-duty pay is the Employment Cost Index (ECI) as of September 30, 2022, which was 5 percent compared to 4.6 percent a year ago. This would be the highest raise in thirty years. For retired pay, the average  cost of living increased by 8.7 percent from July to September 2022. The Biden administration, or any administration for that matter, is not bound by law to implement these levels, but most administrations do. Since pay and benefits already consume one-quarter of the overall budget, how much Biden raises them will have a significant impact on how much will be left for investment in current nuclear and conventional procurement and research programs in whatever topline he chooses.

Sixth, after deciding on the base, will Biden increase the budget by just enough to keep pace with inflation, as he did last year, or will he accept a real increase of 3 to 5 percent, which some in Congress, including many in his own party, say is necessary to keep up with the growing threats from Russia and China? Increasing the budget by 3 or 5 percent in real terms, with an inflation rate of 6 percent and using the FY2023 NDAA as a base, will result in an FY2024 defense budget request of about $922 billion, $110 billion more than Biden requested just a year ago.

Seventh, will Biden make any changes in the level of funding for nuclear weapons now that he has completed his Nuclear Posture Review? In his first two budgets, Biden ignored his campaign pledges and the Democratic Party platform, which called for reducing overreliance and excessive dependence on nuclear weapons. Instead, in his first budget, Biden embraced the proposal he inherited to rebuild and modernize all three legs of the nuclear triad—at a cost of $1.7 trillion—and provided funding for four new tactical nuclear weapons, including the low-yield nuclear cruise missile. Last year, Biden did try to cancel the low-yield warhead but was overridden by the Democratic-controlled Congress and had to continue funding this program for another year.

The Democratic platform characterized the Trump administration’s nuclear proposal, which Biden inherited, as unnecessary, wasteful, and indefensible. Moreover, while running for president, Biden pledged to dismantle America’s commitment to increasing the role of nuclear weapons. As vice president, he advocated a no-first-use policy. Many of Biden’s supporters had hoped that his pledges would lead to his cutting back or even eliminating the land-based component of the nuclear triad, which will cost $264 billion to maintain and modernize. This position has been advocated by, among others, former Democratic Secretary of Defense and nuclear expert William Perry and House Armed Services Committee Ranking Member Adam Smith (D-WA). Unfortunately, Biden’s Nuclear Posture Review did not make such a recommendation. The most likely cuts would be canceling one or more of three tactical nuclear weapons programs: a new nuclear-armed cruise missile now in the research phase, a Cold War-era thermonuclear bomb, and a new low-yield warhead that the Trump administration deployed on submarines.

Eighth, will Biden continue his “divest to invest” strategy for our naval forces, and what will be his goal for the ultimate size and composition of the fleet? In his FY2022 request, Biden proposed decommissioning fifteen ships, including seven cruisers and four littoral combat ships, and building only eight in replacement—far fewer than were funded in FY2021. Congress not only authorized an additional four ships but limited the ability of the Navy to decommission ships. In his FY2023 budget request, Biden proposed $27.9 billion to purchase eight new ships and retire fifteen. But Congress again added $5 billion for six new ships and prohibited the decommissioning of twelve of the fifteen. In light of these changes, the Biden administration will have to decide whether to increase its goal of expanding the Navy from its present level of 296 ships to 321 by 2030. And if it does, will the administration take the money from the other services or increase the budget topline?

Ninth, will Biden continue to try to slow down the production of the tri-service F-35 aircraft until it fixes its myriad problems? For FY2023, Biden requested sixty-one of these aircraft, down from eighty-five the previous year, but Congress added eight more to bring the total to sixty-nine.

How Biden handles these issues will not only have a significant impact on our security and economy but will also tell us a great deal about his values. As Biden said before becoming president: “Don't tell me about what you value. Show me your budget, and I will tell you what your values are.”

Lawrence Korb is a Senior Fellow at the Center for American Progress and former Assistant Secretary of Defense.