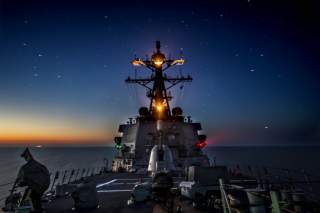 What happens when a Hollywood studio spends tens of millions on a movie, hiring the most brilliant screenwriters and biggest stars, only to discover that the film is a turkey? The studio switches to stealth mode: reschedule release for the dead of winter, refuse to screen the film for critics beforehand, then go with a “soft” release.

Everyone involved moves on, hoping that audiences will forgive and forget. That pretty much describes the game plan for the Pentagon’s most recent Quadrennial Defense Review (QDR), released last March.

But wait! A major review is in the works, and it’s not likely to be favorable.

Next month, the bipartisan, Congress-chartered National Defense Panel (NDP) is expected to release its evaluation of the QDR, complete with its own independent assessment of U.S. defense needs. Because the administration’s report was such a bomb, the NDP’s sequel may well be better box office.

The latest QDR bombed because, as predicted, it turned out to be less of a strategic document and more a rubber stamp to legitimize further budget cuts. Representative Buck McKeon, chairman of the House Armed Services Committee, panned the document as a “product” that “has more to do with politics than policy and is of little value to decision makers.” He demanded that the Pentagon rewrite the report. Pentagon officials fired back that they would only redo the report if they were required to do so by law.

More telling than the internecine squabbling between the two branches of government was how the rest of Washington reacted to the report. The media treated the QDR like a speed bump in the news cycle. Think tanks drove past the QDR like intellectual road kill. The report had a few defenders—but not many. Joe Collins, a teacher at the National War College, was one who penned a few nice words about the QDR, but even he admitted, “We can do better strategic analysis….”

Now all eyes turn to the NDP, a bipartisan collection of former military and government officials, tasked with looking over the shoulder of the QDR and delivering its own verdict on what is needed to provide for the common defense.

Based on an informal, off-the-record survey of defense and foreign-policy experts, here are ten questions—left largely unanswered by the QDR—that the NDP should address clearly and realistically.

#1: Did the QDR cut it? The QDR either met both the spirit and the letter of the law or it didn’t. Enquiring minds want to know. The law that established the NDP specifically requires the panel to render a judgment on this question.

#2: What is the role of the military in America's foreign policy? Can the NDP give better answers than the pabulum in the QDR? Representative Adam Smith, ranking member of the House Armed Services Committee, tried hard to defend the QDR. Yet even Smith acknowledged that the report fell short in this respect. “I would hope,” he said, “that a defense strategy would give us a better sense of prioritization among military missions.”

This administration has long argued that hard and soft power are fungible—that ramping up diplomacy and drone strikes is interchangeable with the requirement for conventional forces. Others have different ideas. If there is one point everyone in Washington agrees on, it is that they don’t all agree on what they want their forces for. What will the NDP say?

#3: Is the QDR's force-sizing construct the right one? This may be the million-dollar question. In 2011, the Obama administration began a dramatic shift in defining defense requirements. The Pentagon walked about as far away from the two-major regional contingencies (two-MRC) as a force-sizing and strategy construct as they could without closing the door behind them. Will the NDP agree or disagree that it is no longer important for a great power to have enough capacity to do two big things at once?

#4: What is the global threat environment? The QDR buys more risk by assuming the world is going to get less troublesome. Will the NDP endorse that bet, or does the panel have a different idea of how to think about the future and force structure? How important is American leadership in dealing with future threats? How much military power is required to back that up?

#5. How much should the Chinese buildup drive defense planning? Doubtless some on the panel would like to make China the “pacing” threat for establishing baseline requirements. If the Pentagon followed that logic and remained committed to a two-MRC construct, then defense planning would look a lot like a counter-China times two (with allowances for the kinds of forces needed for different theaters). Will that be the NDP’s recommendation?

#6: How destructive were the 2011 cuts? The defense budget got hit with a double whammy that year: the administration’s version of a “peace dividend,” plus sequestered funding under the Budget Control Act of 2011. How much damage did that do—really? On the one hand, there is the argument that putting the defense budget on a diet drove efficiencies and forced tough, hard choices that “had to be made.” Others argue that the cuts were made in a way that bypassed the fat and cut to the bone. Both can’t right. Either readiness is dropping and the military’s gap in capabilities is showing or it isn’t. What’s the call, NDP?

#7: Can we really trade capability for capacity? The QDR tries to square the circle of not having enough resources to go around by arguing that we can still cover America’s global interests by preserving “niche” capabilities. Will the NDP sign off on that? Or is the panel in the “quantity has a quality all its own” camp?

#8: Do we really need a nuclear triad? Nuclear forces and the nuclear force structure have garnered scant attention in the latest round of defense debates—even though President Obama has been quite aggressive in trying to reshape the force. Additionally, the administration’s numerous “road to nuclear zero” initiatives remain controversial. At least one member of the panel is on record as calling for deep cuts in nuclear arms. Where will the NDP come down, if it tackles the issue at all?

#9: What programs should we buy now? If the NDP expects to get anybody’s attention, the panel can’t be just a bystander and complain about the shortfalls of the QDR. Where would they invest in defense?

#10: How much, if at all, should the topline go up? At the end of the day, Washington needs to know if the Pentagon can provide for the common defense for the foreseeable future. And, if it can’t under current budget levels, how much will it cost to get the job done? Many in Washington insist that the Pentagon can still do all that it needs to do on a tighter budget by driving more efficiencies and cutting stuff that is really not needed. Others argue that defense is already in deficit and essential reforms alone can’t close the gap. Will the NDP weigh in?

If the NDP answers these ten questions, its report will be worth reading. That’s more than critics could say of the QDR.