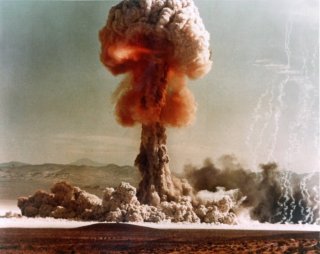 In 2009, in Prague, President Obama pledged his administration would “immediately and aggressively pursue U.S. ratification of the Comprehensive Test Ban Treaty” (CTBT). This August, it was reported that since there was no progress in seven years, the president would seek a United Nations Security Council resolution that calls for an end to nuclear testing. This action only temporarily bypasses a debate on ratification in the U.S. Senate, and will nevertheless open a new round in the already bloody fight between supporters and opponents of the CTBT. In the unlikely event that the Senate takes up the CTBT debate in the first two years of the next administration, the probable outcome is still no ratification. A path has not been found to bridge the bitter divide between those who support and those who oppose passage of the CTBT.

Supporters believe that U.S. adoption of the CTBT will slow the spread of nuclear weapons and strengthen the resolve of Non-Proliferation Treaty signatories to take robust actions against those who seek to acquire weapons, without risking the safety or reliability of the U.S. nuclear stockpile. Supporters correctly underscore the cumulative risk that the existence of any nuclear weapons presents for accident, unauthorized use and theft. Opponents believe that with appropriate measures, these risks are acceptable compared to foregoing nuclear testing forever in an uncertain world. Opponents also doubt that U.S. accession to the treaty will dissuade some countries, such as North Korea, or subnational groups, such as ISIS, from pursuing the bomb.

The CTBT debate has gone on so long and with such intensity that it is hard to avoid the impression that the proponents and opponents would rather fight than win. It has become a symbolic issue. Proponents no longer claim that testing is necessary for a country to acquire or be perceived to have acquired a nuclear capability—e.g., Israel. Opponents have greatly reduced their concern about CTBT “cheating” (the clandestine testing of a low-yield nuclear device in an underground cavity that is seismically decoupled from the surrounding earth), due to the deployment and operation of the nuclear global seismic detection network.

Moreover, even if the United States ratifies the CTBT, Annex 2 of the 1996 treaty requires forty-four nations to ratify the treaty before it enters into force. Six of those nations have signed but not ratified (China, Egypt, Indonesia, Iran, Israel and the United States); three have yet to sign (North Korea, India and Pakistan); it is unlikely all will ratify in the foreseeable future. Over the years, we have also learned that it is possible, although not originally expected, that diplomacy can influence countries that have acquired, or are moving to acquire, nuclear weapons to turn away from the bomb without the CTBT—for example, South Africa, states of the former Soviet Union and, most recently, Iran.

As a strictly technical matter, validation of the integrity of the nuclear stockpile can be accomplished only by comparing the predictions of DOE weapons laboratories scientists to detailed measurements from a nuclear test. However, there is no rush to carry out a nuclear test and much reason to continue the nuclear test moratorium. An early U.S. nuclear test could invite the Russians and Chinese, who are ramping up their nuclear delivery systems, to carry out an extended test series to perfect their nuclear weapons. Both supporters and opponents of the CTBT share the view that in the near term, the conflict situations in which the United States may become engaged can be met exclusively with conventional weapons, so for the time being, the U.S. nuclear deterrent is credible for the range of contingencies that are likely to be encountered. Thus, the prevailing political judgment is that it is advantageous for U.S. national security not to engage in testing that might encourage other countries to do so, or to move more rapidly to acquiring a nuclear capability and forgo the level of technical validation that can come only from testing.

In the absence of nuclear tests, the United States has relied on two mechanisms to assure the continued credibility of its nuclear weapons stockpile: an extensive science-based stockpile stewardship program, and a formal annual certification process.

On the other hand, a stockpile stewardship program, however elaborate, that is not required to reconcile its predictions of device behavior with empirical measurement will always be open to question. It is fair to ask why one should lack confidence in the judgment of those talented DOE weapons-lab technical staff who design and carry out the stockpile stewardship program. The answer is not that these individuals are incompetent, or corrupt, or lack the resources to do their job well. Many with experience in large technical organizations are aware of the danger that cumulative pressure on a group’s (as opposed to an individual’s) behavior to produce results that confirm the sponsor’s interest. Congress and corporate headquarters will give greater support and more money when they hear the results they expect (and do not complicate their lives), and less support and money when they hear bad news. Not surprisingly, to compensate for this collective human frailty, technical organization uniformly place great emphasis on independent testing and measurement at every stage of development, production and deployment.

The annual certification process by law requires the president to transmit to Congress annual unaltered letters from the directors of the three DOE national weapons labs and the commander of U.S. Strategic Command reporting on the safety, performance, reliability and military effectiveness of each nuclear weapon type in the stockpile, together with an assessment as to whether underground tests are necessary to resolve any issues. These letters are the result of a complex technical process, and the expert judgments they convey are intended to validate the stockpile stewardship effort. It is an understandable and sensible bureaucratic response to an impossible dilemma: using expert judgment to substitute for experimental verification. Review panel members may well ask themselves: what would be the consequence of an adverse finding? An adverse finding would overthrow the policy apple cart; questions would inevitably be raised about whether the finding was politically or technically motivated. Procedures such as the annual certification process are not intended to make a smooth transition from one policy to another, but rather to remain steady on the current path.

Two developments would lead the United States to reconsider its moratorium on nuclear tests. First, a change in geopolitics that led one or more nations to acquire nuclear weapons, accompanied by a destabilizing posture that threatened the United States and its allies, would certainly justify a reevaluation of U.S. nuclear weapons policy and testing. Such a development is an important reason for opponents to oppose the CTBT, because adherence to the treaty means the signatory gives up the right to test forever. Supporters of the CTBT reply that the CTBT, like every treaty, has a provision that each state party has the right to withdraw from the CTBT if the state party decides that extraordinary events related to the subject matter of the treaty have jeopardized the state party’s supreme national interests. It is a curious position: essentially, it states that it is acceptable to agree to a treaty of unlimited duration, because if extraordinary conditions arise, it is possible to withdraw from its obligations. But international opinion may not agree that conditions that lead the United States to assert “supreme national interests” is genuine, i.e., related to the subject matter of the treaty. Consider the possibility that Russia launches a series of nuclear tests to validate new warheads for its modernized nuclear forces. U.S. public opinion would likely expect its political leaders to respond, perhaps by undertaking its own series of tests. International treaty experts might well assert that a Russian nuclear test series per se does not endanger the integrity of the U.S. deterrent, and hence justify U.S. withdrawal from its treaty obligations.

Second, and more important, during many successive years of annual certification of the safety, performance and reliability of nuclear warheads, numerous technical issues about these devices have been raised—materials stability, circuit failures, corrosion and other matters. Each issue is resolved after a sober review process conducted by the DOE’s NNSA laboratories. However, over time, the question of how to validate the stockpile stewardship knowledge base and its use, rather than just validating the present status of weapons, will grow.

An occasional test to confirm knowledge would remove this doubt and underscore in the minds of both the United States’ leaders and its adversaries that an American nuclear weapon, if used, will have predictable results. If doubts grow about the United States’ ability to predict with confidence the effects of nuclear use, their deterrent value declines in proportion. Confidence at home and abroad that U.S. nuclear weapons are usable makes U.S. nuclear power believable, sustains their deterrent value and ultimately reduces the likelihood of use. The confidence is established not by expert reports, but by the conventional scientific method: public tests that confront the predictions of laboratory scientists with measurements from exploding a nuclear device. Such tests do not have the same motivation as many of the prior hundreds of U.S. tests undertaken for weapons development and determining weapons effects, but rather to demonstrate to others and ourselves the United States’ level of understanding of the experimental results of a nuclear-weapon explosion. Such a confirming test would have the additional benefit of providing new motivation and stimulation to the NNSA technical staff.