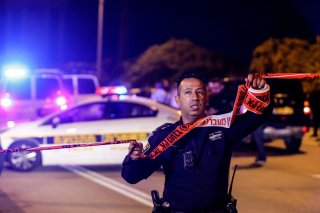 The victims were ordinary people going about their day. A Chabad rabbi bicycling home with groceries, a shopper staring at a store shelf, a young mother on her way home.

Palestinian Authority president Mahmoud Abbas issued a rare condemnation of the terror attacks, as dozens of Palestinians rallied in support of the gunman in his West Bank hometown.

Ramallah had refrained from publicly discussing the escalating terror wave against Israelis at all, remaining silent during the deadly attacks. Surveys regularly show that large swathes of the Palestinian public view “armed struggle” against Israel as legitimate.

Still, we all need to summon the courage to condemn this barbarism; maiming or murdering civilians does not advance any political cause. We must, all of us, condemn this evil anarchy and not let any sympathy for the extremists cloud our moral judgment about murder. Politics does not excuse violence.

Context matters, especially in making moral judgments. These attacks come long after the historic Abraham Accords were signed in 2020, formally making peace between Israel and four Arab nations. In short, the attacks worsened after the peace plans were adopted. Morally, this makes no sense.

Most importantly, we must find the courage to ask the fundamental question that concerns the Muslim world: why is our faith too often defined by extremists rather than genuine scholars?

Let’s start by acknowledging that clan and culture have produced very different practices of Islam throughout history. There is no resemblance, for example, between the Islam of Cordoba (Spain) and that of the Fatimids (Iraq).

Different phrases in the Koran or the Sunnah are interpreted differently by scholars and clerics in different regions and time periods. There is not one Islam that is identical in practice throughout the globe—just as Judaism and Christianity differ in faith and practice on different sides of the Mediterranean. So, we must accept the diversity of sincere Muslim belief.

Sayyid Qutb, a philosopher of the Muslim Brotherhood and many its offshoots, and others have argued that Jews and Christians are designated by Islam as perennial enemies. Qutb’s books, Milestones and In The Shade of The Koran, specifically call on believers to train with arms to undertake jihad against non-believers. Qutb, who was hanged by the Egyptians in 1966 for inciting terrorism, was reinterpreting seventh-century texts for a jet-plane reality. Many of today’s terrorists have followed Qutb’s intellectual line.

We, as Muslims, must come to see jihad as a struggle to overcome yourself, not a duty to overthrow peace and justice. The real jihad is to set aside the driving desires for prideful vengeance in exchange for tolerance and peace. This is not naturally appealing to young ideologues, so much work will have to be done.

This fight must be waged on all fronts. Clerics have the heavy burden of demonstrating that Islam can adapt to our times. Philosophers, men of letters, and politicians must offer another perspective to the Muslim world other than the adversity of otherness.

The growing tensions highlight the vulnerabilities of a paradigm shift in Israeli-Palestinian relations that has accelerated in recent years: that Palestinian peace talks, moribund for nearly a decade, are not necessary for Israel to be embraced by the Arab world, and that Israel can manage its century-old conflict with the Palestinians through economic and confidence-building measures.

Out of loyalty to the victims, we must all fight against all evils that fuel murderous hate: racism, barbarism, and extreme ideologies. The public should demand that the Palestinians and the Israelis return to the bargaining table, focusing on ending hate-promoting messages in textbooks and broadcasts.

We must do it for our children. We have no right to bequeath them a world where extremes kill, and ordinary people die.

Ahmed Charai is a Publisher of The Jerusalem Strategic Tribune. He is on the board of directors of many think tanks including the Atlantic Council, International Crisis Group, Center for Strategic and International Studies, Foreign Policy Research Institute, and Center for the National Interest.