Terrorists are Tightening Their Grip on Yemen 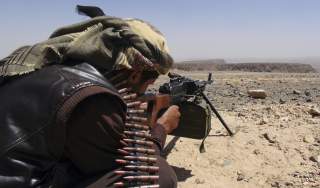 A recent investigation by the Associated Press revealed that Al Qaeda in the Arabian Peninsula (AQAP) may have been bought off by the United Arab Emirates, Saudi Arabia, and the Yemeni forces they back. The investigation cites instances of deals having been made between AQAP, the UAE, and their proxy forces.

The investigation also points out something that was already widely known among those who follow Yemen: AQAP is fighting alongside some of the Emirati and Saudi backed militias that are battling the Houthis, a Zaidi Shia rebel group that controls much of northwest Yemen. For many of these armed groups and possibly for Saudi Arabia and the UAE (both close U.S. allies), defeating the Houthis, a sworn enemy of AQAP, takes priority over concerns about working with Al Qaeda.

The Associated Press investigation, which appears to have been based on extensive in-country interviews, paints a picture of AQAP as an organization that remains as formidable as it is capable. This stands in contrast to the assessment being put forward by the UAE, Saudi Arabia, and some Yemen analysts who argue that AQAP is a fragmented organization that has been greatly weakened by coalition backed counterinsurgency operations in southern Yemen.

This view of AQAP as a weak and fragmented organization may reflect a misunderstanding of AQAP’s strategy in Yemen. Rather than being weak and fragmented, AQAP is drawing on the lessons that it has learned from the past six years of failures and successes. Chief among these is that it is adopting a more pragmatic strategy that embraces a decentralized or nodal structure. Such a move away from centralization could easily be mistaken for fragmentation. However, it is more likely that AQAP is merely adapting to and taking advantage of the ever-shifting contours of Yemen’s three-year-old war.

The leadership of AQAP recognized early on that enmeshing itself within local communities was key to expanding its influence and guaranteeing its long-term survival. It has, at least on some level, been doing this since its inception. However, the focus on enmeshment gained momentum after its near defeat in 2012 by a combined offensive by the Yemeni Army and popular militias that enjoyed well-coordinated and precise support from the United States.

AQAP learned many lessons from what was a calamitous year. First, they adopted a gradualist approach to enforcing their radical interpretation of sharia (Islamic law) so as not to alienate locals who by in large find such an interpretation to be an anathema. Second, they focused on indigenizing their organization. The foreign fighters, many of whom were from Somalia, that they had incorporated into their ranks caused resentment and left AQAP open to charges of being a foreign force bent on occupation.

AQAP has learned from its own mistakes and it has also learned from the mistakes of Al Qaeda central. Al Qaeda failed—at least for many years—to indigenize its forces and enmesh itself within its host country’s sociopolitical context. AQAP, and other newer militant Salafi groups, however, appear to be more inclined to model the Taliban than Al Qaeda Central. The Taliban are woven into the fabric of much of Afghan society and they are first and foremost an organization that patiently pursues long-term strategic goals.

The seizure of Sana’a, the Yemeni capital, by the Houthis in September 2014 and their subsequent offensive in which they briefly and brutally occupied Aden and other parts of southern Yemen was a shot in the arm for AQAP. The Houthi offensive and the resulting Saudi and Emirati led incursion, dubbed “Operation Decisive Storm,” which began in March 2015, provided AQAP with the perfect environment in which to test new approaches and strategies that in many respects mirror those of the Taliban.

In the same month that Saudi Arabia, the UAE, and their coalition partners launched Operation Decisive Storm, AQAP seized the port of Mukalla, Yemen’s fifth largest city. AQAP occupied and governed the city through proxies for a year. In April 2016, Emirati-led forces seized the city from AQAP without a fight. AQAP’s yearlong occupation and governance of a major city was in many ways a success for the organization. It learned that governing and operating through proxies was a viable strategy that provided it with the political and tactical cover that it required.

Most importantly, such a strategy allowed it to more fully enmesh its operatives within very specific local contexts. At the same time that AQAP was occupying Mukalla, its fighters were also deployed to those areas where various forces were battling the Houthis.

It is on the frontlines of the battle with the Houthis that AQAP has really found its footing. In many fiercely contested areas like the city of Taiz and the governorate of al-Bayda, AQAP’s operatives and foot soldiers are deeply involved in the fight against the Houthis where they are valued for their discipline and fighting skills. Similar to the strategy it employed in Mukalla, AQAP has deprioritized its emphasis on the implementation of Sharia and the waging of transnational jihad in favor of inserting itself into a variety of sociopolitical and martial contexts.

AQAP’s strategy has shifted from one that was ambitious, uncompromising, vocal, and, at least to some degree, global in its outlook, to one that is intensely local, relatively quiet, and pragmatic. This could make it appear that the group is fragmenting and thus weakening. However, rather than fragmenting, it is far more likely that AQAP is adopting and employing a nodal structure that eschews centralized decisionmaking and authority. When such a structure is employed in a war as complex as Yemen’s, it makes it very difficult to determine who and who is not a member of AQAP. At the same time, Yemen is host to a growing number of Salafi militias whose ideological underpinnings are almost indistinguishable from those of AQAP. This combined with what are clearly efforts by AQAP to “go dark” in response to a U.S.-led drone campaign that relies heavily on signals intelligence means that AQAP is going to be far harder to accurately target.

The war in Yemen has devastated the country’s infrastructure, further impoverished what was already the poorest country in the Middle East, and flooded an already heavily armed country with advanced weaponry. It is unlikely that a militant organization like AQAP, which has proved itself to be resilient and adaptable, would somehow fail to continue to exploit such an environment. Add to this the very real possibility that, at a minimum, the UAE and Saudi Arabia have turned a blind eye to AQAP, and it is all but certain that AQAP’s future in Yemen is secure.

Michael Horton is a senior analyst for Arabian Affairs at the Jamestown Foundation.

Image: A Southern Movement militant takes aim with his machine gun as he takes part in the securing of the Jabal al-Ierr area against Shi'ite Houthi fighters, in Yemen's southern Lahej province March 7, 2015. Most of Yemen has been left without state services or authority, and deadly violence is a daily occurrence as Houthis, state security forces, tribesmen, southern separatists and al Qaeda militants clash with each other. REUTERS/Stringer