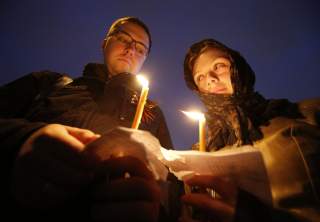 Russian president Vladimir Putin made headlines last week when he suggested a UN peacekeeping force for the Donbass region in eastern Ukraine. His proposal likely was not sincere, but Ukraine and its friends in the West should test the proposition.

The Kremlin for some time has favored a simmering conflict in Donbass as a means to put pressure on and undermine the government in Kyiv. A “school-year” ceasefire, worked out in late August, has gone the way of dozens of previous ceasefires. The sides continue to exchange fire across the line of contact that separates Ukrainian forces from Russian and Russian-controlled “separatist” forces.

However, speaking at a September 5 news conference, Putin suggested that the deployment of UN peacekeepers could help resolve the situation. He added that appropriate instructions would be sent to the Russian mission at the United Nations.

Many expressed skepticism about the proposal, justifiably so.

First, the Russian president conditioned the peacekeepers’ deployment on disengagement of forces and removal of heavy weapons in Donbass. The February 2015 Minsk II agreement called for that, yet the conditions remain unfulfilled more than two-and-a-half years later. He also suggested a peacekeeping mandate of just a six-month duration, an unrealistically short period for a conflict now well into its fourth year. Additionally, the force would be simply protect Organization for Security and Cooperation in Europe (OSCE) monitors.

Second, the Russian mission at the United Nations gave no details about Putin’s idea and had no resolution to table at the Security Council, which must authorize any UN peacekeeping force. In Moscow, Kremlin spokesman Dmitry Peskov also offered no details. He instead said Kyiv should discuss the matter with the leaders of the so-called Donetsk and Luhansk “People’s Republics,” repeating the fiction—now believed only by the most dedicated of RT viewers—that Russia is not a party to the conflict.

Third, Putin’s proposal would have the UN peacekeeping force deploy only along the line of contact in Donbass and nowhere else. (On September 11, Putin reportedly modified his idea, telling German chancellor Angela Merkel that the force could operate throughout Donbas—but only to escort OSCE monitors.)

These points raise the question: was Putin’s suggestion a genuine proposal aimed at advancing a settlement or just a throwaway line at a press conference?

Despite doubts about the Russian president’s proposal, German and American officials cautiously welcomed it. That was the right thing to do. Instead of rejecting the proposal outright, Ukraine, Germany and Kyiv’s friends on the Security Council considered testing Moscow’s seriousness.

Now that proposal must be reshaped. A UN peacekeeping force could make a serious contribution to ending the Ukraine-Russia conflict in Donbass—if it has a proper mandate.

Such a mandate would authorize the peacekeeping force to deploy not just on the line of contact but throughout occupied Donbass, including on the Ukraine-Russia border. The mandate would not have an unreasonably short timeline. And it would be sufficiently robust that the force could assert and maintain authority in the region; a repeat of the sad United Nations Protection Force (UNPROFOR) performance in Bosnia in the early 1990s would not help.

A UN force mandated to operate throughout Donbass could enforce the ceasefire and withdrawal of heavy weapons called for by Minsk II. It could secure the Ukraine-Russia border and staunch the flow of weapons and fighters from Russia into Donbass. It could provide security for OSCE officials assigned to monitor the implementation of Minsk II (but that should be only one of its assigned tasks). And it could create better conditions for providing humanitarian assistance.

All of this would be good—for the population of Donbass, for Ukraine and for Russia, provided that Moscow wants a settlement.

Some see in Putin’s proposal the possibility that the Kremlin seeks a way out of the Donbass quagmire. Put me in the skeptical camp, but I would be happy to be proven wrong on that.

It makes sense to test Moscow’s sincerity. If the Russian diplomats at the UN agree to negotiate a serious and robust peacekeeping mandate that, in particular, allows the force to operate throughout Donbass, that would boost the prospects for peace in Ukraine’s east.

If, on the other hand, Russian diplomats in New York do not engage on a worthwhile mandate, that would confirm what many suspect: Putin had no serious proposal.

Kyiv has little to lose. Ukrainian diplomats should coordinate with their American, British, French and Swedish colleagues on the Security Council on how best to reshape Putin’s proposal into a mandate for a peacekeeping force that would advance peace.

Steven Pifer is a nonresident senior fellow with the Brookings Institution and a former U.S. ambassador to Ukraine.