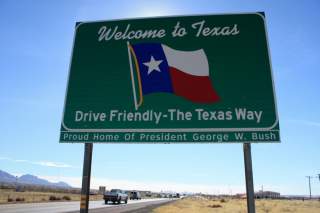 There is nowhere quite like Texas. Blessed with oil and cursed with heat, it is a state that rides the highs and lows of the energy market. And today, those are highs. Texas is enjoying the economic recovery the rest of the nation (except North Dakota) wishes it had, and accolade after accolade has been rolling in for its job creation and growth. But does Texas really deserve all the praise it is getting at the moment?

Job creation might be a good place to start. Texas has created jobs—there is little arguing that point. For instance, we know the U.S. economy only recently gained back the jobs lost in the Great Recession. This is not true of Texas. While the United States dropped about 6 percent of employment, Texas lost 4 percent and recovered them all by August 2011—nearly three years before the United States as a whole.

Here is where the numbers get interesting. From its peak in January 2008 through today, the United States has created only 750,000 jobs. Texas created over a million jobs during that same period—meaning that the rest of the country (RotC) is still short 300,000 jobs. During the recovery, job creation has been all Texas or—at the very least—disproportionately Texas. Choosing a different starting point—for example, the trough of job losses—changes the extremity of the story. From the bottom in February 2010, Texas produced nearly 1.4 million jobs and the rest of the United States created slightly more than 8 million. Texas grew employment twice as fast as the RotC. And this is not limited to the recovery either—since 2000, Texas has grown employment by 22 percent. The RotC grew employment, over the decade, by a total of only 4 percent—not annualized.

Texas GDP growth rates are also impressive—3.7, 6.9 and 4.2—for the past three years; all well ahead of the national rate. More impressive is that Texas contributed 23 percent of U.S. growth in 2012 and 22 percent in 2011. And there are real dollars behind the growth. North Dakota recorded a growth rate of 20.3 percent in 2012. But this barely moves the needle on a national scale. For perspective, the Texas economy produced $49 billion more in GDP in 2013 than in 2012, which constituted 17 percent of all U.S. growth. North Dakota grew by $7.6B; contributing roughly 2 percent of U.S. growth.

Without Texas, U.S. GDP would have grown about 2.1 percent in 2012—not the reported 2.5 percent. In fact, the growth of the Texas economy has outpaced the U.S. economy for some time. As a proportion of the U.S. economy, Texas made up only 7.7 percent in 2006. Today, it is nearly 9 percent. Consistently outgrowing the RotC has slowly built the Texas economy into the most pivotal contributor to the U.S. economy. Since the peak of U.S. GDP in 2007, Texas has contributed 32 percent of all economic growth in the United States. That is an astounding number. From 2007 through the end of 2013, the U.S. economy grew by $702 billion, and Texas grew by $220.5 billion.

Texas is an economy firing on all cylinders, and there are few places it could be functioning much better. Median incomes have been on the rise in Texas, and are approaching their late ‘90s peak. Meanwhile, the United States has seen declines in median incomes and incomes are below where they sat in the late ‘80s. Texas is also seeing average hourly earnings grow at more than double the pace of the RotC. The rate of wage growth in Texas is enough to warrant thoughts of inflation.

This explains why Dallas Fed President Fisher is so hawkish. Simply, his region is radically outperforming the RotC, and actually does seem to be running the risk of inflation from wage growth and hitting its target of full employment. But this should not be fooling the Federal Reserve. After all, besides Texas, the recovery does not seem too robust.

This also helps explains why a Wall Street Journal poll found that 49 percent of Americans believe the United States is still in a recession. Looking beyond Texas, there really is no significant economic recovery. Without the Lone Star State, the United States has created no jobs and GDP is a mere 4 percent above its 2007 peak. Meanwhile, the Texas economy has grown by 19 percent.

And the Texas boom can be easily explained—oil. The shale revolution—and the services necessary—is primarily responsible for the boom in Texas. So, does Texas really deserve all the praise it receives for its economy? Probably not, and it will be interesting to see what is said when the oil bubble bursts. Will there be a eulogy that laments the inability to diversify the Texas economy away from oil? Will Dutch disease creep into Texas and come back to haunt it? It is impossible to tell, but policy makers and observers should pay close attention to how well Texas executes on broadening its base. For now, Texas is the center of the U.S. economy. But the boom will not last forever.

The United States should begin asking itself where the post-Texas growth will come from. After the oil boom, is there anything that can carry the torch? The United States cannot rely on Texas carrying the economy forever, and the economic recovery will be threatened by any significant shift in its economy. While some are becoming excited that the U.S. economy is finally reaching escape velocity, it may be that they are being deceived about where the growth is coming from. As the global economy searches for the next China, the U.S. economy should be searching for the next Texas.