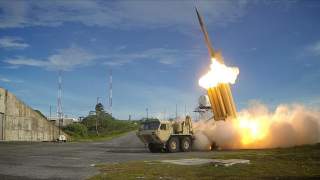 After months of negotiation, the United States and South Korea announced on July 8 their decision to deploy the Terminal High-Altitude Area Defense (THAAD) missile defense system in South Korea. During a press briefing, China’s Defense Ministry spokesman Yang Yujun said that Beijing is “firmly opposed to the proposed THAAD deployment… and will take necessary measures to maintain national strategic security as well as regional equilibrium.”

Why Is China Opposed to THAAD Deployment?

China is opposed to THAAD deployment for several reasons. First, Chinese analysts believe that THAAD in South Korea is intended to intercept missiles launched, not from North Korea, but from China and Russia. THAAD has an operational range of 200 kilometers (km) and is designed to intercept missiles at altitudes between 40 and 180 km. Such altitudes, according to analysts from the People’s Liberation Army (PLA), match the “terminal phase” of the intermediate, long-range and even intercontinental ballistic missiles (ICBM), or those with ranges exceeding 3,500 km. PLA analysts also claim that they match the “mid-course phase” of medium-range missiles, or those with ranges between 1,000 and 3,500 km, including China’s DF-21 and DF-26 missiles. Because the direct threats to South Korea — including the Seoul area, where 40 percent of the South Korean population resides — are North Korea’s long-range artilleries and short-range ballistic missiles, THAAD, they believe, is clearly a mismatch against such threats.

Chinese analysts are particularly concerned about THAAD’s X-band radar. Even though it would be configured as a fire-control radar with a detection range of 600 km, it perhaps could be reconfigured as an early-warning radar, which allows a detection range exceeding 2,000 km. Such a range suggests that China’s missile activities on land and at sea in northern and eastern China may be mostly exposed. The radar allegedly can see the critical processes where warheads and decoys are released during China’s strategic missile tests. In times of war, it can undermine the reliability of China’s strategic deterrent because in comparison with Alaska-based radars, it is believed to be capable of acquiring more than ten minutes of early warning time against China’s strategic ballistic missiles. It can also differentiate real warheads from decoys. If integrated into the U.S. national missile defense network, this radar allegedly can increase the odds of success in intercepting Chinese missiles even at their “boost phase,” reducing further the reliability of China’s already small strategic deterrent and tilting the strategic balance in favor of the United States.

Moreover, Chinese analysts believe that the Korean Peninsula has historically been a nearby sphere critical to China’s security. They worry that by deploying THAAD, South Korea could share data with the United States and Japan on air traffic control, air defense, and early warning. This may help to integrate South Korea-based systems with U.S. and Japanese sensors and sea-based Aegis systems, with the goal of forming a trilateral strategic alliance to contain China at China’s door steps. Chinese analysts believe that North Korean nuclear tests were only an excuse used by the United States to deploy THAAD, the real U.S. intention being to drive a wedge between South Korea and China at a time when China-South Korea relations were improving substantially, as reflected in the countries’ booming bilateral trade and Park Geun-hye’s attendance at the Victory Day Parade in Beijing in September 2015. THAAD deployment would bring the United States and South Korea closer at the expense of China’s security. This could help the United States to stabilize U.S.-South Korea relations and prevent the possible loss of the U.S. military foothold on the Korean Peninsula.

Furthermore, Chinese analysts believe that THAAD deployment in South Korea may encourage Japan to import THAAD to compensate for the range deficiencies of its PAC-3 missile defense systems. They also believe that South Korea’s decision would not only harm South Korea-China relations, but also harm South Korea itself by removing its “strategic flexibility” in balancing among major powers and in handling North-South relations. By directly challenging China’s strategic security interests, some argue, South Korea has also set a bad example for China’s neighbors to follow if no substantial cost is incurred to South Korea. Finally, Chinese analysts claim that THAAD deployment would not deter North Korea from developing nuclear weapons, but instead may drive it to develop more and better nuclear weapons and missiles.

Chinese analysts have proposed a wide range of countermeasures to retaliate against the THAAD deployment. They argue that it is time to integrate technologies into Chinese medium-range ballistic missiles that can reinforce their penetration capabilities (突防能力), such as those that can enhance mid-course or terminal maneuverability of warheads to dodge intercepting missiles. These technologies and measures also include integrating decoys to mislead the intercepting missiles, hardening warheads, and building more missiles. They also propose electronic countermeasures to jam THAAD radar. Some believe that China’s flight-tested DF-ZF supersonic missile delivery vehicle, which allegedly can reach the speed of Mach 10, can “turn all missile defense systems obsolete in one night.” Some also argue that in times of war, China should “at the first moment” launch strikes to destroy THAAD. To elude South Korea-based THAAD, Chinese analysts propose to deploy China’s strategic nuclear submarines to the Pacific Ocean for routine patrol. Being highly mobile and more concealed than China’s land-based nuclear deterrent, these submarines can enhance the survivability of China’s sea-based nuclear force, thus enhancing the credibility of China’s second strike nuclear capabilities.

Chinese analysts argue that to restore regional “strategic balance,” China should cooperate with Russia in developing strategic offensive weapons, particularly in developing “penetration” technologies that can defeat missile defense. Other proposed countermeasures include concealment and redeployment of China’s strategic capabilities to reduce their exposure to the THAAD radar, and accelerated development of China’s own missile defense systems.

Other analysts argue for economic sanctions. Some propose that Chinese nationals should boycott travelling to South Korea, which can hurt South Korea’s tourism, hotel and luxury goods businesses. Chinese nationals can also volunteer not to watch South Korean soap operas or use South Korean cosmetic products. They also suggest establishing “technical barriers” against South Korean imports and imposing visa restrictions on South Korean performers intending to enter China, as well as shelving bilateral consultations on major projects in economics and trade, such as those related to the “One Belt, One Road” initiative. China, they argue, should also impose sanctions at the local level including in North Gyeongsang Province, where THAAD would be deployed. Economic and cultural exchanges, for example, could be put on hold. Chinese sanctions could also target South Korean business conglomerates and well-known individuals associated with the South Korean defense-industrial complex and the THAAD decision, through restrictions on their business involvement inside China and bans on their travels to China.

While a majority calls for sanctions, there also exists a minority view based on a more nuanced and moderate interpretation of the THAAD deployment. On the effectiveness of THAAD to intercept short-range missiles, this view agrees that a launched North Korean Scud missile targeting Seoul may fly lower than 40 km because of the short range. This missile cannot be intercepted by THAAD because such low altitudes do not match the interception altitudes of THAAD, even though it can be intercepted by South Korea’s Patriot PAC-2/3 interceptors. But if a Scud missile is fired to hit a South Korean target 300 km away, it would reach the maximum height of 80 km and then descend to 40 km in slightly more than a minute, which matches the interception altitudes of THAAD. For this school of thought, a major challenge for South Korea is how to acquire sufficient defenses against North Korean missiles, while at the same time not undermining China’s strategic security. The best option, according to these analysts, is for South Korea to replace the current AN/TPY-2 radar with the Israeli Green Pine radar, which has an effective search range of 500 km. Such a range can provide South Korea sufficient protection against North Korean missiles, while posing no threat to China’s strategic missiles.

China’s security analysts have offered great insights into why China is opposed to THAAD deployment in South Korea, and what countermeasures China might take to “maintain national strategic security as well as regional equilibrium.” However, a few important issues may require closer scrutiny in order to gain a balanced understanding of THAAD deployment in South Korea.

As pointed out by Chinese analysts, it is probably true that the interception altitudes of THAAD match the “terminal phase” of longer-range Chinese ballistic missiles, or those with ranges exceeding 3,500 km, including China’s ICBMs. Of note, however, is that these Chinese missiles are not intended for targets in East Asia. If launched, they are unlikely to have their “descending” or “terminal phase” in this region. So they are less likely to be intercepted by South Korea-based THAAD.