THAAD: The Moment of Decision Has Arrived 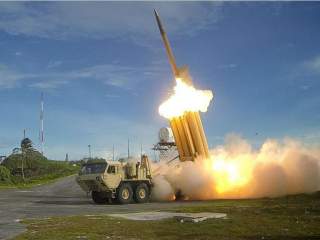 On January 5, North Korea conducted its fourth nuclear test. Pyongyang also conducted another submarine-launched ballistic missile ejection test in December of last year, demonstrating that the Kim regime is intent on developing deliverable nuclear weapons that can hit the United States. Yet, China, which can do the most to clamp down on North Korea, is still refusing to do so, despite the deterioration in Beijing-Pyongyang relations over the last few years. To be sure, China began to implement UN sanctions after North Korea’s third nuclear test in February 2013—except that Chinese trade with North Korea grew by 10.4 percent in 2013 and by 4.9 percent in 2014. In 2015, China-North Korea trade decreased by 15 percent, but the decline was due to the slowdown in China’s economy. In fact, Beijing has been working to improve relations with Pyongyang since late 2014 and early 2015.

Instead of pressuring the Kim regime, China wants to restore a “normal,” and perhaps even still “special,” relationship with North Korea, although the upward trajectory in Beijing-Pyongyang relations will be bumpy (as demonstrated by the recent Moranbong incident and the nuclear test). While China’s shifting position on North Korea is disappointing, Seoul now has every reason to discuss the Terminal High Altitude Area Defense system (THAAD) openly at the senior official level with the United States. Seoul also has reason to present an ultimatum to Beijing: Clamp down and remove the North Korean nuclear and missile threats by any means necessary, or South Korea will exercise its sovereign right to deploy the missile defense system in response to the growing danger posed by the Kim regime.

THAAD is an anti-ballistic missile system designed to destroy short- to intermediate-range ballistic missiles during their terminal phase. The system is a topic of much public debate in both South Korea and the United States, given North Korea’s continuous development of nuclear and missile capabilities. Yet Beijing adamantly opposes the deployment of THAAD, warning Seoul to “take account of China's concerns and worries,” thereby attempting to wield a veto over South Korea’s sovereign decision making. While the deployment of the system would not seriously affect China’s nuclear second-strike capability vis-à-vis the United States, China fears that the deployment could lead to greater U.S.-Japan-South Korea trilateral security cooperation, by integrating the Korean peninsula-based defense systems with U.S. and Japanese sensors in northeast Asia. Especially given the potential for dual use of THAAD to monitor missile launches from both North Korea and northeastern China, Beijing perceives potential introduction of the system in northeast Asia as Washington’s broader effort to forge a trilateral coalition to contain China’s rise.

Because South Korea has been seeking China’s cooperation on North Korea, Seoul, at least at the official level, has been maintaining a policy of “strategic ambiguity,” with “three ‘no’s” regarding THAAD: no request for deployment from the United States, no consultation with the United States and no decision. Moreover, South Korean president Park Geun-hye has been working assiduously to improve Seoul’s relations with Beijing. Park has held six bilateral meetings with Chinese President Xi Jinping over the past few years, and even stood with him and Russian President Vladimir Putin during the military parade in Tiananmen Square celebrating the seventieth anniversary of the end of World War II. Yet South Korea’s efforts, to date, have not paid off. Beijing is openly and earnestly seeking to restore its relations with Pyongyang, to maintain North Korea as a strategic buffer in response to deteriorating U.S.-China and China-Japan relations. At the same time, Pyongyang is continuing its efforts to develop greater nuclear and missile capabilities.

Hence, as President Park, Defense Minister Han Min-koo and others intimated recently, South Korea should now have reasons to go beyond internal deliberations and actually begin to discuss THAAD openly at the senior official level with the United States. That would allow them to move toward better protective measures against North Korea and send a much stronger message to China: that Beijing has no right to interfere with Seoul’s sovereign right to discuss and address its own defense needs. In addition to opening official discussions on THAAD with the United States, Seoul should quietly lay down a grand ultimatum to Beijing: China could utilize all means available to help dismantle North Korea’s nuclear and ballistic missile programs or face the deployment of THAAD on the Korean peninsula in response to the increasing danger posed by the Kim regime.

Even without nuclear-tipped missiles in its arsenal, North Korea would pose a threat to the South, and U.S. forces on the Korean peninsula with thousands of conventional rockets, missiles and artillery pieces, necessitating some missile defense measures to provide a degree of protection. On balance, however, the benefits of removing North Korea’s nuclear capabilities, along with the intermediate and long-range means of delivery, would outweigh the costs of not having THAAD as an additional layer of defense. To add an incentive, Washington and Seoul, conditioned on Beijing’s tangible contribution to removing the nuclear and missile threat posed by Pyongyang, should offer to release a joint statement clearly articulating that, if Korean unification occurs, no U.S. troops will be present north of the current Korean demilitarized zone, that the wartime combined forces command will be dissolved and that most U.S. ground troops will be withdrawn from the Korean peninsula.

The ultimatum element—the “stick”—would indirectly target one of Beijing’s main geopolitical fears: the possibility that the deployment of THAAD on the Korean peninsula might eventually lead to the formation of a unified bloc of the United States, Japan and South Korea. Beijing’s own charm offensive toward Seoul over the last few years has been keen on preventing such an outcome by seeking to capitalize on the difficult state of relations between Japan and South Korea and flourishing economic ties between China and South Korea; Beijing perceives the U.S.-South Korea alliance as the “weak link” in the United States’ hub-and-spoke system of alliances in Asia.

For China, the costs of a better-coordinated U.S.-Japan-South Korea bloc rising could conceivably outweigh the benefits of maintaining North Korea, a stubborn, unpredictable and troublesome “ally,” as a buffer. The recent and timely breakthrough between Seoul and Tokyo regarding the “comfort women” issue should also indirectly help to heighten Chinese fears regarding greater U.S.-Japan-South Korea cooperation, regardless of whether or not greater security cooperation actually emerges between Seoul and Tokyo, and even if Pyongyang were to be the primary reason for such cooperation. At the same time, the mentioned proposal to restructure a post-unification U.S.-South Korea alliance, conditioned on China’s cooperation, would serve as the carrot. With a right combination of incentives and disincentives, the United States and South Korea could bring China to truly clamp down on North Korea, however unlikely such a prospect may seem.

Given that China supplies much food and energy aid, and accounts for approximately 70 percent of North Korea’s total trade volume, Beijing holds a powerful lever against Pyongyang and could do much to help solve the nuclear conundrum on the Korean peninsula. Even China, however, will not be able to immediately and completely dismantle North Korea’s nuclear and missile programs. No country in the world, let alone North Korea, will ever capitulate completely without a price. Instead, South Korea should request that China do whatever it takes (for example, by providing protection for North Korean refugees and by cutting off all trade and aid) to force North Korea to immediately suspend its nuclear and missile programs, partially destroy some portions of its nuclear or missile-related facilities, allow international inspectors for periodic examinations and return to the Six-Party Talks with a pledge to denuclearize and disarm completely. China could also use its political and economic tools as a leash throughout any resumed negotiations to ensure that North Korea sticks to any prior commitment made and does not walk away from the table with undeserved concessions.

The United States, for its part, has nothing to lose from South Korea pursuing a grand ultimatum, and should privately urge Seoul to do so. If China takes tough measures to clamp down, then there might be a renewed possibility of dismantling the Kim regime’s nuclear and missile capabilities. At the least, Pyongyang would be weakened and isolated, while Beijing would face the most blowback from the Kim regime. Chinese cooperation on North Korea might even help pave the way to discussions with the United States and South Korea on North Korea–related contingency scenarios and unification. If China refuses to remove the North Korean threat, Seoul and the South Korean public will have received a clear signal that China, in the end, is not the answer to dealing with North Korea. In such a case, Seoul will have no choice but to exercise the sovereign right to deploy THAAD, to assist in protecting South Koreans and U.S. forces in Korea, and should be more willing to participate in greater U.S.-Japan-South Korea trilateral security cooperation. Such cooperation ultimately could expand to other areas (for example, the South China Sea) to add to the strength and growth of the U.S.-ROK alliance and the U.S. “rebalance” in Asia. Whatever the Chinese reaction to the ultimatum, the United States and its allies win.