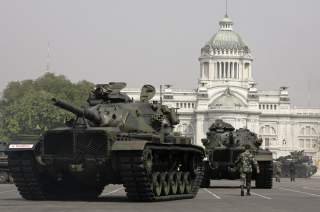 This was the peculiar situation where RTN’s new influx of principal surface combatants in the 1990s comprised Chinese new-builds and Western second-hands. The Chao Phrayas possessed strong anti-surface warfare (ASuW) but weak anti-air (AAW) and anti-submarine (ASW) capabilities. The ex-U.S. Navy Knox was known for its strong ASW outfit. Hence, these two classes complement each other. However, the RTN was not truly satisfied with the Chinese frigates—suboptimally-functioning systems and breakdowns being commonplace.

What Thailand’s navy faces is a persistent funding issue that obliges it to turn to the most cost-effective solutions available. Heeding lessons learned from the Chao Phraya program, the RTN turned to China for its follow-on principal surface combatants—the Naresuan-class, again based on the Jianghu. Instead of a fully Chinese-made suite of systems, the Naresuan envisaged a Chinese hull fitted with a mixture of Chinese and Western systems. In fact, most of the primary sensors and combat systems are Western in origin. Systems integration and correspondingly costs, present a greater challenge, such that the RTN only got two Naresuans. Nonetheless, the RTN was more satisfied with the results this time. This pilot experiment somewhat validated the feasibility of attaining cost-effective solutions through mating a Chinese hull with both Chinese and Western systems.

Buoyed by the success of the Naresuan project, the RTN then moved on with the Pattani-class offshore patrol-vessel program, which again mated a Chinese hull with a mixture of Chinese and Western systems. Through these programs, RTN planners became more confident of the quality of Chinese-made products. Senior RTN officers opined that while Chinese makes still pale in comparison with their Western contemporaries in terms of overall technological sophistication and quality, they still fit well within the RTN’s operational requirements, at a more competitive price tag.

It is therefore unsurprising that the Thais would choose China for its submarine requirements. Again, given a choice of affordability, the RTN would have settled for the more preferred Western, followed by South Korean and Russian designs. However, with the available budget, the navy could only afford one Western-built submarine with no guarantees of technology transfer or a comprehensive package deal that covers training, equipment and associated support. The Chinese offer was too hard to resist—it comprises three boats, fully equipped as part of a comprehensive package deal, and perhaps more importantly Chinese assistance in setting up a dockyard in Thailand to cater for local MRO services. Operationally, the RTN would get a functional fleet of three boats, of which at least one could be deployed at any point of time. Such fleet availability would not be possible if the navy gets only one—or at best two—Western-built submarines.

Politics do play a critical role in the arms-acquisition processes. But it may also be easy to neglect or overlook the pragmatic aspects of building and sustaining a functional military capacity. Thailand’s experience with Chinese military hardware was not without its trials and tribulations. Over time, exposure to Chinese equipment—the level of sophistication and quality, having seen improvements in recent years, will play a crucial role in balancing Thailand’s prevailing defense-funding constraints and operational needs. Simultaneously, as a result of recurring military coups in the country, Thailand’s access to much of the Western military hardware has been often times complicated and used against Bangkok as a coercive tool to compel a return to democracy. Against this background, Thailand’s big-ticket military acquisitions should therefore be seen with measured pragmatic realism in mind with equipment availability, cost and independent hardware sustainability—including significant technology transfers to local defense industry—represent some of the most important criteria in Bangkok’s acquisition decisionmaking. While not the only expanding arms supplier in Thailand’s diversified military hardware supplier portfolio, China has fared well in all these categories.

More broadly, Thailand’s case reflects the general approach undertaken in Southeast Asia—that effort to balance between pragmatic force requirements, domestic and external politics. External politics are often emphasized in the media for sensational headlines. But it is often the former two factors that truly matter when it comes to arms procurement.