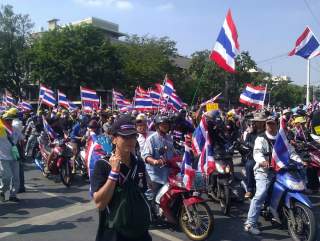 Thailand continues its slow-motion political implosion. The prime minister has been ousted and a new election has been scheduled for July 20, but the latter will settle nothing unless traditional ruling elites are willing to accept a government run by their opponents. If not, the country risks a violent explosion.

Bangkok’s politics have long leaned authoritarian. Once ruled by an absolute monarchy, Thailand has periodically suffered under military rule. Democracy finally re-emerged two decades ago. Nevertheless, the 1997 constitution created institutions of establishment control, such as the Constitutional Court. The monarchy retains outsize (though indirect) influence, and is generally allied with top business and political leaders.

But in 2001, telecommunications executive Thaksin Shinawatra disrupted the system. Campaigning as a populist, he won the votes of Thailand’s neglected rural poor to become prime minister. Those accustomed to ruling were horrified.

Thaksin won again in 2005. Instead of figuring out how to better appeal to the popular majority, his opponents organized the so-called People’s Alliance for Democracy which launched protests to topple his government. The resulting confrontation gave the military an excuse to oust the traveling Thaksin in 2006. The military regime tried him in absentia for alleged corruption and rewrote the constitution before calling new elections.

However, Thaksin’s successor party won a plurality and dominated the resulting coalition.

Thaksin’s opponents, who predominated in Bangkok, launched a wave of demonstrations, blocked Bangkok streets, besieged parliament, surrounded government buildings, and even took over Bangkok’s international airport. The security agencies refused to defend the government and the opposition-controlled courts ousted parliamentarians, including one prime minister, on dubious grounds. Establishment interests then pressured coalition partners to flip to the so-called Democrat Party (DP), which had not won an election since 1992.

But Yingluck Shinawatra, Thaksin’s sister, and her Pheu Thai party won an absolute majority in the 2011 election. So the PAD morphed into the People’s Democratic Reform Committee (PDRC), led by former DP Deputy Prime Minister Suthep Thaugsuban, one of those responsible for the 2010 killings. He demanded elimination of the “Thaksin regime” and organized mobs, which worked full-time to drive Yingluck from office. Their tactics, designed to prevent the government from functioning, reflected a mindset reminiscent of Benito Mussolini and his infamous Black Shirts. Recently Suthep called on the military to “stand by the people” and stage a coup.

In response, Prime Minister Yingluck called new elections, which further angered the opposition. The DP complained that the February poll would be “unfair.” More honestly, opposition activists admitted that they would lose. DP parliamentarian Theptai Seanapong said, “We cannot beat them.” Suthep turned his mobs loose on Election Day, blocking many Thais from voting. His attacks left enough constituencies unfilled to prevent the new parliament from taking office.

In March, the Constitutional Court effectively backed Suthep by invalidating the entire election because its opponents had prevented Thais from voting. Yingluck remained caretaker prime minister with only limited power to govern. Now the Constitutional Court has ousted her over the attempted reassignment of a government official. Suthep and his allies hope to use this ruling to force the installation of a compliant, unelected prime minister.

But leaders of the Red Shirts promised to respond violently to any judicial coup. In March, a former military officer and top Red Shirt threatened to march on the capital with 200,000 armed “guards” if Yingluck was deposed.

In the past, the widely respected king was able to transcend party factions, but he is aged and largely disengaged, while other members of the court have backed Suthep. In contrast, the Crown Prince is thought to lean toward Thaksin.

The political battle is complex, deep-seated, emotional, and personal. Thaksin has been justifiably criticized, but his opponents generate more heat than light. For instance, his corruption conviction, in absentia by a compliant court under a military regime, proves little. One can criticize Thaksin’s populist approach, but political parties around the world commonly adopt a “tax and tax, spend and spend” election strategy. Columnist H.L. Mencken once said an election was an “advance auction sale of stolen goods.” For all the faults of Thaksin’s universal health care program, for instance, it hardly seemed “corrupt.” Perhaps his worst offense was attempting to bloodily suppress the drug trade.

Similarly, Yingluck’s expensive rice support program may be unwise—it has well-nigh bankrupted the government—but also is not corrupt in any classic sense. Anyway, wealthy urban elites who benefited from past Thai government policies have little credibility faulting the rural poor for favoring their interests when voting.

Suthep denounced Yingluck as a tool of her brother, but even if she acted as his agent—his involvement in policy making is real but its extent is unknown—that does not justify the opposition’s Black Shirt tactics. Many Thais supported her because they believed she represented his views.

Ultimately, Suthep and his supporters are most interested in gaining power for themselves. A woman from the south told the New York Times: “We are the middle class, we are educated and we know best.” Some Thaksin opponents suggest abandoning “one man, one vote”. Others forthrightly advocate authoritarian rule or even an absolutist monarchy. Suthep wants to rig the political system through “reform” implemented by an unelected “People’s Council.”

The frustration of Thaksin’s supporters is palpable. Several parliamentarians elected in February—whose selection then was voided by the court—visited Geneva where they spoke with Secretary General of the International Parliamentary Union Anders Johnsson, United Nations human rights officials, and NGO members. The Thai delegation found much sympathy over the obvious assault on democracy, but those outside the country have only limited ability to influence events.

So far, Thailand’s generals have demonstrated no interest in taking control again. Richard Werly of Le Temps observed that the military “tried before and realizes that it can take power but can’t resolve the underlying problems.” Moreover, generals cannot count on the loyalty of soldiers drawn from rural areas, as well as younger officers promoted under Thaksin and Yingluck.

The only real solution can come from the political process. For instance, a Thaksin family withdrawal from politics would help ease political tensions. However, that would be more likely if Thaksin did not fear, with good cause, being targeted by his enemies. Werly suggested that Thaksin may feel he “needs to be involved to protect his investment...otherwise they will come after his money.”

It is even more essential to exclude those who have been employing violence for their own political ends, most notably Suthep and Abhisit. Their role is far more malign. The latter, at least, recently raised the possibility of stepping back as part of his new reform proposal, though the latter also would rig the electoral process in the elite’s favor. Neither should be trusted with power in the future.

Constitutional reform also might ease social conflict. Reducing the central government’s reach and devolving authority to provinces would reduce the winner-takes-all character of Thai politics, something proposed last year by a group of academics and local officials. Rural and urban populations might more easily live together if their futures were not subject to dictates from the other.

Moreover, the Thai people need to rethink the role of politics. A 2004 survey found that respondents leaned “toward majoritarian rather than strictly representative government.” At the same time, they were concerned about “the effect of diverse political views and the threat to harmony of the community posed by politically active groups.” Middle class voters seemed particularly willing to sacrifice democratic values for economic development. Yet social peace and economic growth are more likely to result from a representative, decentralized political system with only limited authority.

There is much to criticize about Thai politicians on all sides. However, it is putative authoritarians like Suthep who most risk plunging Thai society into violence. While there’s still time, the elites should pull their country back from the brink.

Doug Bandow is a Senior Fellow at the Cato Institute. A former Special Assistant to President Ronald Reagan, he is the author and editor of several books, including Foreign Follies: America’s New Global Empire (Xulon). Follow him on Twitter: @Doug_Bandow.