Thailand's Time of Troubles: Crossing Over to Cambodia 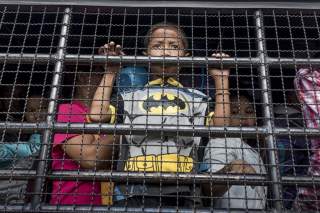 When Thailand’s military chief, General Prayuth Chan-ocha, seized power last month, it was under the assertion of easing political tensions between Thaksin supporters and opponents backed by the royalist establishment. Since November, the nation has been deadlocked in a protracted power struggle between the two factions, resulting in outbursts of deadly violence throughout Bangkok. Thailand’s twelfth successful coup—which is not a coup (according to the military at least), comes to no surprise. The country has had its fair share of military interventions since the end of the absolute monarchist control in 1932. While coup d’états have become the norm and are wielded as formidable political tools, Prayuth would like to remind everyone that Thailand is simply inconvenienced by military rule.

To lighten the mood, the Thai military junta, the National Council for Peace and Order (NCOP), has taken time out of their busy schedules to launch a “happiness” campaign. Between arbitrary arrests and forced disappearances, the military is staging street parties and music festivals. Prayuth has even penned his own ballad, which has garnered an impressive amount of views on YouTube since it was first uploaded on June 6.

While sexy army girls and free viewings of World Cup soccer make for a highly unusual public relations campaign, the general’s intent is clear: Be happy or else.

Unfortunately, over 200,000 Cambodians are unable to partake in the festivities this year. Since around the time of Prayuth’s song debut, tens of thousands of mostly undocumented Cambodian migrants have been spilling through the Thai-Cambodian border. While most of them are fleeing amidst rumors of a military-led crackdown on Thailand’s irregular labor force, many are reporting first-hand accounts of violence, arrests, raids and extortion by the Thai army.

A quick jaunt to the Cambodian border town of Poipet not only confirms the rumors, but also reveals a steady stream of overcrowded farm trucks, Thai detention vehicles and buses depositing thousands of workers and their children into Cambodia. Poipet has effectively become an aid camp teeming with soldiers, doctors and relief agencies. The Cambodian People’s Party (CPP) has mobilized 150 military trucks to transport migrants back to their home province.

At least nine migrants have reportedly died in Thailand—most of them are victims of traffic accidents. However, Cambodians remain skeptical of the circumstances surrounding the deaths. On June 12, the Cambodian Human Rights Action Committee (CHRAC) released a statement that “ADHOC investigators have received credible witness accounts up to nine Cambodian migrants have been killed, and that beatings have occurred at the hands of the Thai armed forces." Cambodia’s Minister of Interior Sar Kheng was reported as saying that Prayuth should be held responsible for the loss of lives.

The crackdown—which is not a crackdown (again, according to the government)—has now left many grappling with an uncertain future. Cambodia also stands to lose millions of dollars in remittance and must cope with an overwhelming number of jobless migrants.

While Cambodia appears to have a low unemployment rate, there are very few options available aside from agriculture, which is seasonal and low paying. Cambodia’s garment industry is no better. Factory workers launched over 130 strikes last year in pursuit of higher wages and better work conditions. In January 2014, armed troops fired live ammunition on a group of demonstrators, killing four people in Phnom Penh. In another part of the city, twenty people were wounded after being struck by batons.

All this is apparently lost on Kousoum Saroeuth, the governor of Banteay Meanchey province. Saroeuth reported that while he felt sad for the migrants, he was hopeful they could fill garment positions. “The province has three special economic zones. One factory needs 5000 workers but only 2000 people have applied,” Saroeuth said. “We need our people to help bolster the economy.”

Cambodia’s growth actually remains robust amidst political tensions and labor unrest. GDP grew by 7.2 percent in 2013 from the previous year. Still, the garment sector is a key driver of Cambodia’s economic growth. With hundreds of factory workers fainting and a continued push towards higher wages, Saroeuth’s comment suggest a willful blindness that mirrors that of many politicians when it comes to one of the largest sociopolitical problems plaguing Cambodia.

The garment strikes and the mass exodus of migrants have certainly not escaped Sam Rainsy, a Cambodian politician and president of the Cambodia National Rescue Party (CNRP)—a merger between the Human Rights Party and the Sam Rainsy Party (SRP). Rainsy went into self-imposed exile in 2005 after facing multiple defamation charges yet resurfaced on July 19, 2013 following a royal pardon at the request of Hun Sen, Cambodia’s Prime Minister and head of the CPP.

Ironically, both men have filed various lawsuits against each other over the years. In 2004, Rainsy accused Hun Sen of plotting his murder and conspiring to kill several SRP members. Hun Sen replied with a defamation lawsuit over Rainsy’s allegations of CPP involvement in the 2004 murder of SRP-affiliated union leader Chea Vichea.

In 2005, Rainsy filed lawsuits in both France and the United States accusing Hun Sen of being involved in a 1997 grenade attack on an opposition rally that left sixteen dead and more than 150 injured. A second criminal complaint was filed in the United States in 2010.

The attack and subsequent FBI investigation have notably faded into the background with Rainsy’s return—a return that came nine days before Cambodia went to the polls. During this time, various U.S. lawmakers lobbied the Obama administration to cut off about $70 million worth of aid to Cambodia if the elections were deemed unfair.

Cambodia, which relies heavily on China for foreign assistance, shrugged off the threats and declared Rainsy ineligible to participate in the elections. Nevertheless, the CNRP, led by Kem Sokha, launched an aggressive campaign supported by tens of thousands of Cambodians vying to unseat Hun Sen.

The outcome saw CPP taking victory, which prompted accusations of electoral fraud. Rainsy launched a series of demonstrations and has since aligned himself with the garment strikers.

What has gone largely unnoticed is Rainsy’s connection with a few powerful friends in the United States—namely, the International Republican Institute (IRI).

Former IRI program director Ron Abney was present at the 1997 rally and subsequently injured in the attack. In a 2008 statement, Abney accused Hun Sen as being “the supreme and ultimate puppeteer of all that happens in Cambodia,” and called the FBI investigation a “sham and a farce.”

Abney is not alone. Various U.S. politicians, including Kentucky Senator Mitch McConnell, have blasted Hun Sen, while revering Rainsy and his allies. In 2002, IRI chairman and Senator John McCain called Rainsy a “genuine hero for the entire world” and presented him with the IRI-Heritage Freedom Award. In the same year, the IRI funneled $450,000 worth of funds from the U.S. Agency for International Development (USAID) to further strengthen the Cambodian Centre for Human Rights (CCHR), a nongovernmental organization formerly led by Sokha, who then served in the Funcinpec party. The CCHR reports to the IRI on various political issues, including electoral processes. Reports indicate that the IRI has previously provided financial assistance to the SRP. Joel Brinkley, author of Cambodia’s Curse: The Modern History of a Troubled Land, reported that Paul Grove, the former director of the IRI’s Asia division, lauded Rainsy as “the Aung San Suu Kyi of Cambodia.”

Rainsy-supporters were nowhere to be seen at the Poipet border when the opposition leader was turned away. Subsequently, returned workers will have to do without Rainsy’s cash donation of $7.50.

Aligning with the CNRP is not in the cards. Migrants report that they will return to Thailand once an interim government is set up. Cambodians have long played an instrumental role in contributing to Thailand’s 4.3 million-strong foreign workforce. As the Thai economy teeters on the verge of a recession, the latest round of military junta antics has nothing to do with saving migrants from horrific conditions, but more to do with viewing Cambodians as a threat.

The idea that Cambodia could align with Thaksin supporters has been circulating for some time. In 2009, Thaksin was appointed personal advisor to Hun Sen and economic advisor to the CPP, a post that lasted roughly nine months. During this time, a safe house was offered to Jakrapob Penkair, a prominent red-shirt leader who is now conducting interviews from Phnom Penh. In 2012, Hun Sen played host to a Thaksin rally held in Angkor Wat.

As the Pheu Thai Party vies to set up a government in exile, Hun Sen publicly announced that Cambodia will not be involved. Still, tensions are rising between the two nations after the NCOP recently erected a barbed-wire fence near Preah Vihear, a long-disputed temple that has drawn violence from both sides.

If Prayuth is gunning to avoid another descent into chaos, his tactics seem grossly out of place—Thailand and the rest of the ASEAN bloc are supposedly moving towards regional integration. While Prayuth may have effectively silenced a polarized nation, the ripples that he and other leaders are causing remain to be seen.