Thank You for Sharing: A Rare Counterterror Win for U.S.-Russian Relations 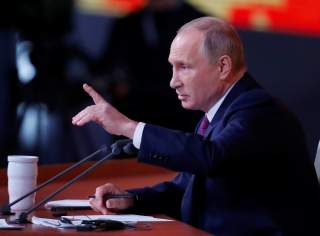 In international relations, just as in human affairs in general, perceptions are quick to form and slow to change, even in the face of contrary evidence. It therefore would be a mistake to regard the Kremlin’s announcement on Sunday—saying the Central Intelligence Agency had shared threat intelligence with Russia’s special services that allowed them to prevent a deadly terrorist attack—as a breakthrough in the fraught bilateral relationship, knocking a hole in Moscow’s perception that the United States is intent on weakening and overthrowing the Russian regime. Nonetheless, the news is an important indicator that the United States and Russia remain capable of limited cooperation in areas where their interests overlap, despite their deep mutual suspicions.

The announcement that President Putin had telephoned President Trump to thank him for the CIA’s information is a sign that the Kremlin sees this as more than the quotidian sharing of threat intelligence. According to a Kremlin press release, Putin told Trump that it had led to the arrest of a group of suspects planning to bomb the historic Kazan Cathedral in downtown St. Petersburg, Putin’s hometown and Russia’s second-largest city. Russian state television reported that the suspects were part of an Islamic State terrorist cell that intended to use suicide bombs in the operation. Putin asked Trump to extend his gratitude to CIA Director Mike Pompeo for his agency’s help in the matter, according to the Kremlin statement, and assured Trump that Russia would immediately share any information regarding threats to the United States or its citizens.

This is far from the first time that the United States and Russia have shared important threat intelligence. In fact, Putin’s first bilateral meeting with President George W. Bush in July 2001 included an extensive discussion of counterterror cooperation, with Putin warning Bush about the dangers to both countries of Islamic terror along Russia’s southern periphery, and proposing that Washington and Moscow work together against Al Qaeda. A few months later, on September 9, Putin called Bush to warn urgently about the implications of the assassination that day of Ahmed Shah Massoud, a leader of the anti-Taliban Northern Alliance in Afghanistan. Russian intelligence officials believed Massoud’s assassination portended the start of a broader terrorist campaign, and that an operation “long in preparation” was imminent. The months following the September 11 attacks in the United States marked the peak of U.S.-Russian intelligence sharing, highlighted by a joint presidential daily briefing of Bush and Putin by the CIA at Bush’s ranch in Crawford, Texas.

Since then, intelligence sharing has diminished as bilateral disagreements have accumulated and significant differences have emerged in how each country defines terrorism. U.S. officials grew increasingly concerned that Russia was too quick to label legitimate Chechen political opposition as terrorism, and too brutal in its counterterrorism methods, while Moscow came to believe that the United States was secretly supporting Chechen “freedom fighters” with money, arms and advice. In a national address after a terrorist attack on an elementary school in the southern Russian town of Beslan that killed hundreds in 2004, Putin all but explicitly accused the United States of complicity, bitterly denouncing those who “want to tear off a big chunk of our country” and others who “help them to do it . . . because they think that Russia, as one of the greatest nuclear powers of the world, is still a threat, and this threat has to be eliminated.”

It is the nature of intelligence that failures are often made public, while success tends to remain private. The fact that the St. Petersburg operation was a rare publicized success is no small matter politically, particularly as Putin begins his campaign for reelection next spring. Whether this success marks a turning point in the broader bilateral relationship, however, will depend to a great degree on reining in expectations and dealing realistically with the numerous obstacles to genuine cooperation. If both sides can keep their ambitions for the relationship modest, viewing this success not as a breakthrough but as one step in a long process of rebuilding trust and averting calamity, we might avoid repeating the cycle of inflated hopes and dashed expectations that has plagued U.S.-Russian relations for the past twenty-five years.