Thanks To Coronavirus, America's Economy Balances On A Knife Edge 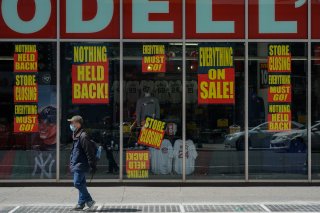 The U.S. economy today balances on a knife-edge. If it reopens too aggressively, it runs the risk of another rise in infections and the need for a renewed lockdown. If, however, it fails to reopen sufficiently, the huge recessionary pressure already so evident will metastasize into a more fundamental and entrenched economic malaise that will not only demand different, more extensive policy support than Washington has already put in place but also a much longer period for recovery than most now expect.

The immediate economic pain of the shutdowns and quarantines has become increasingly evident in recent weeks. Retail sales fell 8.7 percent in March alone even though the quarantines and shutdowns only began in the middle of the month. That one-month drop more than wiped out all the gains of the past year so that sales levels in March stood 6.2 percent below year-ago levels. When data for April becomes available, it will almost certainly look worse. Sales of new homes in March fell about 15 percent, while businesses cut orders for new capital equipment at double-digit rates. Most telling, the Labor Department reports that during the last five weeks some 33 million people have made claims for unemployment insurance. That amounts to some 20 percent of the nation’s workforce and suggests that the Department’s disturbing April estimate of unemployment at almost 15 percent of the nation’s workforce likely understates reality.

The nation is in recession no matter how one looks at things and whatever technical definitions economists and statisticians wish to apply. So far, Washington has responded to the pain on the not unreasonable assumption that the quarantines and shutdowns will begin to lift soon and relieve at least some of the recessionary pressure. Accordingly, the massive $4 trillion in fiscal and monetary stimulus aims less at building renewed economic strength than at helping people and businesses bridge the immediate pressures of the emergency so that all can quickly get back to work as soon as progress against the pandemic allows the authorities to lift today’s strictures.

Three examples of the complex of policies put forward by the government and the Federal Reserve (Fed) should suffice to capture the immediate and fundamentally temporary intent of recent actions. By extending unemployment insurance to people not usually eligible and paying a greater amount over a longer time frame, the hope is that people will resist as much as possible the temptation to reduce their living standards during the emergency and feel confident enough when the emergency lifts to resume spending quickly. With a similar objective in mind, the Federal Reserve (Fed) has reconstituted what it calls its Term Asset-Backed Lending Facility (TALF) to support credit card and other consumer lending. The administration has also implemented the Payroll Protection Program that extends loans to small business to keep people on payroll for as long as possible. It even forgives the loan if borrowers use it for that purpose. The Fed has extended something like it to medium-sized businesses.

But such policies, designed as they are to bridge the emergency, will lose their potency the longer the shutdowns and quarantines last. No matter how generous Washington is with lending and benefits, the loss of business revenues implicit in this situation will, if it lasts long enough, convince firms to abandon short-term adjustments, make more drastic and lasting staff cuts, and shutter facilities that they might previously have maintained in the hopes of a quick return to business. These more lasting lay offs would force people to downgrade their lifestyles and be less inclined to spend or seek work even after employment prospects improve. Other firms will simply go bankrupt, leaving their workers bereft of income or any hope of a return to work there. The loss of these companies will take from the economy a previously existing source of economic strength. Once matters reach such a point, the economy will have lost the ability to snap back. Recovery then will require rebuilding, an effort that will demand a new set of policies and a good deal more time to accomplish than is presently contemplated.

Despite the horrible economic news rolling out of the statistics mills in Washington, the economy does not yet face this last, most sinister prospect. Anecdotal allusions to plans—either from individuals or business leaders—suggest that few if any have made the shift to more permanent staff cuts and shutdowns of facilities. Preliminary data suggests that bankruptcies have risen but not yet at an alarming rate. Nonetheless, with unemployment rising at a formidable pace and sales—both wholesale and retail—in free fall, this more dangerous risk on the economic horizon cannot be far from becoming a reality.

It would seem then that if the quarantines and shutdowns persist for another month, two at the outside, the country will indeed face this dire prospect. If the economy is to avoid this future, the reopening presently being considered must then proceed aggressively enough to stem the flow of economic loss but not so aggressively that it fosters renewed contagion, and the round of lockdowns and quarantines that would accompany it. The county indeed balances on a knife-edge. Perhaps the best news is that leadership—in Washington and state capitals—seems increasingly aware of the delicate balancing act it faces.