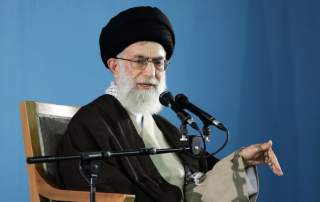 In our public-relations driven political culture, once the administration in power decides on a significant policy issue, it moves to oversell it at home and abroad, exaggerating the benefits and downplaying the problems. The just-announced Iran nuclear framework agreement is a clear illustration.

The administration is describing this agreement using hyperbolic language. The President has described it as “historic,” claiming that:

But beyond hyperbole and spin, there are four reasons why this agreement is flawed and poses significant risks:

First, using the so-called fatwa by Iran’s Supreme Leader Khamenei as an indicator of Iran’s true intentions— present and future—is a mistake. A far better case can be made that the acquisition of nuclear weapons capability has been and remains Iran’s objective.

Additionally, Iran does not need the enrichment capabilities it retains under the agreement, because it has only one power reactor with a long-term fuel supply arrangement with Russia.

The logical assumption is that Iran has been pursuing civilian power to acquire the capability for nuclear weapons—using the former as the cover for the latter. Although Iran has signed the Non-Proliferation Treaty (NPT), which requires a commitment not to seek nuclear weapons, it is clear that Iran has had a clandestine nuclear weapons program, that it has been and might still be working on nuclear weapons design at undeclared and dedicated facilities, and that the International Atomic Energy Agency (IAEA) inspectors have yet to get to the bottom of it because of the lack of Iranian cooperation.

After the Gulf War, Iranian leaders such as Hashimi-Rafsanjani argued privately that for Iran to avoid the fate of Iraq, it needed to acquire nuclear weapons. After the U.S. invasion of Iraq in 2003, Iran feared that it might be the next U.S. target and it slowed down its nuclear program. Then, with increased U.S. difficulties in Iraq—in part fostered by Iran—it was again emboldened, expanding its nuclear program in defiance of several UNSC resolution calling for it to suspend its various weapons related programs.

Khamenei’s alleged Fatwa is vague and subject to different interpretations. Doctrinally, Iranians are allowed to dissimulate to mislead and reassure their enemies in order to surprise and defeat them. Besides, there is nothing to prevent Khamenei or his successor from issuing a new fatwa after the acquisition of nuclear weapons, declaring this a great victory against “domineering powers who want to keep Muslims down” and blessing it.

The president ought not reference a Fatwa issued by a hostile leader whose regime has a long record of deception and evasion. It is far safer and more evidence-based--when one examines Iranian behavior over the last 35 years--to assume that Iran remains committed to the acquisition of nuclear weapons, but that economic and political necessities have forced the leadership to seek the easing of sanctions in exchange for limited and perhaps tactical concessions.

These are the principal risks with the framework agreement:

a) The limitations on Iran are time bound--10 years in case of uranium enrichment and 15 years for plutonium. Iran will be free to expand its program as it wishes after these dates. In terms of a U.S. administration trying to appear that it has achieved a breakthrough, ten to fifteen years may sound long, but in the life of nations, this is actually very short;

b) The administration’s statements indicate that it is counting on Iran’s obligation under the NPT to prevent Iran’s acquisition of nuclear weapons over the long term. The Iranian record on NPT is hardly reassuring. The Administration’s apparent assumption that Iran will change its behavior under NPT is surprising since Iran has been in violation of both NPT and several UNSC resolutions. Why we should believe that Iran will act differently in the future is not clear.

Some have commented that the short time horizon might not be risky since Iran may have a different regime by then –perhaps one more cooperative with the U.S. and less interested in nuclear weapons. Anything is possible, certainly, but this vague hope hardly forms a good basis for a risky agreement, particularly given Washington’s reluctance to offer even moral, much less tangible support to Iran’s democratic opposition.

Even if the assumptions informing the framework agreement are correct and the agreement is fleshed out in detail and implemented, the world gets at most an additional 9 months before Iran can have a bomb. The Administration states that Iran at present is three months from producing enough fissile material sufficient for a bomb. This comes at the price of encouraging several other states to move from a timeframe of several years to one year. On balance, in the volatile Middle East region, this agreement likely will not help the cause of non-proliferation.

Third, the president is counting on the efficacy of inspections—believing that Iranian efforts to cheat or deceive will be discovered and exposed in a timely manner, allowing the United States and its partners to prevent Iran from acquiring nuclear weapons. This is a tall order. The history of international inspection regimes and the record of our own intelligence agencies in this regard are mixed at best. The details of the inspection regime for the final agreement with Iran have not yet been made public, so a full evaluation cannot be made at this time.

But history shows that as the technology and techniques for gathering intelligence and inspecting changes become more sophisticated, so does the ability to conceal and deceive. Iran can, or may already have, built another facility producing highly enriched uranium or plutonium underground in a remote or even in a central part of Iran without our knowledge. It would be prudent to have more modest expectations from inspections, especially when dealing with a determined and sophisticated country. Of course, we could get lucky and have someone in the heart of Iran’s nuclear program work for us and provide information. But we cannot count on luck.

Fourth, the framework agreement assumes that if Iran violates the deal, the sanctions that were lifted can be re-imposed—or can snap back into place. The Administration’s discussion of snap back makes the re-imposition appear automatic or almost automatic. As of now, it is unclear what the dispute resolution mechanism for charges or suspicions of a violation by Iran would be. Iran may have its own demands with regards to sanctions removal.

Also, will Russia and China agree to automatic re-imposition of UNSC sanctions if Iran violates the term of a final agreement? What would the mechanism be for determining that a violation has occurred? This has the potential to become protracted and difficult if all parties, including Russia and China, would have to go along—especially given the state of our relations with Moscow. Such a process can impact the timeline of Iran’s distance to a bomb.

Even our European partners are likely to push for time and compromise with Iran to avoid the re-imposing sanctions and foregoing the benefits of trade and economic relations with Iran. It took a long time and a great deal of effort to get where we are and to impose the sanctions now in place. Once eased, it will be very difficult—if not impossible -- to reinstate the rapidly.