The 5 Most Powerful Russian Weapons of War in the Sky 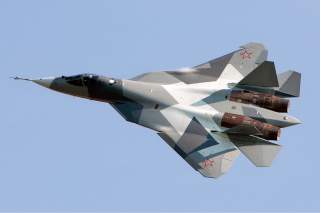 Editor’s Note: Please see previous works from our “Weapons of War” series including the Five Best Weapons of War from the Soviet Union, Russia’s Military is Back, and Five Taiwanese Weapons of War China Should Fear.

During the Cold War, the Soviet Union established the largest air force in the world. Fed by a number of energetic state aviation design bureaus, particularly Mikoyan-Gurevich, Sukhoi and Tupolev, the Soviet Air Force was a powerhouse that enjoyed not only numbers and high technology but also that rare commodity in the Soviet bloc: innovation.

The collapse of the Soviet Union in 1991 meant the new countries that sprung up to replace it inherited thousands of fighters, attack planes, bombers and transports. Russia inherited the lion’s share of the old Soviet Air Force. Some of the old design bureaus survived—barely—the lean years of the 1990s and early 2000s.

After nearly a quarter century, Russia is clawing back as an air power. The air force is finally taking deliveries of new multirole aircraft, and Sukhoi is on the verge of fielding a brand new fighter. These planes, as well as upgraded older planes, will form the backbone of the Russian Air Force for decades to come.

Russia’s most ambitious aviation project since the end of the Cold War, the PAK FA, is the country’s first fifth-generation fighter design. PAK FA stands for Perspektivnyi Aviacionnyi Kompleks Frontovoi Aviacii, or Advanced Frontline Aircraft System. A product of the Sukhoi bureau, responsible for such stalwarts as the Su-17 Fitter and Su-27 Flanker, PAK FA began development in April 2002 after Sukhoi won the development tender for a new fighter design.

Resembling a Su-27 Flanker with flattened and facet surfaces, PAK FA will be stealthy. Supercruise, the ability to cruise above mach one without the use of afterburners, will be achieved through engines currently under development. The aircraft will have both an active electronically scanned array radar and an electro-optical sensor to track and engage targets. An internal weapons bay capable of carrying up to six long-range missiles, air-to-ground weapons, or a mix thereof will help reduce PAK FA’s radar signature in a combat mission.

PAK FA’s first flight was on January 29, 2010, when it flew for forty-seven minutes from the Yuri Gagarin aircraft factory in Russia’s Far East. Currently five prototypes are flying, with more than 450 test flights as of late 2013. Production for the Russian Air Force is set to begin in 2016. A variant of the fighter, the T-50, is being jointly developed by Russia and India.

India, which is contributing $6 billion dollars to the PAK FA/T-50 program, is reportedly unhappy with the state of the program. Poor quality control and performance shortfalls in the T-50 prototypes are making India uneasy. In June of this year, a T-50 prototype experienced an engine fire. The fire was extinguished and the plane was to be repaired. Sukhoi stated in a press release the incident would not affect the timing of the T-50 program.

Although the Soviet Union fielded the very popular and capable Ilyushin Il-2 Sturmovik ground attack aircraft during the war, the Soviets did not pursue the development of a dedicated anti-tank aircraft in the postwar period. Nagging doubts about the usefulness of such aircraft on the nuclear battlefield delayed the development of a successor for nearly thirty years.

The Soviet Air Force announced the intention to field a battlefield close air support aircraft in the late 1960s, and by 1972 the Su-25 prototype had taken to the skies. Like the American A-10, the Su-25 was designed to operate over hyper-lethal modern battlefield from nearby, often improvised bases.

Like the A-10, the Su-25 prioritized payload over speed. The Su-25 is best described as a bomb truck with ten hard points for the attachment of bombs, rocket launchers, air-to-surface missiles and air-to-air missiles. The Su-25 is equipped with a pair of GSh-30-2 30mm cannons for engaging ground targets.

The Su-25 has served in a variety of conflicts, starting with the Soviet occupation of Afghanistan from 1979 to 1989, the post-Soviet wars in Chechnya, the Persian Gulf War, and now the conflict in the Ukraine. The latest version, the Su-25SM, incorporates airframe upgrades, a heads-up display, GLONASS satellite navigation, and a radar warning receiver.

Roughly 180 Su-25s are thought to still be in Russian service, with eighty to be upgraded to the Su-25SM standard by 2020.

One of the oldest planes in the Russian arsenal is also one of the most effective. The Tupolev Tu-95 “Bear” turboprop bomber is a design that is at least sixty years old…seventy if you count the fact that it is indirectly descended from the Boeing B-29 Superfortress. The Russian Air Force entrusts the Tu-95 with its longest-range missions, including flights to within fifty miles of the California coastline, the circumnavigation of Japan, and other long-range shows of force.

Over the years the Tu-95 evolved again into a maritime patrol aircraft and reconnaissance aircraft. The Tu-95’s long range and speed made it capable of scouting for fleets and convoys in the North Atlantic and then either attacking them with cruise missiles or directing other air and naval forces against them. During the Cold War, it was assumed that Tu-95 would identify American carrier task forces and then vector Backfire bombers equipped with cruise missiles against them.

Tu-95 bombers were frequently intercepted by NATO and Japanese air forces during the Cold War as they flew long-range patrols. After a hiatus, Bear bombers have started flying such patrols again, the timing of their flights often a pointed political message. On September 4, two Bear bombers flew from western Russia towards the Eastern Seaboard of the United States, in what was considered a “cruise missile launch profile”. The flight occurred during the NATO summit in Wales at which the alliance discussed the situation in Ukraine.

The last heavy bomber produced by the Soviet Union, the Tu-160 “Blackjack” was produced between 1980 and 1992. The Blackjack is Russia’s most capable bomber, able to operate at night and in all-weather conditions while carrying a large payload of nuclear cruise missiles.

In the early 1970s, Soviet Long Range Aviation specified a high-speed bomber capable of penetrating defended airspace at both low and high altitudes. It was to have good short airfield takeoff and landing capability, so that it could operate from wartime airfields. After a lengthy development period, the first Tu-160 flew on December 18, 1981.

Dubbed the “White Swan” in Russia, with its swept wing, sleek profile, and turbofan engines mounted in pods beneath the fuselage, the Tu-160 clearly drew inspiration—and perhaps more than that—from the Rockwell International B-1A bomber.

The Tu-160 has a maximum speed of 2,000 kilometers an hour and an unrefueled range of 14,000 kilometers. A probe and drogue refueling system allows the Tu-160 to be refueled by Il-78 tanker, further extending its range.

The Tu-160 can carry twenty-two tons of ordnance in two weapons bays, including the AS-15 “Kent” nuclear cruise missile. The AS-15 is a low-observable, turbofan-powered design with a range of more than 2,500 kilometers. The Tu-160 can carry 12 AS-15 missiles.

For defensive purposes, the Baikal onboard self-defense system can detect and jam enemy air defense radars. An onboard thermal detection system can detect incoming missiles and aircraft and spoof infrared guided missiles with flares if necessary.

Thirty-five Tu-160s were built before the end of the Cold War stopped production. Nineteen were stationed in the Ukraine of which 11 were scrapped under the Nunn-Lugar Cooperative Threat Reduction Program. Eight were sold back to Russia. Sixteen may be operational and or undergoing upgrades. Although not a large bomber force, together 16 Tu-160s could launch 192 nuclear cruise missiles, each with a yield of 200 kilotons. For comparison’s sake, the atomic bomb dropped on Hiroshima was about sixteen kilotons.

Built as a bridge between older Su-27 fighters and fifth-generation designs as the PAK FA, the Su-35 is Russia’s stopgap solution until a viable PAK FA fleet emerges. In some ways the Su-35 is a blending of both generations, resembling the older Su-27 but incorporating systems that will likely go into PAK FA.

The avionics, propulsion and weapons systems have been upgraded. The Erbis-E passive electronically scanned array can search for and target attack aircraft at up to 400 kilometers. An electro-optical targeting system provides infrared search and track capability to the pilot, allowing the plane to rapidly engage threats with infrared guided missiles.

For defense, the Su-35 is equipped with the Khibiny-M electronic warfare suite, as well as a KNIRTI SAP 14 and 518 jammers, which together can jam NATO radars in the D through J bands. The jammers can also broadcast false targets and imitate other aircraft.