The ABCs of Russian Military Power: A Primer for the New Administration 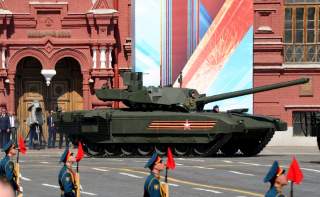 The current confrontation in U.S.-Russia relations, and increasing antagonism in the relationship, makes it difficult to separate structural changes in the European security environment from politically charged sources of conflict. Yet these changes have been profound, dating back to Russian military reforms launched in late 2008. They have serious implications for the new U.S. administration. The principal factors are Russia’s revival of the military as an instrument of national power, the unsettled war in Ukraine, and NATO’s changing posture to counter a perceived threat from Moscow’s machinations.

Seeking an improved, or perhaps simply more stable, relationship with Russia from a “position of strength” requires understanding the new military balance in Europe, the evolution of Russia’s military capabilities, and its evolving force posture. Independent of whether the proximate causes of hostility in U.S.-Russian relations are resolved, or there is a change in the broader atmospherics of the relationship, the United States must develop a strategy and policy for dealing with Russia, grounded not in optimism but in hard military realities. The previous administration suffered from a severe rhetoric-to-strategy gap, contesting Russia politically but losing strategically.

It would be safe to assume that distrust will continue to dominate NATO-Russia relations, and that even if interactions on the whole may improve—arguably, they cannot worsen—they may not produce concrete results in short order. A fact-based approach to the security situation in Europe should inform further changes in U.S. force structure and posture. Unfortunately, for the past two years discourse on this subject has been only marginally informed by reality, with policy advocacy and agendas driving analysis of the Russian military threat. Debate has often taken place either in a fact-free zone, or with new information overconsumed by a policy establishment long unaccustomed to dealing with Russia as a serious adversary. The United States has not been winning the geopolitical confrontation with Russia of late; nor has it come up with a vision for how to change the dynamics in this adversarial relationship.

Like its predecessor, the new administration will have to formulate its Russia policy in the aftermath of a crisis in European security; this is an opportunity either to make fresh mistakes, or to get things right. To succeed, the administration must base its strategy not on individual capabilities that Russia has, the individual concerns of proximate NATO members, or the designs of different constituencies within the U.S. policy establishment, but on a coherent understanding of the security dynamics in Europe and Russian military power.

Russia Has Been Busy

The Russian military that the United States faces in 2017 is not the poorly equipped and uncoordinated force that invaded Georgia in August of 2008. This is why the magnitude and potential impact of the current crisis is far greater than that inherited by the Obama administration in 2009. Following reforms launched in October 2008, and a modernization program in 2011 valued at $670 billion, the armed forces have become one of Russia’s most reliable instruments of national power. Russia disbanded the useless mass-mobilization army of the Soviet Union, consolidated what was worthwhile, and reconstituted a much smaller, but more capable force. The overall size of Russia’s armed forces continues to increase, numbering over nine hundred thousand today, while the state armament program continues to replace aging equipment throughout the force with new or modernized variants.

The reform process and a stable infusion of much-needed capital have restored war-fighting potential to the Russian military, though incomplete, and unevenly applied to the force. Moscow’s ability to sustain this spending is very much in question, faced with low oil prices, economic recession and Western sanctions. However, Russia has made the choice to defend defense spending and enact cuts elsewhere. Reductions will be made to the procurement program, but Moscow will maintain spending on nuclear modernization and long-range standoff weapons, trying to sustain the force at current levels In reality, loss of access to key components from Ukrainian and European defense industries created the most serious setbacks to Russian defense modernization (delays of about five to seven years in 2014).

Russia’s defense budget steadily climbed from to a peak of 4.2 percent of GDP in 2015. Since then, it has been in relative decline, though likely to remain above 3.7 percent, well beyond the spending levels of America’s European allies. This level of expenditure is probably unsustainable for the Russian budget, inevitably forcing its leadership to choose between weapons procurement, operations and the quality of personnel. However, the inertia of the current modernization program will have lasting effects well into the 2020s.

Bottom line, Russia can sustain this military with judicious reductions, and even if the funding base collapses, the dramatic turnaround in its armed forces is not a temporary bounce that the United States must ride out. Russia’s General Staff has been focused on drilling the force with snap readiness checks, joint exercises, large movements and annual operational-strategic exercises. From its air force to the nuclear-powered submarines of its navy, the Russian military has quickly clawed back operational readiness not seen since the 1990s.

Admittedly, the size of this force is a fraction of the Soviet colossus that NATO faced in Europe. However, most of America’s allies in Europe have either let their armed forces atrophy or cut conventional capabilities entirely from their roster, in favor of niche roles in the alliance. The United States, too, has cut its navy and army to levels that are hardly consistent with the increased likelihood of interstate conflict, which portends a need to deter great powers and maintain a large network of allies in the face of revisionist ones. That concept in and of itself is likely unsustainable, requiring a rethink of long-standing policies, and the return of strategic discipline to Washington, DC.

What Can the Russian Military Do?

As a Eurasian land power, Russia concentrates most of its firepower in the ground force, intended to counter Western advantages in air power. The Russian army can fight alone. New families of weapon systems that were being developed by the USSR in the 1980s have been completed and are being distributed across the force, enabling long-range precision strikes, air defense and marked improvements down to the individual soldier level.

Today Russia can field perhaps forty or fifty thousand troops on short notice, including airborne and spetsnaz, along with armored and mechanized infantry formations. Simply put, in any contingency on its borders, Russia is likely to be there first with the decisive military power to seize the initiative and establish superiority.

However, Russia’s ground force numbers 300,000–350,000 troops at most, and lacks an operational reserve. Since it can only field a fraction of this force, this means Russia’s military is not configured to occupy large amounts of land or replace combat losses in offensive operations. This lesson was driven home rather quickly through combat operations in Ukraine, creating strain on the Russian military rotating units through the Donbass. Practical constraints tell us that Russia’s military is not an existential threat to Europe, or even Ukraine for that matter, but that it can impose its will by force on neighboring countries and that Moscow is credible when it threatens to do so. Hence, Russia’s military is a powerful tool for coercion.

Russian doctrinal thinking, codified in a collection of concepts under the title of New Generation Warfare, shows a clear desire to advance interests through asymmetric means and subconventional approaches. Moscow is aware of its hard power limitations and prefers to avoid expensive conventional operations, instead making strategic gains through political warfare, special forces and other indirect means. There is a strong shift towards a system of nonnuclear deterrence, based around long-range conventional weapons and domains where it can readily retaliate, such as through cyber or information warfare. These are indicative of an emergent strategy, favoring agility, speed and reserving options for escalation, in order to shape the battlefield with fairly little hard military power.

Lessons learned from experiences in Ukraine and Syria are being integrated into the Russian military as it develops. Russian armed forces are still in a largely experimental phase, absorbing both chaotic reforms and the high operational tempo of combat in the past two years. Modernization has yet to hit parts of the force, but in some key areas, like nuclear weapons, air defense and long-range guided missiles, Russia has invested heavily and reaped results. Mobility is also a premium. Lessons from fighting in Ukraine and Syria suggest that Russia’s “good enough” at current readiness levels is more than sufficient to take on any former Soviet Republic on its borders, and even engage a peer adversary like NATO in a short-term high-intensity fight. Russia would struggle occupying entire states, but it can crush their militaries and readily seize parcels of adjoining land.

Looking at military capability is enough to give anyone pause, but this is a story of potential. The new Russian army has not fought en masse against anyone. Russia is one eighth of the world’s land area, with perhaps the smallest army it has fielded in centuries. Where it chooses to place its forces matters, because it tells us whom Russia intends to fight and how. From 2009–12, Russia disbanded or moved many of its units on Ukraine’s borders, and those in closest proximity to NATO members, towards the Central and Southern Military Districts.